Do you hear me knocking? Well, let me in! Finally! The People’s Red Head has come back to The Weigh-In!

UFC Fight Night 148 took place at the Bridgestone Arena Saturday, March 23, 2019, in Nashville Tennessee. It was an interesting card with most bouts going the distance. The main event was Anthony Pettis versus Stephen “Wonderboy” Thompson. The co-main event was Curtis Blaydes versus Justin Willis.

Let us dive right into it people. Pettis knocks out Wonderboy Thompson in round two, with a superman punch. What a win for Pettis who was struggling the last couple years with a 3-6 record. Pettis said he feels good at 170lbs, and this showed in the fight. While he looks forward to what is next for him, hoping that it is the winner of Edson Barboza vs. Justin Gaethje, or a rematch with Rafael dos Anjos, we will have more to come, as information becomes available.

Wonderboy does not have much to look forward to. The fall for Wonderboy has been as fast as his rise to the upper echelon of the sport. We are talking about a fighter who took former champion Tyron Woodley the distance twice. Wonderboy falls to 1-3-1 in his last five fights. Fans may forget he lost a controversial decision to Darren Till.

It is likely that Wonderboy will have to fight his way back into contention. We will keep you posted as more information on his next fight becomes available. It is worthy of note that this is Wonderboy’s first knock out loss of his career.

Blaydes redeems his loss to Francis Ngannou by dominating Justin Willis from start to finish. Willis talked a lot of trash leading up to the fight and it backfired. Blaydes will now move back up in the heavyweight division.

Special Thanks To:
Ward Bros. for Backyard Wrestling
CBS Sports for MMA and March Madness Coverage
Spittin Chiclets Podcast (Not a Big Deal)
Omaha Steaks (Just love that meat in my mouth) 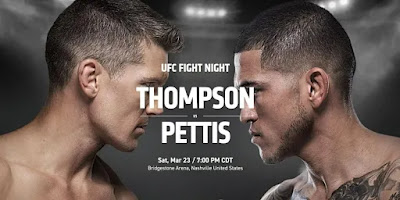