Despite the remainder of Florida essentially being completely open, WWE continues to utilize their virtual Thunderdome at Tropicana Field in what I’ve again rebranded the WWE Dystopian Era. Perhaps a blessing in disguise will be that the WWE will need to locate a new home following MLB Spring Training as the Rays will be taking over the facility - perhaps they have secured an outdoor venue where they will allow limited attendance since they are already believed to be allowing fans to attend Wrestlemania. On another significant note, this evening would also mark the final WWE pay per view on the WWE Network for those residing in North America as all of the WWE library and future pay per views will be exclusively streamed on Peacock beginning in March following a multi-billion dollar deal that was agreed upon recently. Nonetheless, we continue on the Road to Wrestlemania with the first to last pay per view stop in the form of Elimination Chamber. This event should solidify the world title picture for The Showcase of the Immortals, Wrestlemania, as both world championships were on the line among the five scheduled bouts on the card - including two elimination chamber contests.

Smackdown Elimination Chamber Match
Kevin Owens vs. Sami Zayn vs. King Corbin vs. Jey Uso vs. Daniel Bryan vs. Cesaro
Winner: Daniel Bryan
The opening contest of the main card delivered the first chamber match of the evening and would determine Roman Reigns opponent for his Universal Championship later in the show. The bout commenced with arguably the two most talented combatants, Daniel Bryan and Cesaro. After trading some vicious blows for several minutes, the men were finally joined by King Corbin who was the first to be released from his pod. Corbin managed to gain the upper hand on the two competitors using his size advantage to manhandle Bryan and Cesaro until the fourth Superstar entered the fray in the form of Sami Zayn. The first elimination of the match was delivered by Cesaro as he cinched in the Sharpshooter on King Corbin to secure the submission. Just after Corbin’s departure from the match Kevin Owens entered the fray and introduced Sami Zayn’s skull to the chamber door before delivering his patented cannonball to each of the three men in the chamber.

With Owens in control of the contest, the final competitor, Roman Reigns’ cousin Jey Uso, entered the match. Owens continued to dominate the bout as he delivered a moonsault from the top of one of the pods that left the other four competitors in a pile of visceral carnage. Owens then delivered a slew of Stunners including one to Zayn who he subsequently pinned. As Zayn left the chamber, Uso achieved the upper hand on Owens from behind and immediately capitalized with a Frog Splash for another quick elimination. As Cesaro seemed poised to attain his second submission elimination of the evening as he cinched Bryan in the Sharpshooter, he was unceremoniously greeted with a super kick to the jaw from Jey Uso who immediately scaled the turnbuckles to deliver another Frog Splash to solidify the pinfall. Uso quickly attempted another Frog Splash, this time from the top of one of the pods, to Daniel Bryan, however, he was met with a pair of knees to the stomach. Daniel Bryan promptly delivered the running knee to punch his ticket into the Universal Championship Match with Roman Reigns.

Universal Championship Match
Daniel Bryan vs. Roman Reigns (c) w/ Paul Heyman
Winner: Roman Reigns via submission
A bruised and battered Daniel Bryan had no opportunity to recover as the chamber immediately ascended to the rafters and Roman Reigns music echoed through the Thunderdome marking the beginning of the Universal Championship Match. Roman attempted to spear Bryan at the opening bell, however, Bryan sidestepped him and cinched in the Yes Lock. Bryan just didn’t have enough left in the tank to maintain the hold as Reigns broke out and pummeled him unmercifully before he finally choked him out for the submission victory. As Reigns celebrated in the ring, Edge emerged to deliver a spear to the champion and proclaimed that he would be challenging him for his title at Wrestlemania.

United States Championship Triple Threat Match
Bobby Lashley (c) w/ MVP vs. Matt Riddle vs. John Morrison
Winner: Matt Riddle via pinfall
Keith Lee was originally supposed to be a participant in this match, however, he suffered an injury on Monday Night RAW and needed to be replaced. John Morrison fought his way in as he emerged victorious over Ricochet, Mustafa Ali, and Elias in a Fatal Four Way bout on the Kickoff Show. Bobby Lashley absolutely dominated this entire contest and was seemingly poised to earn a submission victory as he had John Morrison trapped in the Hurt Lock until Riddle procured MVP’s crutch and shattered it over Lashley’s back before tossing him from the ring. This opened the door for Riddle to take advantage of Morrison as he executed the Bro Derek allowing him to earn the pinfall crowning a new champion.

Women’s Tag Team Championship
Shayna Baszler & Nia Jax (c) vs. Bianca Belair & Sasha Banks
Winners: Shayna Baszler & Nia Jax via pinfall
Following the events of Friday Night Smackdown, Belair found herself teaming up with one of her potential Wrestlemania opponents with the women’s tag team gold on the line. In another “exhilarating” Sasha Banks match, the conclusion came shortly after Reginald made his way to ringside with a bottle of celebratory champagne. Reginald passed the bottle to Sasha with the intention of her using it on Nia Jax. As Sasha lashed out at Reginald for such a suggestion, Jax seized the opportunity to hoist Banks up in the Samoan Drop to retain the tag team titles.

RAW Elimination Chamber WWE Championship Match
Drew McIntyre (c) vs. A.J. Styles w/ Omos vs. Kofi Kingston vs. Sheamus vs. Jeff Hardy vs. Randy Orton
Winner: Drew McIntyre
Unlike the Smackdown Elimination Chamber match, the stakes were even greater for this one as Drew McIntyre was one of the participants with his WWE Championship on the line. One last minute change occurred for the lineup in this match as The Miz removed himself on Monday night and was subsequently replaced by Kofi Kingston.

The first two men pitted against each other were ring veterans Randy Orton and Jeff Hardy. Jeff Hardy surprisingly brought the fight to the Viper and controlled much of the opening of the match until the champion, Drew McIntyre, entered the fray and immediately asserted himself. Kingston entered the match next and quickly trapped Orton in a surprise pinfall. Before departing the chamber, Orton delivered a pair of RKOs to Kingston and Hardy. Seeing a window of opportunity, Styles directed the towering Omos to rip the outer wall of his pod off so that he could prematurely enter the match with hopes of stealing a pinfall on one of the incapacitated participants. Unfortunately for Styles, his plan did not go as he intended and WWE officials removed his muscle, Omos, from ringside. The defending champ then proceeded to reestablish his dominance as he laid waste to all of the other participants. With bodies scattered around McIntyre, Sheamus made his way into the match as the final entrant released from his pod.

Shortly thereafter, Kingston seemed to be in prime position for at least one elimination as he took out the other four competitors with a dive from the top of one of the pods until his head was blasted with a Brogue Kick from Sheamus for the elimination. Jeff Hardy was the next victim of the match as he was met with a Claymore Kick from McIntyre who was able to easily pin him leaving us with three participants. The next elimination arrived after Sheamus leveled McIntyre with a Brogue Kick only to be surprised with a Phenomenal Forearm that lead to his swift exit from the match. Styles then attempted another Phenomenal Forearm on the champion but this time found himself on the receiving end of a Claymore Kick which allowed McIntyre to retain his title.

After the chamber was lifted from the ring, Drew McIntyre was ambushed by Bobby Lashley who cleaned the arena up with him in a vicious assault. With an apparent deal in place between The Miz and The Hurt Business, Miz promptly made his way to ringside with his Money In The Bank briefcase in tow.

WWE Championship Match
Drew McIntyre (c) vs. The Miz
Winner: The Miz via pinfall
As soon as the bell rang, The Miz pounced on the champion and immediately delivered a DDT followed by a failed pinfall attempt. With his hopes of winning the title appearing to be in dire straits, The Miz unrelentingly followed up with a Skullcrushing Finale to shock the WWE Universe and walk out of the pay per view as the newly crowned WWE Champion! 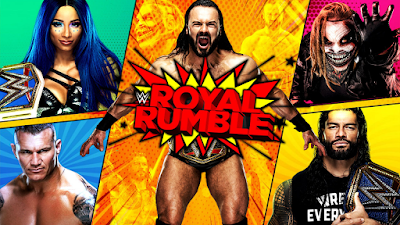