Philadelphia, PA: Philly’s Next Champ Gym in Northeast Philadelphia hosted Jerron “Boots” Ennis' media workout in preparation for his upcoming bout on January 7th at The Capitol One Arena in Washington D.C. Ennis will be squaring off against Karen Chukhadzhian for the interim IBF World Welterweight Title as the semi wind up of WBA World Lightweight king Gervonta Davis' title defense versus Hector Luis Garcia.

Upon entering the gym, it is obvious Ennis is not a coddled fighter as he sat outside the ring on a stool and wrapped his own hands. After skipping rope and breaking a sweat, Boots took his sweatshirt off to reveal a sculpted physique that showed how physically mature he has become. Calling this workout impressive would be an understatement. Ennis' display of hand speed and punching power was spectacular. A thunderous noise, just a decibel below the sound of a shotgun blast, reverberated as Boots' gloved fists pounded the pads. When Bozy Ennis begins the chore of training his son, both men are focused and tend to the business at hand. At the conclusion of the session both were drenched in sweat.

During the question-and-answer session, Boots indicated he expected a short night's work. Ennis also indicated that a bump up to junior welterweight for a title shot would not be out of the question. 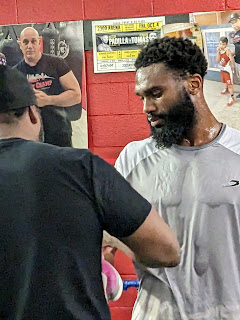 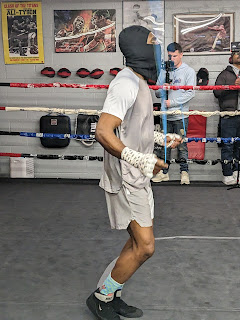