Marshall Kauffman's Kings Promotions staged a four-bout card on Friday night at South Philly's the 2300 Arena. In the feature bout, James Bernadin of Lancaster annihilated Kenny Robles of Staten Island, to obtain a unanimous 8-round decision. Approximately 750 fans came to watch fights that showed how quality, instead of quantity, will always send the consumer home satisfied.

The main event showcased Bernadin, an undefeated fighter with less than ten fights and Robles, a ticket-selling prospect. Robles, 138.8 lbs., started fast and took it to Bernadin in the first two minutes of round one. However, from that point on, the fight was all Bernadin. A dedicated body puncher, Bernadin, 138.9 lbs., continuously landed blows to the pit of Robles' stomach while mixing in strikes to the sides of his foe's torso.

During the contest, Bernadin was warned for low blows, but this did not deter his commitment to attacking Robles' midsection. Able, to stay in the pocket and deflect punches, a confident Bernadin gained momentum by initiating his offense from that position.

Although Robles was taking a shellacking, he never stopped trying to change the tide of the fight. In the last three sessions, Bernadin began stalking Robles, landing heavy wallops with both hands to the head. Finishing strong, Bernadin stunned and rocked Robles, scoring bombs off his cranium. Floundering all around the ring, Robles did all he could to finish the match on his feet - which he did.

After witnessing Bernadin fight several times on the club circuit in Eastern Pennsylvania, this scribe sees a boxer who gets wild at times, but with some fine tuning, can advance in the junior welterweight ranks. Unbeknownst to most of the boxing community, Bernadin is one of the hottest professional prospects in PA.

Two very skilled welterweights slugged it out in one of the best four-round scraps a fan could ask for. Thanjhae Teasley, Allentown, PA, 144.8 lbs., squeezed out a four-round majority decision over Jetter Burgos, Bronx, NY, 145.8 lbs. Teasley took two of the official scores, 39-37, while the third judge had it 38-38. Burgos, 1-1, lost for the first time. Teasley improved to 3-0, 2 KOs.

Light-hitting Philadelphia native James Martin, 156.5 lbs., nearly pitched a shutout against Lukasz Barabasz, of Mikolow, Poland, to commence the evening. Winning by scores of 39-37 and 40-36 twice, Martin improved to 8-3. He is scheduled to fight again on June 4th in Houston. Barabasz, 157.5 lbs., slid to 1-4, 1 KO. 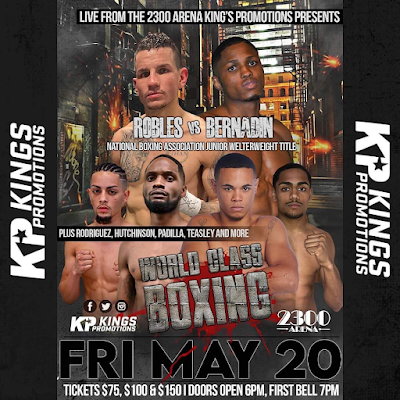 WWE returned for their first pay-per-view (sorry, “Premium Live Event” as they are labeled on Peacock) since Wrestlemania as Wrestlemania Backlash emanated from the Dunkin Donuts Center in Providence, Rhode Island. This evening’s card boasted only six matches with a mere one title contested and was headlined by a six-man tag team match which pit The Bloodline against the collective of Drew McIntyre and RK-Bro.

This evening’s card opened with a grudge match following their encounter at Wrestlemania last month. Since Cody was introduced at the last minute as Seth Rollins’ mystery opponent, Rollins has cried foul ever since claiming his loss was a fluke because he had no time to prepare. Despite my thoughts of Cody departing from AEW, the company he helped to build to return to the company where he was once bestowed with the gimmick of Stardust, Cody still put forth a solid effort against Seth Rollins in this match. In a classic back and forth battle, both competitors unleashed several of their signature moves - Rollins the frog splash and Falcon Arrow, Rhodes the Cody Cutter and Cross Rhodes, however, this match would be decided as Cody reversed a rollup pin attempt by Rollins and grabbed Rollins tights to secure the pinfall.

After Lashley was victorious over Omos at Wrestlemania, MVP would return the following night on RAW only to turn his back on Lashley and align himself with the aforementioned Nigerian Giant. Under MVP’s guidance, Omos segued his way into a rematch this evening at Backlash. Bobby Lashley dominated Omos for the duration of the match showcasing his unearthly power as he manhandled seven foot three inch giant. Unfortunately for Lashley, MVP would prove to be the x-factor late in the contest. As the referee was distracted, MVP struck Lashley in the head with his cane which allowed Omos to capitalize with a two-handed choke slam for the victory.

In another rematch from Wrestlemania where Edge was able to pull out a victory after the shocking appearance of his new cohort, Damian Priest, he found himself toe to toe with The Phenomenal AJ Styles again tonight. The difference this time would be Priest being banned from ringside following his loss to Styles this past Monday on RAW. Late in the contest, Styles appeared to have Edge in dire straits after he executed the Styles Clash and dealt further damage with the calf crusher submission. Damian Priest would make his way down the aisle stopping just short of ringside as Styles stood on the top turnbuckle. As Priest and Styles jawed back and forth, Finn Balor would attack Priest from behind to neutralize the threat. With the referee distracted, a hooded figure would emerge to shove Styles off the top turnbuckle which opened the door for Edge to cinch in a crossface submission for the victory. Following the match, the unknown assailant would enter the ring and reveal herself as Rhea Ripley.

In another return match from Wrestlemania, Charlotte Flair once again put her Smackdown Women’s Championship on the line against “The Baddest Woman on the Planet.” This time around things would be more interesting as Rousey pushed for an “I Quit” Match where one must make their opponent actually mutter the words “I Quit” in order to claim victory. These women beat each other with kendo sticks and steel chairs and attempted to make each other utter the words “I Quit” several times throughout the contest. In the closing moments, Flair introduced a chair once again which would prove to be her downfall. Rousey would turn the tide on Flair and drag her arm through the chair as she cinched in an armbar and finally made Flair exclaim “I quit” crowning herself as the new champion.

Following Moss’ win in the Andre The Giant Memorial Battle Royal the night before Wrestlemania and Corbin’s loss at Wrestlemania, the duo of Moss and Corbin finally had a falling out on RAW several weeks ago which brings us to their encounter tonight. Late in the match, Corbin executed the Deep Six but was unable to put away Moss. This would prove to be costly as moments later, Moss would propel himself over Corbin with a Sunset Flip as he stunned Happy with a pinfall.

The Usos were originally set to square off with RK-Bro tonight in a title unification bout until Roman Reigns and Drew McIntyre inserted themselves into the equation and expanded this match into a six-man tag team affair. The main event locked in at a feverish pace for the duration of the bout. In the closing moments, Riddle thought he had victory at his fingertips after he executed a top rope RKO on Jey Uso, however, Reigns had initiated a blind tag before Uso was propelled across the ring. As Riddle returned to his feet, The Tribal Chief met him with a rib-breaking spear which allowed him to easily secure the pinfall for The Bloodline. 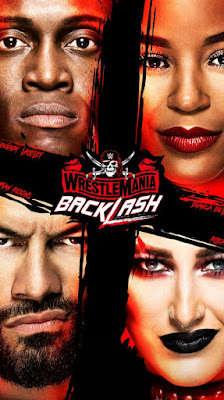