Bouncing Back: Del Rios vs Prieto

March 9th, Primal Fight Promotions presents 'Fight Night' in Robbinsville NJ. The card will take place at the Robbinsville High School Gymnasium, where the doors open at 7pm. One of the scheduled bouts is between two amateur MMA fighters: Josue Del Rios and Adam Prieto.

PFP is a growing promotion, and their third fight event will host many bouts including the meeting between Del Rios and Prieto. This will be the first fight this year for both men, and they will seek a victory to overshadow defeats from their previous fights as they battle for the 130 lb. PFP Bantamweight Title.

Josue "Saiyan Prince" Del Rios (3-4-0) is no stranger in terms of leaving defeat in the past. His first three MMA contests were all strenuous defeats, with his debut being a dramatic loss by KO in the first round. However, these mishaps did not prevent Del Rios from progressing, as he would win the following two bouts decisively while also achieving the PFP Lightweight Title.

Adam Prieto (2-4-0) had the more stark debut in the MMA world than his opponent, but he is now on a three fight losing streak. These are details that stand out in writing, yet hardly carry any significance when stepping in the cage. If Prieto's dance partner is able to win fights after suffering three losses, then it would be no surprise to see him do the same.

To describe combat sports as unpredictable and fickle would be a huge understatement. Two men enter and one leaves victorious. That's the simple reasoning why losses are almost inevitable, but come March 9th we will see who will bounce back into triumph with their hand raised at the end of the fight.

Tickets for this great night of fights are available at www.PrimalFightPromotions.com, and start at just $50. 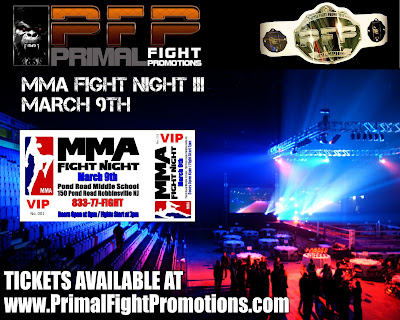