The final stop on the Road to Wrestlemania landed this evening in Cleveland, OH as WWE presented Fastlane. The jam packed Quicken Loans Arena was treated to a nine match card that featured six titles being put on the line. This show certainly delivered and gave the WWE Universe a solid glimpse of the framework for how some feuds may develop and continue on over the next four weeks leading up to Wrestlemania in New Jersey.

“The Best Tag Team in the World” sought to reclaim their tag team titles this evening after they dropped them to The Usos at last month’s Elimination Chamber event. The first "oh shit" moment of the match arrived when Shane McMahon was positioned on the top turnbuckle ready to deliver the Coast to Coast on one of the Usos, however, the other Uso brother climbed to the top of the opposite corner poised to deliver a splash to The Miz who was laid out in the center of the ring. Both men timed their jumps perfectly as Shane McMahon and the Uso collided in mid air! The conclusion of the match came as one of The Usos laid in the center of the ring and The Miz looked over to his father at ringside who gestured for him to ascend to the top rope, something The Miz is not known for. The Miz attempted a Frogsplash, however, he was greeted by a pair of knees from Jimmy or Jay Uso (I couldn’t tell which one it was and neither could the commentary team) and was rolled up for the 1-2-3. After the match, The Miz and Shane walked over to the The Miz’s father for a brief consolatory embrace. As Miz walked away, Shane McMahon clotheslined him from behind and proceeded to decimate him finally putting him to sleep with a guillotine choke in front of his father. In my anticipation, this will likely lead the two men straight into a head-to-head confrontation at Wrestlemania.

In my opinion, this match displayed how shallow the women’s division has become on Smackdown since Charlotte Flair and Becky Lynch have migrated over to RAW. Don’t get me wrong, there are some very talented and promising women representing Smackdown, Mandy Rose included, but she wouldn’t at this stage exactly be who I’d expect to see compete in a pay-per-view title match. Just moments prior to the conclusion of the match, Sonya Deville lifted the ring apron as she attempted to locate a weapon beneath the ring, however, this action would prove to be costly for Rose. Shortly after the apron was left folded up onto the ring canvas, Asuka reversed an Irish whip attempt by Rose propelling her into the ropes. As Rose arrived at the ropes she slipped on the ring apron and stumbled right into a devastating round house kick delivered by The Empress of Tomorrow. The strike which dropped Rose like a sack of potatoes, allowed Asuka to easily cover her for the pinfall and to retain her title.

After The New Day stormed Mr. McMahon’s office and demanded that Kofi be placed in the WWE Championship match, Kofi made his way to the ring as the match was announced to be for the WWE Championship. One of the ringside attendants then called for the ring announcer to come over to ringside. The announcer proceeded to proclaim that the triple threat match would take place later in the evening and Kofi was thrown into a handicap match with The Bar. The Bar engaged in a completely one-sided brutal assault as they relentlessly bludgeoned Kofi with a plethora of tandem offense. Big E and Xavier Woods attempted to come to the rescue only to have their actions thwarted by Shinsuke Nakamura and Rusev. The Bar subsequently executed a double White Noise and finally put Kofi out of his misery with a pinfall.

The tempo of this match was frenetic to say the least. Ricochet was certainly a human highlight reel in this bout. One of the highlights saw Ricochet run from corner to corner and vault himself over the ring post as he took Bobby Roode out. As Ricochet propelled himself out of the ring, however, Chad Gable had the wherewithal to tag himself into the match. Gable was subsequently overwhelmed by both members of The Revival and with no salvation in sight, was finished with the Shatter Machine as Dash and Dawson retained their titles.

This match, added during the kickoff show, was a rematch from Tuesday night when Samoa Joe won the title. Samoa Joe was able to retain his title in impressive fashion and put the exclamation point on his performance as he rolled out the way of a springboard splash attempt by Rey Mysterio and quickly cinched in the Coquina Clutch for the victory.

After imposing her will for much of the contest, Nia Jax took exception to being rolled up for the pinfall by Bayley and she and her partner proceeded to lay waste to Bayley and Banks. As the onslaught spilled to the outside, special commentator Beth Phoenix dropped Tamina after an intense staredown, but was quickly decimated by Nia Jax. As the assault returned to the ring, Natalya attempted to save The Glamazon but unfortunately suffered a similar fate. Could we see a return to the ring for the WWE Hall of Famer? Only time will tell…Perhaps as soon as tomorrow night on RAW.

This match was originally supposed to be Bryan vs. Kofi Kingston until Mr. McMahon replaced Kingston with Kevin Owens fresh off the shelf from double knee surgery. The implication earlier in the evening was that Kofi would be placed in this match, however, Mustafa Ali was shockingly the third participant. Kevin Owens frustratingly witnessed several near pinfalls slip through his fingers. First, he rolled out of the way of an 054 attempt by Ali and answered with a Stunner only to have Bryan break up the pinfall attempt. Owens was even able to execute the Pop-Up Powerbomb on Bryan and Ali to no avail. KO was finally removed from the equation by Rowan who launched him into the timekeeper’s area leaving Ali and Bryan alone in the ring. Ali attempted a splash off the top rope only to be viciously struck with a pair of knees by Bryan who was able to capitalize and pin Ali to retain his title.

This match was created after Becky Lynch’s suspension was lifted on Monday night by Stephanie McMahon. The stipulation stated if Becky Lynch could come out victorious, she would be added to the RAW Women’s Championship at Wrestlemania with Flair and Ronda Rousey. The Man, still sporting a crutch for her “injured” knee, spent the first few minutes hopping around on one leg as she was taunted by Flair. Flair then took control of the contest as she proceeded to go to work on Becky’s knee. As Flair seemed to have the match won when she locked in the Figure Four, Ronda Rousey sprinted to the ring and struck Becky Lynch. This action caused Flair to be disqualified awarding the match to Becky Lynch and punching her ticket to Wrestlemania.

Following the match, Elias rewarded the crowd with his THIRD performance of the evening and, as he was sure to allude to, it went uninterrupted. That is until Lacey Evans’ music hit and she walked to and from the ring. As Elias was distracted, he was stunned with an RKO Outta Nowhere! As Orton admired his work, A.J. Styles launched himself into the ring and dropped The Legend Killer with a Phenomenal Forearm. It appears that we are on course to witness Styles vs. Orton at The Showcase of the Immortals.

This match not only marked Roman Reigns first match in six months since he announced that he would need to undergo treatment for his Leukemia that returned, but also the “final ride” for The Shield. Roman rallied the troops for this final union in the ring because WWE, quite surprisingly unless it’s a work, has reiterated the reports that have circulated online that Dean Ambrose will not renew his contract. The match started a bit on the slow side to be honest, but business quickly picked up as the carnage spilled to the outside of the ring. The highlights included a Shield Bomb (triple power bomb) delivered on Drew McIntyre as he was unceremoniously put through the Spanish announce table. The second Shield Bomb was executed on Baron Corbin in the center of the ring after which Roman Reigns scored the pinfall. 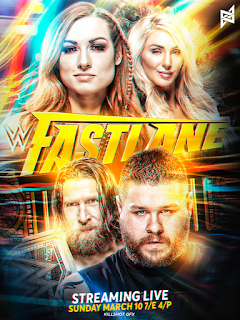