The Weigh-In: Your Home for Combat Sports · Bill Caplan Interview with Luis Cortes
No comments:

The Weigh-In: Your Home for Combat Sports · Sebastian Fundora Interview with Luis Cortes
No comments:

Carlos Ortiz, the Last of a Breed 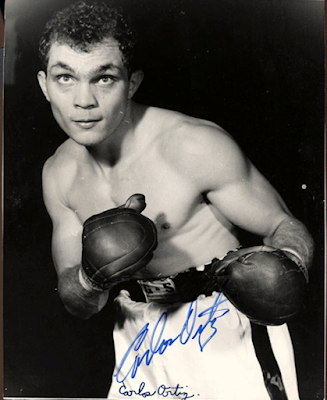 For me, the death of Carlos Ortiz on June 13, 2022, represents the end of an era. An era when many boxers trained with other boxers in remote training camps. Carlos Ortiz was the last in a long line of champions that trained at a boxing camp in the small, idyllic town of Chatham Township, New Jersey. It was a camp that was started by a woman, Madame Bey, in 1923, and continued by Ehsan Karadag after her death in 1942. There is no telling how many champions passed through this camp; however, we do know that there were no fewer than 14 heavyweight champions and 80 International Boxing Hall of Fame inductees that came to this camp from 1923 to 1969.
When Ortiz first came to the camp, he was following in the footsteps of a pantheon of great boxers. From the first to train here in 1923, middleweight world champion Johnny Wilson, to the last, Carlos Ortiz. Others in the forty-seven-year history that trained here were Gene Tunney, Max Schmeling, Mickey Walker, Henry Armstrong, Lou Ambers, Tony Canzoneri, Floyd Patterson (the last heavyweight champion to train here in 1959), and many other world champions. Other greats that had retired just came to the camp to watch their successors. Greats like Rocky Marciano, James J. Corbett, Jack Johnson, Jack Dempsey, Joe Louis, Benny Leonard, James Braddock, were among them. Along with the fighters, many great trainers, managers, and promoters accompanied them, like Cus D’Amato, Ray Arcel, Whitey Bimstein, Chris Dundee, Joe Jacobs, Mike Jacobs, Jimmy Jacobs (Mike Tyson’s co-manager), etc.
In 1966 and 1967, the last world champion came to use Ehsan’s camp as a base for his training. Like Freddie Welsh, who had brought boxing to Chatham Township in 1917, he held the world lightweight championship. His name was Carlos Ortiz, born in Ponce, Puerto Rico, on September 9, 1936. He came to mainland America in 1947. Ortiz had eyes that lit his face, even white teeth, tightly curling brown hair, and thick eyebrows dominating his tiny features. His face remained unmarked after eighteen years of fighting as an amateur and professional. 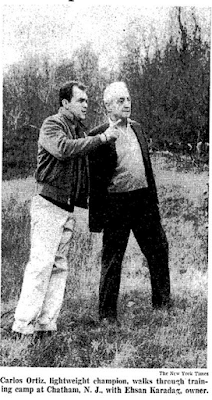 WWE Hell In A Cell emanated from the Allstate Arena in Chicago, Illinois and would have a lot to live up to after AEW put forth an incredible show in Las Vegas last weekend with Double Or Nothing. This evening’s card featured only two title bouts and was headlined by Cody Rhodes and Seth Rollins waging war inside the visceral Hell In A Cell, however, it was notable that many major names were not present on the card including, Roman Reigns, Drew McIntyre, Charlotte Flair, Ronda Rousey, and The Usos - to name a few.

Bianca Belair found herself in the crosshairs of not only the woman whose title she took at Wrestlemania, Becky Lynch, but also the returning Asuka. Belair was originally set to square of with the Empress of Tomorrow one on one until Lynch pinned Asuka recently on Monday Night RAW to insert herself into the bout. In a surprisingly fast-paced and entertaining opening contest, the closing moments saw Lynch execute the Manhandle Slam seemingly leaving her poised to win the title. Belair then reemerged from the arena floor and dragged Lynch from the ring stealing the pinfall on the stunned Asuka to retain her title.

Tonight offered a continuation in the ongoing rivalry between Lashley and Omos that began at Wrestlemania and was further ignited as MVP betrayed Lashley upon his return from injury.  In the closing moments of the contest, Cedric Alexander provided just enough of a distraction to allow Lashley to spear Omos leaving MVP alone with The Almighty who cinched in the Hurt Lock to earn the submission victory.

Since the night following Wrestlemania, the wrestler once know as Elias,  has been monopolizing his time with convincing Kevin Owens that he is Elias’ younger brother Ezekiel - even though it’s clearly the same wrestler with no beard, no guitar, a haircut, and different ring attire. Ezekiel showed some flashes of offense early but a cannonball delivered to a vulnerable Ezekiel followed by the Stunner was too much for him to overcome as Owens easily pinned him for the three count.

Winners: The Judgement Day via pinfall

This bout held several underlying plot lines heading into this evening. Edge and Styles have had their ongoing rivalry since prior to Wrestlemania, Morgan and Ripley were former tag team partners, and Styles and Balor are both Bullet Club alumni from their time in New Japan Pro Wrestling and Ring of Honor which brings us to the tag team affair tonight. In the final moments of the bout, Edge appeared to be in dire straits as Balor ascended to the top rope to attempt the Coup de Grace. Ripley then stood in his way thwarting the attempt and as Balor came back down to the canvas, he was greeted with a devastating spear from Edge to seal the victory for The Judgement Day.

The rivalry between Moss and Corbin, one time friends turned bitter enemies, that was sparked out of jealousy following Moss’ win in the Andre The Giant Battle Royal and Corbin’s loss on The Showcase of the Immortals, continued this evening in a No Holds Barred match. In what essentially evolved into a watered down hardcore match, Moss finally earned a measure of revenge on Corbin as he wrapped a steel chair around his head and dropped the steel ring stairs on him before covering Happy for the pinfall

The youngest United States Champion in history stood toe to toe with Chicago’s own Mustafa Ali with his championship gold on the line in a match that came to fruition on Monday night. Mr. McMahon had Adam Pearce establish the bout after Theory gave Ali a “title shot” following his match with Ciampa in the interest of fairness. Late in the match, Ali missed a 450 attempt that allowed Theory to capitalize and retain his title after he put Ali away with the A-Town Down.

Hell In A Cell Match

Seth Rollins obsession over his loss to Cody Rhodes at Wrestlemania has continued to linger while seemingly plunging him deeper into self-manifested madness. Tonight could be the final chapter in this rivalry as the two stepped into the ominous Hell In A Cell. Prior to the match, it was reported that Cody had sustained a torn pectoral muscle while training earlier in the week and needless to say, it was accurate. After Cody removed his ring jacket, the crowd was left in utter silence as his right pectoral and bicep were grotesquely black and blue. To add to the drama of this encounter, Rollins elected to don black ring attire with yellow polka dots - a jab at Cody’s father, “The American Dream” Dusty Rhodes. Give Cody Rhodes a lot of credit as he was clearly limited in his arsenal tonight yet still managed to put forth the best match of the evening with Seth Rollins. In the closing moments, Rhodes executed multiple Cross Rhodes before he put Rollins down with a sledgehammer shot to the head. 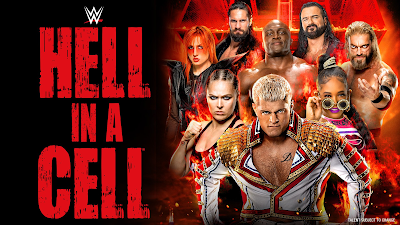