WWE returned to the birthplace of extreme, Philadelphia, PA, for Extreme Rules live from the Wells Fargo Center. While the Undisputed Universal Champion, Roman Reigns was noticeably absent from the card, the show was loaded with several “extreme” matches including two of the six contested for championship gold. One would have to wonder if the show would bend the rules of the PG rating with Vince McMahon no longer at the helm on a night where WWE claims to go extreme. Another glaring question for the evening was whether the “white rabbit” (presumed to be Bray Wyatt) would make his debut/return.

Winners: The Brawling Brutes via pinfall

The bitter feud that has continued to escalate since Walter and Sheamus battled for the Intercontinental Championship at Clash at the Castle last month, came to a head tonight. Both men rallied their factions together for a “Good Old Fashioned Donnybrook Match” which was essentially a free-for-all brawl. Before the chaos of this match ensued, it should be noted that The Brawling Brutes entrance was interrupted by a brief video featuring the enigmatic “white rabbit.” Following a hard-hitting brawl that exceeded 20 minutes, Gunther received a devastating shot with a shalalee at the hands of Sheamus that subsequently allowed him to seal the victory.

Ronda Rousey found herself in a position to try and regain her Smackdown Women’s Championship that she lost at Money In The Bank when Morgan cashed in her briefcase on Rousey after she was injured in her title defense. Rousey looked out of place in this match as soon as weapons were introduced and unfortunately Liv Morgan didn’t look much more comfortable as her most significant highlight was a well-executed senton from the top rope that put Rousey through a table. Moments after that thunderous blow, Morgan found herself tied up on the mat in the most unique submission hold I’ve seen her unleash that lead to Morgan losing consciousness.

Karrion Kross made his shocking return to RAW (following a very dismal and poorly booked first run on the main roster) just before Clash at the Castle. Upon his return, Kross immediately placed McIntyre in his crosshairs. The two combatants were bound together by a 13-foot leather strap in this bout with the winner to be declared by scoring a pinfall or submission. The closing moments of the match saw McIntyre seemingly poised for a potential victory as he sized up Kross for The Claymore. Scarlett intercepted McIntyre and sprayed him in the eyes with pepper spray leaving him vulnerable as he was blindsided with the Kross Hammer allowing Karrion Kross to seal the victory with a pinfall.

Bayley made her return at Summerslam with her new running mates Io Sky and Dakota Kai, collectively called Damage Ctrl, as they confronted Belair following her successful title defense over Becky Lynch. Fast forward to tonight where they meet head-to-head in a Ladder Match where the first competitor to scale the ladder and retrieve the title suspended above the ring would be the victor. Belair was able to overcome a spirited effort by the former champ and interference by Damage Ctrl as she hit the KOD on Bayley clearing a path for her to ascend to the top of the ladder and retrieve her title.

This bitter feud ignited after Edge was unceremoniously booted from the faction he created, Judgment Day, when he thought he was introducing Finn Balor as the newest member only to have him supplant him as leader. Tonight, this feud came to a head in an “I Quit” Match where one wins by making his opponent mutter the words, “I Quit.” Edge was seemingly moments from forcing Balor to quit as he had him in a crossface with the aid of a hockey stick until the rest of the Judgement Day came to his aid. The odds were then evened as Rey Mysterio and Beth Phoenix came to The Rated R Superstars aid. The Judgement Day was able to regain the advantage once again after disposing of Rey Mysterio and Ripley delivering a vicious blow with brass knuckles to the back of Beth Phoenix’s head. With Edge being held down, Ripley positioned Phoenix’s head on a chair for the con-chair-to. Edge was forced to say, “I Quit” and still watched as Ripley delivered the crushing chair shot to his wife’s head.

Following the match, The Miz was again confronted by the Flyer’s mascot Gritty backstage and was offered a t-shirt. This time The Miz attacked Gritty and as he stood over the mascot berating him, he was attacked from behind by Dexter Lumis who subsequently choked him out and walked away with Gritty.

These two men decided to take their personal rivalry into the Fight Pit, a doorless steel cage with shelves on top that would be lowered over the ring with the ropes removed. Additionally, a winner would only be crowned by pinfall or submission meaning escape would not be an option. Late in the contest, Riddle landed a senton from the top of the Fight Pit and moments later cinched in a triangle choke to solidify the victory.

As Riddle exited the arena, the lights faded to black as a creepy rendition of “He’s Got The Whole World In His Hands” echoed through the arena. After people dressed as characters from the Firefly Funhouse were illuminated around the arena, Bray Wyatt made his long-awaited debut/return to WWE to close the show. 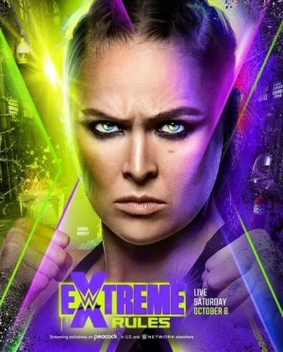 Check out the latest from Luis A. Cortes III on The Sweet Science:
Atlantic City Boxing Hall of Fame Returns plus Local Philly Fight News