Headlining the main event, Avery Sparrow, Philadelphia, dropped a very close eight round decision to William Foster III, New Haven, CT. The tides of momentum changed throughout this battle, due to Sparrow's ability to adapt.

Foster's four inch height advantage made it hard for the usually counter punching Sparrow,129.1 lbs., to score. Utilizing his natural physical assets, Foster, 128.7 lbs., pumped his left jab while moving forward and snaking in right hands. After three rounds, Foster seemed to be in full control and was able to slip Sparrow’s attempts at counterpunching. Unable to close the gap, Avery did not get frustrated. Instead, Sparrow implored a new fight style by moving his head and being aggressive to get inside. Once Sparrow found himself inside Foster’s wheel house, he was more effective landing overhand rights to the head and blows to the body. Several times, Foster found himself in a corner or back to the ropes and could do nothing but grab his foe.

Getting caught with punches moving inside, Sparrow did not relent and fought every second of the remainder of the contest, including very strong efforts in rounds six and seven when he snapped back Foster’s head with right hands.

During the final three minutes, Foster committed to staying away from the shorter Sparrow and moved non-stop. Darting in scoring shots and running away, Foster won the last round and the fight on all three judges' scorecards 77-75.

Sparrow had Foster figured out, but ran out of time. If a rematch was scheduled for ten rounds, this scribe would wager heavily on Sparrow.

Stepping into the ring for the first time since the start of the COVID pandemic, Jeremy Cuevas, Philadelphia, did not miss a beat. Showing zero effects of being laid off for two years, Cuevas knocked the tar out of Nicolas Pablo Demario, Buenos Aires, Argentina, over six rounds. Punctuating a solid performance, Cuevas, 144 lbs., dropped Demario,143 lbs., with a right to the chin in round five. All scorekeepers saw it 60-53 for Cuevas. Cuevas is now 14-1, 10 KOs. Demario's heads home with a record 16-7, 10 KOs.

Interestingly, Demario entered the ring to the theme of the movie The Godfather. In all my years around the sport, I have never heard that melody used by a boxer. Veteran cutman and mob historian, Joey Eye, also stated it was also a first for him.

The event was held at The Fillmore Theater. The Fillmore is a small venue that has a balcony and two bars serving booze ringside. Roughly just over six hundred spectators wet their beaks and enjoyed the night’s festivities. 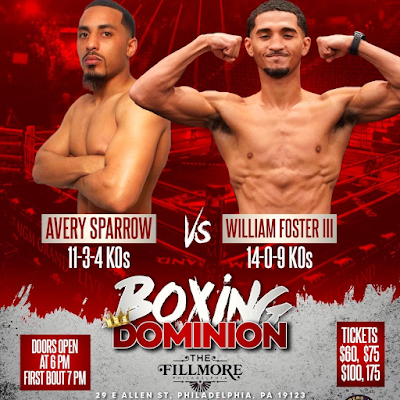 Video by Luis A. Cortes III
No comments:

Questionable scoring by the judges dampened Philadelphian Damon Allen’s comeback at the 2300 Arena last Saturday night (7/09). It was Allen’s first fight since the COVID pandemic struck; he had not been in the ring since October of 2019. Tough Oscar Barajas, Zamora, Mexico, fought hard but did not appear to earn the six-round decision.
Looking a bit rusty, Allen, 131.5 lbs., still came out fast and managed to stay on his toes and moved well while landing blows to Barajas' head during round one. Although Allen’s timing may have been off, this pattern continued and he clearly swept the first three stanzas.
Granted, the southpaw Barajas,136.2 lbs., pressed forward, fighting out of a half-crouch, and managed to score a few hard shots to the head and body during the first nine minutes.
However, matters took a different course in the fourth and fifth rounds when Barajas’ awkward punches began to find their mark. Barajas tattooed Allen with combinations to the chin and had him buzzed during round five.
Determined to win, Allen returned to life and stormed off his stool when the bell chimed to start the final session. Standing toe to toe both combatants unloaded bombs. It was give-and-take until the final gong, and Allen got the better of every exchange. The entire crowd of over nine hundred spectators were excited, and on their feet cheering the native Philadelphian.
Following the fight's conclusion, the Philly boxing fans were smiling, shaking hands, and high-fiving, believing Allen’s heart and big finish had secured the victory. So, there was a collective gasp when ring announcer “Discombobulating '' Jones read the official scores: 57-57 and 58-56 twice, giving Barajas a majority decision win.
This was the second straight win for Barajas against a Philadelphia prizefighter at the 2300 Arena. In February, Barajas upset Philly fan favorite Jerome Conquest in the very same ring. Barajas' mark rose to 6-8-1, 2 KOs. Allen lost for the second time and is now 16-2-1, 5 KOs.
Allen vs. Barajas was the co-feature to an eight-round main event that pitted featherweights Edward Vazquez, Fort Worth, TX, against Jose Argel, Carolina, PR in a scheduled eight-rounder. Neither Vazquez,128.8 lbs., or Argel 127.2 lbs., packed a punch, yet both adhered to a slugger's fighting style. This made for a pitty-pat war for all eight heats. Vazquez won by shutout, 80-72 on all three cards, and improved his respectable record of 12-1, 3 KOs. Argel dipped to 8-4, 2 KOs.
OTHER RESULTS
Isaiah Johnson, 141.6 lbs., Sicklerville, NJ., winner TKO1 (1:57) over Rondale Hubbert,145.7 lbs., Duluth, MN. Johnson: 5-0, 5 KOs. Hubbert 14-23-3, 8 KOs.
DeAundre Pettus, 160.5 lbs, Columbia, SC won by unanimous four-round decision over Chukka Willis, 163 lbs., Emporia, KS. All three judges scored 40-36. Pettus, 7-1, 3 KOs. Willis: 4-17, 2 KOs.
Famous Wilson, pro debut, 160.5 lbs., Deer Park, NY, won by unanimous decision versus Vincent Randall, 157.9 lbs., Valparaiso, IN. The scores were 40-36 twice and 39-37. Wilson: 1-0, Randall: 0-2.
Boimah Karmo, 152.7 lbs., Sharon Hill, PA, won a unanimous four-round nod against Daniel Jiles, 151 lbs., Philadelphia, by scores of 40-36 and 39-37 twice. Karmo: 3-0-1, Jiles: 0-2.
The night started with a battle of junior welterweight debutantes. Najeem Johns, 141 lbs., Philadelphia, cold cocked Darryl Chamberlain with the second punch of his pro career. The punch rocked Chamberlain to the core, and had him on queer street. John's follow up shot had Chamberlain falling face-first onto the ring apron. The fight ended after just 16 seconds into the action when referee Shawn Clark waved it off and the ring physician climbed through the ropes to provide medical care. Chamberlain was up on his feet one minute later and deemed in good physical condition. Johns: 1-0, 1 KO, Chamberlain: 0-1. 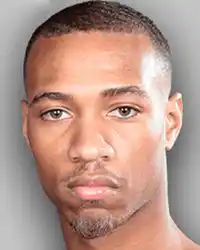 WWE made their return to Las Vegas this evening as Money In The Bank emanated from the MGM Grand Garden Arena. One could make the argument that this has evolved into one of the most significant pay per views of the year simply for the massive ramifications it can have on the world championship landscape. For those unfamiliar with the long running event, the respective winners of each Money In The Bank Ladder Match (who are crowned by retrieving the briefcase suspended above the ring) are awarded a world title shot at any point for one calendar year. One note of interest was that the event was originally scheduled to be held at Allegiant Stadium, home of the Raiders, however, sub-par ticket sales lead to the venue change. This evening’s loaded card featured six scheduled matches including two Money In The Bank Ladder Matches, as well as, three title bouts.

Becky Lynch vs. Asuka vs. Liv Morgan vs. Raquel Rodriguez vs. Lacey Evans vs. Shotzi vs. Alexa Bliss

The women’s match offered a well rounded field of competitors as it combined many established contenders and former champions, as well as, a few dark horse participants with the winner in position to potentially take a shot at the winner of the Ronda Rousey versus Natalya Neidhart title showdown also featured on the card. In the final moments of the match, we witnessed Becky Lynch seemingly moments from retrieving the briefcase as she ascended a ladder in the center of the ring, however, Liv Morgan came out of nowhere and climbed another ladder right next to her. Morgan was able to dispatch of Lynch and transitioned over to her ladder with a clear path to the briefcase. Morgan retrieved the briefcase and will now be able to cash in an opportunity at the Women’s Champion for one year.

After imposing his dominant strength upon Theory for much of the match, Lashley appeared in dire straits in the closing moments as Theory raked his eyes and executed a spear on The Almighty. Theory then hoisted Lashley up on his shoulders for the A-Town Down, however, Lashley used his speed and tact to slip out and promptly cinched in The Hurt Lock for the submission victory.

Belair was originally slated to defend her title against Rhea Ripley until an injury left her unable to compete. Carmella was subsequently able to insert herself in the match after she won a five-way match recently on RAW. By championship bout standards, this was a relative squash match as Belair had an answer to every ounce of offense Carmella attempted to mount. In the end, Belair retained her title after she put Carmella down with the KOD.

The Usos (c) vs. The Street Profits

The Usos put their historic 348 day title reign on the line this evening as they stood toe-to-toe with Montez Ford and Angelo Dawkins, The Street Profits, with the Undisputed Tag Team Championship on the line. The Usos frustrated The Street Profits for the majority of this match as they couldn’t put away the champs regardless of the level of risk associated with their offense. In the closing moments, Dawkins was disposed of into the timekeeper’s area leaving Ford to fall victim to some heavy tandem offense at the hands of The Usos. First, he took duel super kicks on the chin and then fell victim to the 1D as The Usos retained their titles. Controversy surfaced after the conclusion of the match as the replay showed that Ford’s shoulder was never down on the canvas as the referee commenced with his three count - there certainly will be more to come of this in the coming days.

Ronda Rousey returned to the ring tonight to defend her championship against another technical wrestler in Natalya. There were not many highlights in the match although the key moment came when Rousey was propelled from the ring and “tweaked” her knee on the landing. Rousey was still able to overcome this and a Sharpshooter attempt from Natalya to lock in an impressive armbar for the submission victory.

Following the match, Liv Morgan rushed to the ring to immediately cash in her Money In The Bank contract as Rousey was hobbled.

Rousey was able to immediately cinch in the ankle lock, however, Morgan escaped as she targeted Ronda’s knee. Morgan then rolled up Rousey for the pinfall to become the new Smackdown Women’s Champion.

Riddle vs. Seth Rollins vs. Omos w/ MVP vs. Madcap Moss vs. Sami Zayn vs. Sheamus vs. Drew McIntyre vs. Theory

After all seven competitors entered the ring, WWE executive Adam Pearce made his way out to announce there would be an eighth competitor and he proceeded to introduce Theory who lost the United States Championship earlier. In the closing moments, Riddle disposed of Rollins as he executed an RKO from the top of the ladder before scaling it once again. With the briefcase at his fingertips, Theory met Riddle at the top of the ladder. The two combatants proceeded to exchange blows as Riddle was knocked off of the ladder leaving Theory alone to retrieve the briefcase in possibly the worst Money In The Bank Ladder Match I’ve ever witnessed. 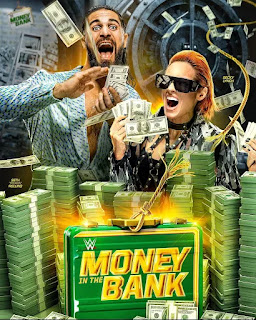