Saturday night fights at the opera house does not sound right. Especially when you are speaking about North Philly. That is exactly what happened when Hard Hitting Promotions displayed their wares at “The Met” on north Broad Street. Considered at one time to be in disrepair, the former Metropolitan Opera House has been restored down to the final detail of its original luster. Any one of the estimated 3,700 fans who entered the venue for the first time were awestruck by the forty five million dollar refurbishing.

Partners Manny Rivera and Will Ruiz of Hard Hitting Promotions staged the event with house promoter Live Nation. Trying to deliver a quality slate, Hard Hitting matched their charges Samuel Teah and Jeremy Cuevas in with tough opposition. Both of them lost eight round decisions by wide margins. Each of these forays were for Pennsylvania State Titles.

The Main Event saw Steve Ortiz, 134.2, drop Jeremy Cueves, 134.1, twice on his way to earning a unanimous eight round decision. This all Philly encounter pitted two young men with similar undefeated records. Ortiz showed more poise out finessing his hometown adversary. Throughout the bout, Cuevas utilized a in your face steam engine piston firing style. Why for his biggest fight did Cuevas come out imitating Mean Gene the Dance Machine was baffling. This approach diminished Cuevas' chances and Ortiz took full advantage of this by picking his spots, and settling down and teeing off.

Cuevas is now 11-1 (8 Ko’s), while Ortiz stays undefeated at 10-0 (3 Ko’s). By picking up this win, Ortiz's career continues to prosper as his stock rises. Cuevas did suffer a small setback and after a win or two he will return to hot prospect status.

Squaring off for the Pennsylvania Super Lightweight Championship, Samuel Teah, 139.1, was nearly shutout by Tre’Sean Wiggins,140, over eight heats. It looked like Teah may have underestimated Wiggins for he did not have a answer for anything thrown at him. Teah slides to 15-3 (7 Ko’s). Wiggins' record stands at 11-4-2 (6 Ko’s). Being a road warrior for most of his career, Wiggins has been on the wrong side of a couple bad decisions, with a couple of those losses and draws should be w’s.

When speaking of hot prospects out of the City of Brotherly Love, and there is a lot of them, Branden Pizarro's, 138.8, name is one of the last to be mentioned. As a young bad ass out of North Philly, Pizzaro may achieve more success than his contemporaries. Physically more mature than he was two years ago when he made his pro debut while still in high school, Pizarro exploded on poor Zack Ramsey of Springfield, Mass. Poor Ramsey, 140.1, took a sound thrashing before succumbing at 1:50 of round one.

Charismatic, exciting, with crunching power and fast hands, Pizarro is a real “Kid Blast” lifting his record to 14-1 (7 Ko’s). Getting to spend a weekend in Philadelphia, Ramsey goes home with some cash while he licks his wounds owning an 8-6 (4 Ko’s) mark.

Organically growing Hard Hitting Promotions, using their own hands, Rivera and Ruiz are now reaping a bountiful harvest with an estimated gross gate of almost a quarter million dollars that evening. Not only have these two young men helped maintain the Philly fight scene, they have made it thrive. Hard Hitting brings boxing back to The Met on April 26th. 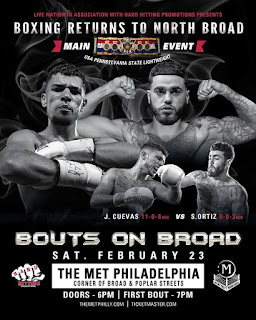