WWE Elimination Chamber emanated from The Toyota Center in Houston, TX this evening. The card featured six matches with five titles defended. Two of the bouts were contested in the awe-inspiring Elimination Chamber structure with one most notably to crown the first ever Women’s Tag Team Champions. On a personal note, I will say that I found this to be one of WWE’s most entertaining “non big four” pay-per-views in quite some time - could it be because they are starting to feel the pressure from AEW or is it simply because we are on the Road to Wrestlemania? Only time will tell. Nonetheless, I’ve always held a soft spot for the Elimination Chamber ever since I was in attendance at The World’s Most Famous Arena, Madison Square Garden, for it’s inception at the 2002 Survivor Series. This match saw the final two competitors come down to Triple H and Shawn Michaels in a classic contest. Without further ado, here are the results from this evening.

The first bout contested in the ominous Elimination Chamber this evening was to crown the first WWE Women’s Tag Team Champions. Deville and Rose kicked off the match against Banks and Bayley as the remaining four teams were locked in their respective pods. Jax and Tamina entered the ring shortly after the Iiconics scored the first pinfall of the bout on Naomi. The imposing tandem, who remind me of the female version of the Faces of Fear (Barbarian and Meng), quickly laid waste to all of the competitors except for the Iiconics who attempted to take shelter in a pod.

Their seemingly clever tactics didn’t last long as Jax and Tamina broke open the pod and flung them back and forth against the chamber wall like they were rag dolls. They then proceeded to simultaneously deliver Samoan drops to the Iiconics for the pinfall. The next elimination came after Tamina delivered the top rope splash made famous by her father Jimmy Snuka onto both members of the Riott Squad to secure another pinfall elimination. After Jax missed a spear on Bayley, she went through one of the pods in the corner leaving Tamina susceptible. This proved to be the turning point of the bout as the other two remaining teams proceeded to beat down Tamina.

Bayley capped off the assault as she delivered a nearly flawless elbow drop and all four women then piled on top of Tamina for the pinfall. The matched reached it’s conclusion as Sasha Banks locked Sonya Deville in the Bank Statement to claim the submission victory and solidified Bayley and herself in the annals of sports entertainment history as the first ever WWE Women’s Tag Team Champions.

After winning the titles from The Bar at the Royal Rumble, Shane-o-Mac and The Miz made their first title defense this evening against the new number one contenders, The Usos. It was quite evident from the get-go that the champs had put in some serious work as they functioned as a cohesive unit. Shane McMahon delivered a Coast to Coast and an elbow drop from the top turnbuckle to the announce table at ringside and The Miz connected with the Skullcrushing Finale but unfortunately it wasn’t enough. After The Miz executed his patented finisher, his pinfall attempt was reversed and in a shocking turn of events, the Usos are new tag team champions!

The odds were seemingly stacked against the leader of the Balor Club as he was forced to fight both Lashley and his hype man Lio Rush. Lashley had this match in hand and appeared to sizing up Balor for a spear when Rush reached over to tag himself in. This was the window of opportunity Balor needed as he ran roughshod over Rush and sealed his victory with the Coup de Grace to become the new Intercontinental Champion.

This was a statement match for Rousey as her Wrestlemania opponent (as it currently stands) Charlotte Flair sat at ringside. Riott attempted to play games with Rousey as she continued to duck out of the ring. When she finally did engage Rousey, Ronda hoisted her up for the Piper’s Pit and transitioned it into her signature armbar submission for the quick tap out.

As Flair and Rousey stood face to face in the ring after the match, “The Man” Becky Lynch made her way through the crowd on a pair of crutches and entered the ring. First, The Man obliterated Flair with one of her crutches leaving her in a pile of mutilated flesh. Then after Rousey took a crutch and appeared as if she was going to join the party and continue the assault on Charlotte, Becky took out The Baddest Woman on the Planet with her crutch as well. We’ll see if this will have any bearing on the Wrestlemania Main Event since Becky was removed by Mr. McMahon and subsequently suspended for 60 days earlier in the week. If I was a betting man, I’d say we’re about to have a triple threat match on our hands for Wrestlemania.

Strowman for the most part dominated Corbin up to the point where he drove him through a table with a running power slam. Just then Drew McIntyre and Bobby Lashley hit the ring and assaulted The Monster Among Men with a pair of steel chairs. The carnage finally reached it’s climax as the trio stacked two tables on top of each other, then with Lashley standing on a ring step positioned next to them, Corbin and McIntyre hoisted Strowman onto Lashley’s shoulders and the three power bombed him through the tables. At this point, Corbin was able to easily win the match via pinfall.

The first two combatants to participate in the visceral chamber were Daniel Bryan and “The Samoan Submission Machine” Samoa Joe. After these two exchanged several strikes and chops that left Daniel Bryan’s chest looking like ground beef, the next competitor to join the fray was Kofi Kingston who was coming off a taxing performance Tuesday night in a grueling gauntlet match.

Still with no eliminations, only three weary sports entertainers stood in the ring, A.J. Styles entered the match. As Samoa Joe and Kingston were exchanging blows in the center of the ring, The Phenomenal One propelled himself into the ring with a Phenomenal Forearm to the skull of Samoa Joe. Styles quickly pinned Joe for the first elimination of the match. Shortly after Joe’s elimination, Jeff Hardy entered the match and went right after Styles. After Hardy delivered an awe inspiring Swanton Bomb from the top of one of the pods onto Styles who was laid out across the top ropes, Bryan wasted no time delivering a running knee to Hardy that allowed him to steal a pinfall for the second elimination of the match.

The last man to be released from his temporary confinement was “The Viper” Randy Orton who earned this position with a victory in Tuesday night’s gauntlet match. As Styles attempted a Phenomenal Forearm from the top rope with Kingston in his sights, Orton executed an RKO Outta Nowhere to pin Styles. As Orton appeared to be in control of the match, Kingston hit Orton with the Trouble In Paradise to shockingly eliminate him.

The conclusion of the match saw Bryan and Kingston jockeying for position on top of one of the pods. It appeared that Kingston was in a prime spot to win his first WWE Heavyweight Championship as he kicked Bryan down into the ring. Kingston went for broke as he attempted a splash from the top of the pod but nobody was home as Bryan rolled out of the way. Bryan quickly recovered to hit the running knee to earn the pinfall victory and successfully retain his title. 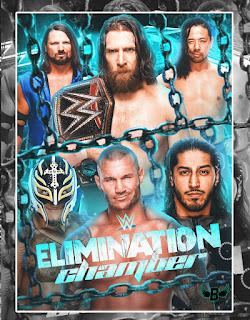