Golden Boy Promotions returns this Saturday evening to the intimate confines of the Fantasy Springs Casino in Indio, CA. The stacked card will feature a bevy of prospects, grizzled bar fighters, and two world title fights which should prove to make for an exciting night of pugilistic bliss.

The main event will pit Alberto Machado (21-0-0, 17 KOs) against Andrew Cancio (19-4-2, 14 KOs). Machado, appropriately nicknamed “El Explosivo” based on his impressive knockout prowess, will seek to defend his WBA Super Featherweight Title for the third time. Machado claimed the then vacant title with an eighth round KO of Jezzrel Corrales back in 2017, and should be fresh as he comes off his most recent defense back in October, a first round KO of Yuandale Evans.

Machado will be challenged by California native Andrew “El Chango” Cancio. Cancio last tasted defeat at the hands of Joseph Diaz by way of a ninth round TKO in 2016, as he attempted to earn the NABF Featherweight Title. Since that blemish and a year-long layoff in 2017, Cancio returned to victory road in 2018 as he defeated Aidar Sharibayev via tenth round TKO (to earn the then vacant WBA Inter-Continental Super Featherweight Title) and Dardan Zenunaj by unanimous decision. One should note that this will also be the first time in Cancio’s campaign that he will compete in a bout scheduled for 12 rounds whereas this will mark Machado’s fourth fight in a row set for 12.

In the co-feature, Rey Vargas (32-0-0, 22 KOs) will square off with Franklin Manzanilla (18-4-0, 17 KOs). The undefeated Vargas will be making the fourth defense of his WBC World Super Bantamweight Title in this 12 round contest. Vargas earned the then vacant title by a majority decision victory over Gavin McDonnell in 2017 and has since defended it successfully against the likes of Ronny Rios, Oscar Negrete, and Azat Hovhannisyan – all by unanimous decision.

Vargas will be opposed by Venezuelan native Franklin Manzanilla. Manzanilla enters this bout on the heels of two straight victories as he lasted tasted defeat by way of a split decision loss to Belmar Preciado in 2017. When one takes a more critical look at Manzanilla’s last two victories, it may lead you to scratch your head as you ponder how he found his way into a world title fight. Sure, he currently holds the WBC Silver Super Bantamweight Title – a title he won as the result of his opponent, Julio Ceja, retiring in round four last May. That victory was preceded by Manzanilla’s third round knockout of Francisco Herrera – a fighter who entered that bout with a record of 1-46-2…yes, you read that correctly, he had 46 losses and in case you were wondering, he’s now 1-49-2 with his one win coming by DQ. While Manzanilla has not exactly faced a who’s who of top contenders throughout his career, this is boxing and in the words of James Ellsworth, “Any man with two hands has a fighting chance.”

Tickets for this exciting card are still available at fantasyspringsresort.com and start at only $35. If you’re unable to be in attendance, you will still be able to catch all of the action on DAZN beginning at 7:30 PM ET/4:30 PM PT.

*Editor's Note: Stay tuned to The Weigh-In for Steve Ward's ringside report and recap from Fantasy Springs Casino in Indio! 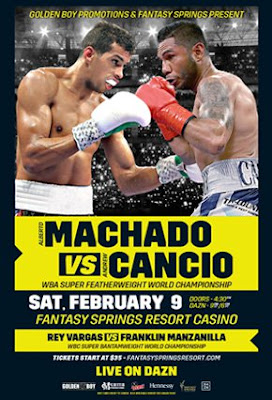