Iron Boy Promotions presented Iron Boy 49 from the storied Celebrity Theater in Phoenix, AZ this evening. The six fight card offered the capacity crowd in attendance a bevvy of young talent, local fan favorites, grizzled veterans, and a special treat not often witnessed on a professional card - two amateur fights that featured fighters from the Phoenix chapter of USA Boxing.

The co-main event featured Fidel Hernandez (19-5-1, 10 KOs) as he did battle with Ulises Jimenez (23-23-1, 15 KOs). This fight marked “OG’s” 2019 debut after a very busy 2018 which saw him enter the squared circle four times with a grab bag of decisions as he finished the year 2-1-1, all decided by the judges. Fidel last stepped in the ring just four months ago as he fought Andrew Hernandez (a man eight years his junior who’s gone toe-to-toe with stout talent such as Caleb Plant and Jesse Hart) to a 10 round majority draw. Hernandez’s opponent tonight was Ulises Jimenez, a fighter who’s engaged in combat with top tier fighters such as Roberto Garcia and Samuel Vargas, who at only age 35 entered his 48th professional fight.

The main event pitted newly signed Top Rank boxer Francisco De Vaca in his last fight for Iron Boy Promotions against Ernesto Guerrero, a veteran of 55 professional bouts. The 24-year old De Vaca, also known as Panchito El Centenario, made his first appearance of 2019 after a flawless 2018. De Vaca’s last fight emanated from the Gila River Arena back in August on the undercard of the Ray Beltran vs. Jose Pedraza ESPN clash (one I was lucky enough to have a ringside seat for) as he earned an impressive unanimous decision victory over Jesus Serrano.

Both of these young men took full advantage of the opportunity to participate on a professional card as they came out ready to put on a show. Rodriguez was able to work around the jab of Ruiz, who had a substantial reach advantage, to do some nice inside work as he landed some crisp uppercuts. Rounds two and three saw Rodriguez start to walk down Ruiz as he began to take control of the fight with some very effective feints that kept Ruiz on his heels in conjunction with some additional well placed uppercuts. The judges were all in accordance as Rodriguez took the bout via unanimous decision.

In the second, and final, amateur bout of the evening, both young men displayed unwavering tenacity as they stood toe-to-toe and gave 100% effort for three rounds. Girardot displayed excellent head movement and a solid left hook whereas Valerio, much like Mario Ruiz, was able to overcome his reach “disadvantage” to move inside and score what turned out to be significant points. I personally felt Girardot had done enough to win the fight by a narrow margin, however, two of the judges saw it differently as Valerio earned the split decision.

The first bout of the professional portion of the card pitted a pair of Phoenix natives against each other as the debuting Jose Castanon squared off with Eduardo Ayala. Round one saw Ayala come out and press the action as he landed some solid body shots, while Castanon looked primed to go but was a bit gun-shy which could have been attributed to first pro fight jitters. In round two, Castanon begin to establish an effective jab that was able to draw blood from the mouth of Ayala, however, Ayala answered with several vicious combos highlighted by some powerful body shots. Round three saw Ayala slow down a bit but Castanon was unable to capitalize as he still allowed himself to be walked down and thus opened himself up to some additional punishment and the development of a prominent mouse under his right eye. In the fourth and final round, Castanon came out reinvigorated and let his hands go while he continued to utilize an effective jab, however, it was too little too late for a four round contest. The judges viewed this bout unanimously as a clean sweep for Ayala.

Tim “The Toolman” Ruiz attempted to overwhelm Ochoa with a dose of reckless abandon in the opening round, however, Ochoa displayed great patience and landed a right hook to Ruiz’s ear that dropped him to his knees. Ochoa came out in round two and delivered much of the same as he continued his tactically sound onslaught. Ochoa’s well placed right hooks and straight rights bloodied the mouth of Ruiz, ejecting his mouthpiece in the process. In round three, just seconds after Ochoa reintroduced Ruiz to the canvas, his continued assault led Ruiz to take a knee leading to an impressive victory for the Mesa, AZ native.

In the co-main event of the evening, Fidel “OG” Hernandez immediately brought the hometown crowd to their feet as he made his way to the ring donning his sunglasses to the classic War song “Lowrider.” From the opening bell, Jimenez did not exude the body language of a man that wanted any part of this fight as “OG” Hernandez continued to walk him down and cut off the ring leaving him on his heels. Round two delivered much of the same as Jimenez continued to play keep away, a tactic that almost backfired as he caught a right hook on the chin that he was lucky to absorb. Jimenez entered round three like he was a different fighter as he attempted to mount some offense, unfortunately for him, it exposed a window of opportunity for Hernandez to walk him into the corner. OG was able to brutalize Jimenez with body shots that drove Jimenez to his knees leading the referee to call a stop to the action.

Round one was an extended feeling out process for the two pugilists as De Vaca walked down Guerrero repeatedly and stayed busy enough to seemingly have taken the round. Round two saw an uptick in the action as De Vaca quickly landed a stiff, straight right that propelled Guerrero into the ropes with such velocity that I thought he was going to land in the judge at ringside’s lap. Rounds three through eight saw Guerrero enter survival mode as he seemed more interested in wrapping up De Vaca than attempting to inflict any kind of punishment. De Vaca on the other hand demonstrated a proficient jab and when he was able to engage Guerrero, he landed body shots with sniper-like precision. The fight overall was rather frustrating for the fans in attendance as De Vaca literally begged Guerrero to engage him to little avail. In the end, it was no shocker that all three judges agreed that De Vaca pitched a shutout as he was awarded the unanimous decision. 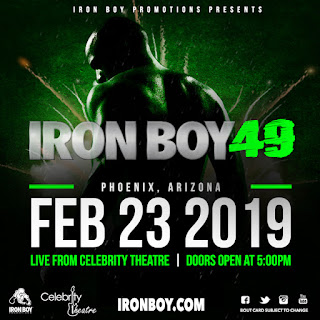