Finally! The People’s Red Head has Come Back to the Weigh-In!

UFC Fight Night 143 came and went faster some of my buddies marriages. Dillashaw and Cejudo was no exception to the coming and going. This was scheduled as the main event, but ended 32 seconds into the first round. Many expert analysts among the sport are calling the stoppage premature, and The Weigh-In also feels the stoppage came a bit early.

When questioned about the stoppage, The Weigh-In’s own Matt Ward was quoted as saying, “Fuck You!” This is just a phrase he randomly leaves on my voicemail so do not read too much into it.

Luis Cortes was unfortunately not available for comment on the matter.

Steve Ward was not quoted but did provide lengthy commentary on new tracksuit trends for 2019, and did attempt to lube me up before undergoing an interview with me.

Entering the first round, Dillashaw was clipped as Cejudo came out aggressive and ready. Dillashaw was clearly dazed and wobbled, but there was nothing upon review that would lead anyone to believe he was knocked out or incapable of defending himself. Again, I am not one to ever argue against protecting the fighters but Dillashaw was not given a fair chance to recover. I would have liked to have seen what would have happened in the following 30 seconds, but we will never know.

After the bout, UFC President, Dana White stated he too felt the stoppage was early. Following the fight, Big John McCarthy told MMA Mania he would not have stopped the fight at the point it was stopped.

However, no matter what anyone feels, what is done is done. The results of this match leave a real sour taste in the mouth of many (insert joke here). Cejudo is coming off a preposterous win over Dimetrius Johnson. I say preposterous because Dimetrius was robbed by poor judging. Furthermore, I wish MMA would really take a page from the book of boxing in that, a champion needs to be convincingly dethroned to lose their belt.

Dillashaw goes through a grueling weight cut to fight Cejudo at 125lbs. All of the scrutiny regarding Dillashaw’s chin due to the weight cut should be easily dismissed. Cejudo’s onslaught of punches that dazed Dillashaw did not prove to be due to the weight cut. In fact, in my eyes Dillashaw looked better than ever and seemed to be going for a takedown, but was stopped immediately as Cejudo continued to swing away. Dillashaw later went on Joe Rogan’s podcast and admitted to being caught by good shots, but angered by the stoppage. Dillashaw should be angered. Has the man not proven himself at this point? Dillashaw put his body through an extreme cut in order to put 125 on the map and this result is how he gets rewarded. I think Dillashaw should be granted an immediate rematch.

Gregor Gillespie defeated Yancy Medeiros by knockout in the second round

Paige VanZant defeated Rachel Ostovich by submission in the second round

Glover Teixeira defeated Karl Roberson by submission in round one

Donald “Cowboy” Cerrone defeated Alexander Hernandez by knockout in the second round  (WAY TO GO COWBOY!) 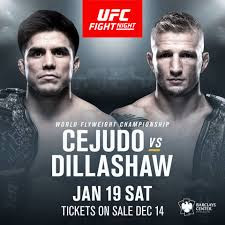