Hovhannisyan, trained by the legendary Freddie Roach, came out on the offensive in round one and clearly controlled the action with the exception of a low blow that dropped Sonsona to his knees. In round four, Sonsona continued to display a disinterest in the fight when he attempted to sell a low blow but the referee called his bluff and pointed out that he was hit on the hip. This appeared to fluster Hovhannisyan as he came out and again struck low, this time having a point deducted by the referee. Freddie Roach must have lit a fire under Hovhannisyan because he “turned the page” like Bob Seger in round five and appeared like a different fighter. Hovhannisyan proceeded to tee off on Sonsona with sniper-like precision as he brutalized him with an onslaught of body shots. Sonsona was dropped to his knees twice in the round as a result of these body shots with the second time being unable to answer the referees count.

To be quite honest, the first three rounds were rather uneventful as the two fighters embarked on an extended feeling out process. Rounds four and five saw an uptick in the action as Johnson began to effectively land his uppercut when Castaneda would allow him to work inside, however, Castaneda continued to display a solid chin and was able to capitalize on Johnson opening himself up for some well placed right hooks. Round six saw both fighters attempt to establish their inside game to such an extent that their foreheads may as well have been glued together, however, neither was able to gain an upper hand as they alternated the roles of puncher and counterpuncher with each other throughout. Castaneda entered the eighth and final round like a man who wanted to win this fight. Castaneda immediately walked Johnson into his own corner with a number of well placed combos and maintained his momentum for the majority of the round. It could be argued that Castaneda had done enough to win this fight, however, I believe the margin was narrow enough that this wasn’t the worst decision in the world – just not one that fight fans necessarily wanted.

The DAZN portion of the card hit the ground running as Oscar Duarte battled Adrian Estrella for the vacant WBC Continental Americas Lightweight Title! The first two rounds were not something one would want to view if they were drowsy, or looking for something to watch at 2 AM, or on antihistamines (you get the point) because there was not much of anything going on but one could argue that Estrella edged Duarte with the few punches he landed. Duarte’s corner must have told him that he needed to be more active prior to round three as he came out with new vigor and proceeded to walk down Estrella and push the action. Duarte’s continued surge in the middle rounds saw him open up Estrella over his right eye in round five. This created a crimson target for Duarte as the fight progressed that he attempted to make a focal point of his attack. Estrella went into survival mode for the final three rounds as he sporadically needed to wipe the blood from his eye and unfortunately didn’t mount much offense. Apparently the judges were watching a MUCH different fight as Estrella took the split decision for the victory and was showered with boos as he exited the ring.

The first two rounds commenced at a rather lethargic pace which could have been attributed to the pugilists acclimating to the fact that JoJo Diaz is a southpaw. The narrative changed in round three as Diaz appeared to finally measure up Huerta as he successfully landed several combos without much reciprocation. There was much of the same in round five where Diaz continued to punish Huerta as his punches seemed to begin landing with an added intensity that garnered a rousing ovation from the crowd. Without much of a response from Huerta, it appeared the referee may have told him to show something when he spoke to him in his corner prior to round six. The final four rounds saw JoJo take his foot off the gas just a bit but he still stayed busy enough to maintain control of the fight – of course allowing an opponent to stay in a fight is always dangerous when leaving your fate in the hands of the judges. Luckily everyone watched the same fight as all three judges awarded the bout to JoJo Diaz with identical scorecards.

After Vargas showed great poise in round one, Manzanilla came out in round two and stunned Vargas with a left hook that dropped him to the canvas. Manzanilla came on like a piranha in blood soaked water but Vargas had the fortitude to survive the round. Vargas managed to persevere through the remainder of the bout as he dealt with a steady flow of blood protruding from above his right eye as a result of an accidental headbutt in the middle rounds in addition to the antics of Manzanilla that resulted in the deduction of two points. Vargas essentially did just enough to frustrate Manzanilla but not enough to delight the crowd as the most captivating aspect of the final seven rounds was the Tecate ring girl. Nonetheless, Rey Vargas dominated Franklin Manzanilla, despite being dropped once, to retain his title.

Machado wasted no time in round one living up to his nickname “Xplosivo” as he dropped Cancio to the canvas with a well placed left uppercut. Cancio, the pride of nearby Blythe, CA, recovered in round two as he was able to neutralize Machado’s reach advantage to do some solid work inside and arguably take the round. Round three saw much of the same as Cancio fed off of the energy of the two or three rows of his boisterous supporters sitting near ringside leaving Machado on defense for much of the round. The unthinkable occurred in round four as Cancio quickly introduced Machado to the canvas two times in a row before he eventually overwhelmed him to the point where he dropped to his knee and the referee intervened to stop the fight. Your winner and new WBA Super Featherweight Champ, Andrew Cancio! 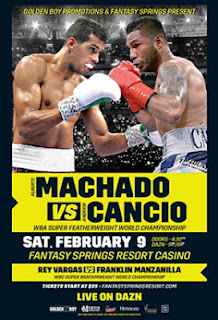