In an interesting scheduling change last month, there was no Takeover event the night before last month’s Royal Rumble but instead a Worlds Collide show that pit NXT and NXT UK against each other. With WWE making another cash-grab trek to Saudi Arabia in a couple weeks for their only RAW/Smackdown pay-per-view in February, the Superstars of NXT took center stage in a rare Sunday extravaganza. The six bout card featured the defense of all four NXT titles, and was headlined by Tomasso Ciampa’s stab at redemption as he battled Adam Cole for the NXT Championsip - a title he never lost.

Takeover got off to an electric start as two of the most agile heavyweights in the industry renewed their rivalry in a war. Dijakovic wasted no time delivering a move worthy of a “Mamma Mia” chant as he delivered a top rope moonsault to Lee who was seated in a chair positioned between the announce tables. Dijakovic appeared poised to earn his first NXT title after executing another spectacular move in the form of a top rope Spanish Fly, however, his back gave out in an attempt to subsequently hoist up Lee which opened the window for the champion to land the Big Bang and retain his title.

Close friends became bitter enemies at NXT War Games when Dakota Kai viciously attacked Tegan Nox preventing her from participating in the match. The bitter rivalry came to a head this evening as the two battled in a Street Fight. Dakota Kai wasted no time bringing the fight to Nox as she launched an ambush while Nox made her entrance to the ring. What was a fairly solid match ended up being ruined by a mishap in the end. Raquel Gonzalez made her way to ringside as Kai was laid out on a table thwarting Nox’s attempt to put her away. Gonzalez first hung Nox up on the rope and pushed Kai off the table. Gonzalez then scaled the ropes, grabbed Nox by the throat, and propelled her toward the table - unfortunately the table didn’t break. This allowed Kai to seal the victory and apparently earn a new cohort in the process.

After viciously attacking Gargano and putting him on the shelf, Balor made their feud personal. Gargano responded with a vow to use a victory over him to solidify his NXT legacy.  What began as a slow-paced bout, finished in a blaze of glory. Shortly after the fight had spilled to the outside of the ring, Finn sealed the deal with a gut-busting Coup de Grace followed by the 1916 DDT to put an exclamation point on an impressive victory.

After an impressive showing in this year’s Women’s Royal Rumble match, Belair earned a shot for the title as she won a #1 contender’s battle royal on a recent installment of NXT TV. While Belair has made quite the name for herself since her debut, it has seemed inevitable that Ripley will defend her title against Charlotte Flair at Wrestlemania - Flair only waiting to accept the challenge until after Takeover. Belair certainly pulled out all of the stops in arguably her best performance to date, however, it wasn’t enough as Ripley put an abrupt end to a very entertaining contest as she executed the Riptide for the pinfall.

Following the match, Ripley’s celebration came to a crashing halt as Charlotte Flair emerged from the crowd and flattened the champion in the ring. Flair then requested a mic and told Ripley she would see her at Wrestlemania!

Following their rather surprising chemistry and subsequent victory in the 2020 Dusty Rhodes Tag Team Classic, the Broserweights found themselves with a title opportunity this evening at Takeover. It appeared that a lack of experience as a team would bring about the demise of Dunne and Riddle in the closing moments after Dunne received an inadvertent spear, however, they overcame the superior tag team prowess of the Undisputed Era to win the NXT Tag Team Championships with an overwhelming flurry of tandem offense.

Adam Cole’s 260 day title reign was put on the line this evening as Tommaso Ciampa sought to regain the title he was forced to relinquish prior to his neck surgery. This bout was an absolutely visceral affair as both competitors left nothing on the table with the greatest prize in NXT at stake. Ciampa withstood a Panama Sunrise (Cole’s version of the Canadian Destroyer) at ringside to answer with Willow’s Bell and the Fairytale Ending but it wasn’t enough as Cole kicked out.

Cole’s Undisputed Era cohorts then made their way to ringside in an attempt to implement the number’s game, however, Ciampa briefly disposed of them with a vaulting corkscrew over the top rope. As if things couldn’t get more intriguing, the referee was then knocked out (of course). In what seemed to be a modest evening of the odds, Johnny Gargano arrived at ringside and grabbed the title belt. As Ciampa went to the ropes, Gargano struck him in the face with the belt all while wearing a DIY shirt in a shocking turn of events. This allowed Cole his opportunity to cover Ciampa for the victory as the referee conveniently reemerged to count the 1-2-3. 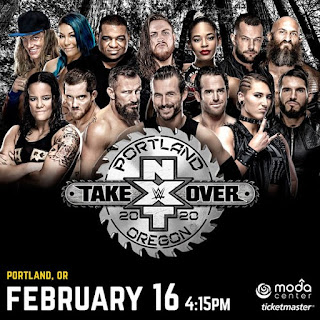