The events leading up to the WBC World Featherweight Champion bout between Gary Russell Jr. and Tugstogt Nyambayar at the PPL Center in Allentown, PA have been what some may call the "calm before the storm." On one side of the table, a flamboyant, energetic champion, and on the other side, a man of few words, the hungry challenger who prefers letting his hands do the talking.

Nyambayar is a boxer with a young but impressive record of 11 victories, with 9 of those wins inside the distance. Earning two silver medals in both the 2009 Championship Games and the 2012 London Olympics. These feats are not to be overlooked, as the champion Russel Jr.,  knows not to look past his opposition.

"The Mongolian people are warriors." "I won't look past Nyambayar."

Though the Champion has stated he will not look ahead of his challenge on February 8th, he has still emphasized his will to face bigger names in the sport.

"I want to fight Gervonta Tank Davis, Leo Santa Cruz, all those guys"

Russell Jr. will make his first title defense this year, having been away from the ring since May 2019, while Nyambayar will be shaking more of the rust off from his last bout in January 2019.

Undercard matchups taking place before the Showtime main event will display a list of popular prospects who are aiming to make their presence known as they continue climb up the rankings.

Premier Boxing Champions on Showtime will air at 9pm EST/ 6PM PT, while the doors open at the PPL Center at 5PM EST. 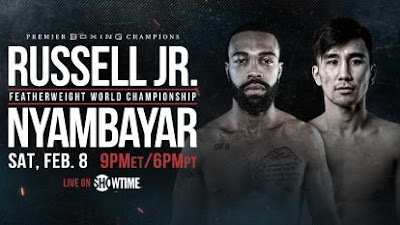