Miami Beach has palm trees, coconuts, Cuban sandwiches and ladies with inflated rear ends enveloping their thongs. Miami was hosting Super Bowl 54 and Miami Beach attracted the rich and famous. Driving by in a glaring white Bentley, Joe Pesce could barely see over the steering wheel. Enjoying the warm weather, Mark Cuban jogged down Collins Ave. High-end ticket scalpers only get to deal this week. For these ticket hawkers, the score on the big game only comes once a year and nothing compares except for the NCAA Final Four, World Series, NBA Championship and a Heavyweight Championship of the World fight.

Hoards of harlots arrived into town peddling flesh, whisking their Johns into nondescript dives on Collins Ave. You see Collins Ave. is off the strip and its beauty lies in the Art Deco architecture. Ocean Ave. aka The Strip is one block over and runs along the beach and restaurants that blare JLo, Rihanna, Beyonce and of course salsa music out onto their canopied decks filled with customers who have Margaritas and rum filled drinks. High-end shops that sell Gucci, Prada, Polo and other glitzy brands squeeze in between, but the action and fun lies on Collins Ave. Maxine's Bistro & Bar serves drinks and food all day and night. During this week, in the wee hours of the morning you can always find the boxing world's hardcore revelers strolling in for a drink and one last bite to eat. Matchroom Boxing USA's CEO Eddie Hearn chose this environment to promote a top notch night of fights the Thursday prior to Super Bowl Sunday.

For Eddie Hearn, what is referred to as football in his native England does not resemble the game by the same name in America. As a matter of fact, what Americans call soccer is the United Kingdom's football. With this knowledge in hand, Hearn decided to promote a night of championship battles and a side show act featuring two YouTubers with huge followings.

The venue, the Meridian at Island Gardens, was a steel makeshift building that was going to host concerts the following two nights, with Lady GaGa headlining Saturday night. On Sunday, pre- and post-Super Bowl parties were scheduled. Nicely done inside and out with bars and food stands under the roof and several entertainment booths outside, the building held five thousand seats and three thousand five hundred were filled in for the fights. By the following Wednesday, the Meridian Arena will be dismantled and carted away, leaving memories and an empty lot.

Two world championships changed hands. Trying to successfully defend his IBF Super Featherweight Belt for the fifth time, Tevin Farmer of Philadelphia, PA dropped a twelve round unanimous decision to Jo Jo Diaz of Downey, California. Diaz, the former WBA World Featherweight title holder, entered the ring with blonde locks and a piece of his left eyebrow shaved. He got on a plane back home with a record of 31-1 with 15 ko’s. This was Farmer's first loss in eight years as his record drops to 30-5-1 with 6 ko’s.

Entering the ring unified WBA and IBF World Super Bantamweight king, Danny Roman, Los Angeles Calif., was an unusual +250 underdog against Murodjon Akhmadaliev of Namangan, Uzbekistan. A give and take battle that could have went either way, Akhmadaliev won a twelve round split decision by scores of 115-113 twice and the other judge seeing it 115-113 for Roman. A rematch will be welcomed by all those who watched the contest. Roman is 27-3-1 with 10 ko’s. The new champ Akhmadaliev stays undefeated at 8-0 with 6 ko’s.

Only WBO World Middleweight Champion Demetrius Andrade of Providence RI, entered and left the ring with his belt around his waist. Only seconds after the opening bell chimed, southpaw Andrade had challenger Luke Keeler of Dublin, Ireland, eating resin dust from a straight left hand to the chin. From that point on, Keeler put forth a game effort until he was stopped in round ten. Keeler returns to the Emerald Isle 17-3-1 with 5 ko’s. Two weight division title holder Andrade remains undefeated at 29-0 with 18 ko’s.

Matchroom Boxing USA's next stop on its roadshow is Frisco, Texas on February 29, when Mikey Garcia takes on Jessie Vargas. 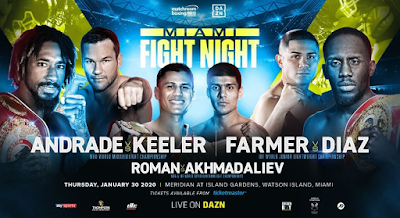