ALL ELITE WRESTLING: ALL OUT RECAP

This evening marked another landmark event for the upstart All Elite Wrestling. They made their return to Chicago again with ALL OUT just one year after the highly successful ALL IN that came to fruition on a bet with writer Dave Meltzer. The rumors and hype swirling around this event have been at a fever pitch for weeks, if not months. Questions such as would we witness the debut of CM Punk in his hometown or some other shocker? Would Chris Jericho or Hangman Page be crowned the first ever AEW champion? Aside from these factors, the card was also supposed to feature Jon Moxley (formerly known as Dean Ambrose) squaring off with Kenny Omega, however, a staph infection sidelined Moxley. AEW did find a more than suitable replacement with PAC (better known as Neville from his WWE days) to maintain a more than formidable card that was headlined by Jericho vs. Page to decide the first ever AEW World Champion.

This was an absolutely phenomenal bout to open the show. The high-flying, frenetic action finally came to a close as Kazarian hoisted up BOTH Stunt and Perry into a piledriver starting position as “The Fallen Angel” Christopher Daniels executed the Best Moonsault Ever to complete the tandem piledriver for the pinfall.

After Jon Moxley had to back out of this contest with a staph infection, PAC stepped up to answer the challenge. This match was an instant classic. These men put on a well balanced display of strong-style and high flying maneuvers as they went toe to toe with reckless abandon. This bout came to a close as Omega attempted to execute the One Winged Angel, however, PAC adjusted himself so that he was up in a fireman’s carry position and proceeded to cinch in The Brutalizer for the shocking submission victory.

Essentially this match was a hardcore match with several cracker barrels at ringside (can you say sponsorship?). Just moments into the action it became apparent that this was not any hardcore match, but pure unadulterated violence. There were tacks, staple guns, tables, chairs, and of course cracker barrels - all used with utter disregard for anyone‘s well being. This match finally concluded as Jimmy Havoc put the pride of Asbury Park, Joey Janela, through a barrel with the The Acid Rainmaker.

This match pit two teams that could not have been any more different in demeanor against each other with a first round bye in the upcoming tag team title tournament at stake. The Dark Order definitely would not pass for PG television as the roughly 250 lb Evil Uno donning a leather mask came to the ring with 8 more leather masked man appropriately donned The Creepers. This tandem took on The Best Friends who, well, their gimmick is that they are best friends. This match reached it’s conclusion as The Dark Order landed The Fatality on Trent Barreta for the pinfall. After the match, The Creepers were carrying Barreta away as the arena went dark and when they illuminated the arena again, Orange Cassidy stood in the center of the ring, hands in his pockets. Without ever removing his hands from his pockets, Cassidy vaulted over the top rope and took out all of The Creepers saving Barreta from whatever The Dark Order had planned for him.

This match carried great weight with it as it was sanctioned to determine who will face Nyla Rose, the winner of the Casino Battle Royale, to be crowned the first AEW Women’s Champion. This was probably the only match of the evening where the crowd was semi-uninspired and it wasn’t for a lack of action but rather because nobody knew who they were. Riho finally secured the pinfall in this one after a backslide into a rollup pinfall.

This match pitted “The American Nightmare” Cody and Shawn Spears (formerly The Perfect 10 Tye Dillinger) against each other in a personal affair. Spears was backed by Dusty Rhodes longtime rival Tully Blanchard while Cody had MJF in his corner. After repeated interference by Blanchard, he proceeded to lay waste to MJF after Spears aided him in getting the upper hand. This didn’t last long, however, as Arn Anderson made his way to the ring and dropped Spears with a vicious spine buster. This allowed Cody the window of opportunity he needed as he landed Cross Rhodes on Spears to secure the victory.

Words would not do justice to the carnage that ensued in this contest. Saying these teams put their bodies on the line would be an understatement. When the dust settled, the Lucha Bros stood atop the ladder and retrieved the tag team titles. After the match, two masked men rushed the ring and laid waste to both teams. With both teams dismantled, they removed their masks to the shock of the crowd as it was Santana and Oritz - better known as the latest incarnation of LAX in Impact Wrestling.

Several compelling storylines surrounded this match. This match was set to crown the first AEW World Champion, it pitted 27 year old Hangman Page against the grizzled veteran Chris Jericho who started wrestling two years before Page was born, and it featured the first ever female referee for the main event of a pro wrestling pay per view between two men. Jericho couldn’t put Page away with the Codebreaker or the Walls of Jericho but Page couldn’t stop him either with the Buckshot Lariat or The Deadeye. In the closing moments, a bloodied Jericho seemed like he was moments from suffering a devastating defeat when he countered another Buckshot Lariat attempt by Page with the Judas Effect for the 1-2-3.

In closing, I will say that this may have been the most exciting pay per view from start to finish that I’ve seen in quite a while and WWE should be on notice come October 2nd when AEW debuts their weekly show on TNT. 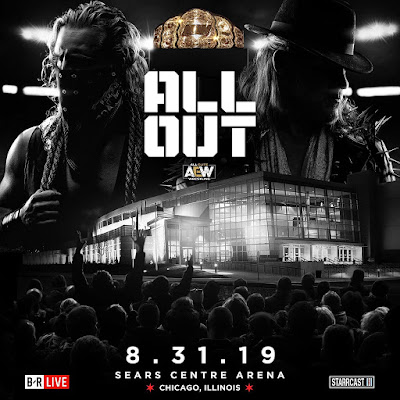