Avery Sparrow: Underdog – No VADA Testing, Par for the Course


Avery Sparrow (10-1) (3 KO’s) goes into his fight this Saturday night against Ryan Garcia (18-0) (15 KO’s) (DAZN 7 P.M. ET) in a familiar position, as the underdog.  It’s a position that Sparrow has not only come to expect to be in, but one that he relishes.  One thing that most boxing observers fail to realize about Sparrow and his career is that Sparrow, while being dubbed the underdog or “B side” of his fights thus far, simply does not think of himself as the underdog.  In fact, every time he has taken to the ring as a professional, he has the confidence that his abilities and experience put him on par with any fighter in the world in the super-featherweight and lightweight divisions.  With his dominate victory over one-time prospect Jose Lopez in 2017 in front of a national audience on ESPN, and his recent victory over long time contender (and fellow Philadelphian) Hank Lundy in March, one would be hard pressed to argue that Sparrow shouldn’t feel that he is often over looked by boxing observers when they mention the top talent in his weight classes.

Sparrow takes it in stride while dedicating his life to his career, which he feels is in a perfect position to once again prove to the world that he is indeed an elite fighter.  A natural super-featherweight, Sparrow was unable to secure any meaningful fights in the division and instead opted to fight Lundy at lightweight.  “It’s a little frustrating when you can’t get any fights at your natural weight and you have to move up,” stated Sparrow.  “Being that I’m from Philadelphia, I didn’t get any breaks coming out of the amateurs, and I’m built Peltz tough, having to fight tough opposition its fulfilling that I know I had nothing handed to me and know that the hard work is paying off.”

On Saturday night when Sparrow climbs into the ring to face Garcia, yet another lightweight, it’s clear that the fighter most of the boxing world will be tuning in to see will be Garcia.  Since turning professional in 2016, the twenty-one-year-old Garcia has built a massive following through his various social media platforms.  It also helps that Garcia is promoted by Golden Boy Promotions, which has set their young talent on a course to become more than just a boxing sensation.  Garcia has matinee idol looks that leads one to believe that a cross over into mainstream popular culture is possible.  Sparrow views things a bit differently.

“We all know the Golden Boy system; the first fourteen fights are tailor made for their fighter to win.  He was supposed to win those fights,” stated Sparrow.  “Coming from the Philadelphia system and the way we both had to deal with our amateur careers is a difference too.  When I was in the amateurs, we had to fight everyone in the city, then the regionals, then the Mid-Atlantic, and then you made it to the nationals.  Now you can just pay to get into the nationals and fight.  They say oh Garcia beat fighters from all over California, but I’ve been around the world.  I fought in the Junior Olympics and national tournaments.  So, this kid [Garcia] hasn’t even faced that type of opposition.  He was playing baseball when I was fighting in these big tournaments.  I had to qualify for those tournaments, I didn’t just get to walk on.  Also, in the professional fights, I’m always coming in against tough opposition and not easy fights.  I believe that separates me from Ryan Garcia.”

Much has been made of the union between Garcia and Eddie “Chepo” Reynoso the lifelong trainer of boxing’s current big star Saul “Canelo” Alvarez.  So far, it’s a union that has faired well for Garcia and has many in the sport believing that Garcia is constantly getting better, both as a professional athlete and as a fighter.  When the move from his father being the head trainer was made and Garcia was inserted into the world of Reynoso, many felt it was the type of move that would prepare Garcia for the moment when he would have to step up the level of his opposition.  That moment for him has arrived and it will take place against Sparrow on Saturday night.  “Look Canelo [Saul Alvarez] has like six brothers that are all fighters they train too.  His brother just got starched the other night.  Canelo is a diamond in the rough.  He trained with them his whole life since he was like ten years old.  Their system is embedded in him.  If you know anything about boxing, once you get hit and are in the trenches and get hurt.  Through muscle memory you go back to the fundamentals and everything you were taught, and those fundamentals were taught to him by his father.”

As for Sparrow, his training is done at TKO Fitness, a gym which over the past few years has gained a reputation for being the home of not only top contenders but also world champions.  Current IBF super featherweight champion Tevin Farmer and former WBA champion Jason Sosa ply their trade inside of the walls of TKO Fitness.  Sparrow is currently trained by former top American amateur Rashiem Jefferson, whose professional career was cut short due to an unfortunate motorcycle accident.  Sparrow’s training has been spent working with plenty of the world class fighters that call that gym home.

“I feel so strong right now.  I was off for a year when I fought Hank Lundy.  Only had two and a half months of training for that fight, after that long layoff.  My timing and my power are all there.  Now that my body is always active and I’m sharp from being in the gym, I’m ready both mentally and physically,” stated Sparrow.

An intriguing curve ball was thrown towards team Sparrow when the negotiations were taking place before the fight was officially announced.  According to Sparrow, he wanted pre-fight steroid testing to take place between the two fighters.  “It’s absurd that they didn’t want to do the testing.  I pushed for it for both of us to have to do.  It just doesn’t make since, because we are both ranked in the top fifteen in the world.  It’s the professional thing to do, especially since you’re coming from a camp that has tested positive in the past.  What Sparrow is referring to is the fact that Saul Alvarez tested positive for a banned substance prior to his rematch with Gennady Golovkin.  It caused a suspension for Alvarez and the eventual rematch date to be pushed back.

Sparrow is not accusing Team Garcia of doing anything wrong in their pre-fight preparation.  He simply feels as though this type of testing is something that should be done once you reach this level of your career.  “It has nothing to do with the cost of the testing.  Everyone is saying that it is so expensive to do, but we were willing to pay for it,” said Sparrow.  “We were willing to take a pay cut out of the purse in order to make sure that the testing was done.  We would have paid for both our side and his side to be tested.  They didn’t want to do it.”

With a victory over Ryan Garcia on Saturday, Avery Sparrow would once again prove to the world that he is not only a talented fighter.  By defeating the highly touted Garcia, Sparrow would prove that his skills and his career should be taken seriously as a contender.  While a victory doesn’t ensure him a title shot, it should however continue him down a path towards bigger pay days.  Unless of course yet another victory as the underdog would in turn have other top-rated contenders continue to shy away from facing him as they pad their records with lesser competition.  All that remains to be seen and these answers will start to come to light after the fight.

Whichever way it turns out on Saturday night, one thing is clear about Sparrow - He is more than comfortable and confident in what he brings to the ring on fight night.  Regardless of who he faces, his opposition better be ready to bring their hard hat and lunch pail to work on fight night. 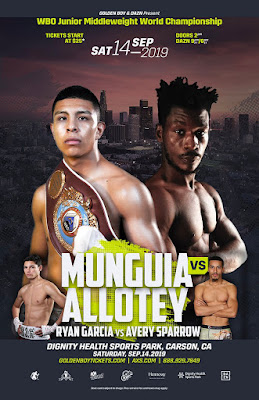