Heading into this Saturday night's fight with Ramon Alvarez (27-7-3)(16 KO’s) (1 NC), Erislandy Lara (27-3-1)(11 KO’s) will set out to prove that he is still one of the top fighters in the talent rich super welterweight division (Fox 8 p.m. ET).  For the 36-year-old former Cuban amateur champion and former WBA champion, a victory in this fight could easily put him back in place to challenge for one of the major championships.  It wasn’t long ago that Lara was the man viewed as the best fighter and champion at 154-pounds prior to his loss to former champion Jarett Hurd in April of last year.  It was a loss that some felt was controversial after what turned out to be twelve grueling and entertaining rounds of action.

With father time not on his side, along with Hurd all but set to have a rematch with Julian Williams (current WBA/IBF champion) in December of this year, it seems that a victory for Lara on Saturday means future major pay days and the chance to reclaim the number one spot.  It also helps that the WBC portion of the title is held by Tony Harrison, who should be facing the man he beat for that, title Jermell Charlo, in a rematch.  These fighters mentioned compete under the Premier Boxing Champions (PBC) banner, which means that making a championship fight for Lara, if he were to be victorious, much easier.

While this fight for Lara is an important moment in his already successful career and may dictate just where the rest of his career goes, one boxing promoter who has dealt with the PBC shed some light as to why so many fighters remain loyal to the PBC and its lead advisor, the always elusive Al Haymon. “Al is a genius at getting fighters paid on a constant basis.  He is great at recycling fighters and putting them back into competitive fights,” stated the promoter.  “Just look at what he did for Chris Arreola.  Most of the other promoters would have felt that his career was over.  That his best days were behind him.  They may have even just used him as a stepping stone for younger prospects in their stable.  He (Al Haymon) allowed Arreola to earn more money with more fights and Arreola proved that he is far from a shot fighter.”

Haymon is technically just an advisor and none of the fighters are under promotional contract with the PBC.  Over the years, many of the PBC fighters have been offered lucrative contracts with large lump sums of money to jump ship and join the other major promotional outfits.  However, most of the fighters remain faithful to the PBC and Haymon due to what the promoter stated above.  In the case of Lara, due to his advanced age and being on the cusp of yet another title shot, and despite the sense of security in knowing that a loss doesn’t necessarily mean that his time in the lime light is over, Lara won’t be taking any chances against Alvarez and doesn’t want to find out what awaits his career should he lose.

“I came (to the United States) and I achieved almost everything that I have asked of myself,” stated Lara.  “I was world champion for many years and the most important thing is that now I feel very happy because they gave me another chance for the world title and to be crowned again.”

One can’t really blame Lara for having the mindset that he carries in that he is an undefeated fighter.  All three of his losses have been close decisions.  They include a majority decision loss to former two division champion Paul Williams in 2011 and a split decision loss to the sports current biggest box office draw Saul "Canelo" Alvarez in 2014.  While most felt that Alvarez did enough to win the fight, it was a fight that saw Lara confuse the younger Alvarez at times with his boxing skill.  Aside from Alvarez’s loss to Mayweather and two recent fights with Gennady Golovkin, his fight with Lara was the toughest of his career.

This adds a bit of intrigue to this fight on Saturday night.  Ramon Alvarez is the older brother of Canelo Alvarez, and is himself trying to capitalize on this opportunity to take his own career to the next level.  For all the praise that his younger brother has received as one of the best fighters and the sports biggest star, Ramon has yet to have a truly career defining victory of his own.  “I will work to make things very clear to Lara that I am not my brother and that this fight will not be the same,” stated Alvarez.  “This is everything for me.  To make my own legacy.  My own path and show I got here with nobody’s help.”

After his fight with Hurd last year, a fight that many felt was the fight of the year, Lara returned to the ring and fought the always dangerous Brian Castano of Argentina.  It was yet another fight that Lara thought he won, but it ended in a draw, which again adds more meaning to this fight with Alvarez.  Despite those constant opportunities to make money that are given to fighters that make them stay loyal to PBC, those types of opportunities and paydays will eventually run their course if a fighter can no longer produce positive results.

With the added pressure of what a victory would mean for both careers and the underlining story of a type of revenge for Lara against another Alvarez, Saturday nights fight between these two veterans could easily turn into an exciting battle and should have fans tune in to this night of action. 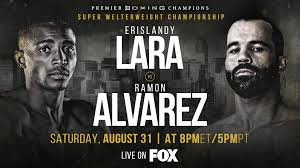