WWE Clash of Champions emanated this evening from the Spectrum Center in Charlotte, North Carolina, home of the NBA’s Charlotte Hornets.

Aside from eight WWE titles being contested, this pay-per-view carried a supreme level of importance from a business standpoint as well. After the highly successful AEW “ALL OUT” pay-per-view a couple weeks ago treated fans to quite possibly one of the most entertaining shows of the year, the pressure was on for the WWE to step up their game.

Among the questions to be addressed: 1) Would WWE push - or perhaps finally break - the boundaries of their frustrating PG rating? and 2) Would thousands of subscribers lash out at WWE for continued buffering issues since the inception of their updated streaming platform that ruined Summerslam for countless members of the WWE Universe?

These are all of paramount importance with NXT debuting on USA this week, Smackdown moving to FOX in October (and still not giving the network the “edgy” product they want), and AEW premiering in a matter of weeks on TNT. These storylines along with eight titles contested would paint the picture for the evening.

The opening contest of the main card pitted the recently crowned RAW Tag Team Champions Rollins and Strowman (scheduled to face each other later in the evening for the Universal Championship) against Roode and Ziggler who earned their shot after coming out victorious from the largest tag team turmoil match in WWE history recently on RAW. In the closing moments of the match, Strowman attempted to knock Ziggler off the ring apron only to have Ziggler pull the ropes down so that he tumbled out of the ring. With Rollins distracted, we received a truly glorious conclusion to the bout as Roode got the upper hand on The Beastslayer and executed a flawless Glorious DDT to earn the pinfall.


Blink and you would have missed the end of this match. As the referee was distracted with Charlotte Flair while Bayley laid in the corner, the champion removed the bottom turnbuckle cover. As Charlotte went to grab Bayley, she was propelled head first into the exposed steel turnbuckle. The devastating effect of this blow left Charlotte incapacitated allowing Bayley to earn the quick pinfall.


The Revival practiced what they preach and took their old school approach on the road to victory in this contest. First, they strategically destroyed the knee of Xavier Woods and later proceeded to take Big E out of the equation as they executed The Shatter Machine out on the arena floor. With Woods still ailing in the ring and no help in sight, The Revival delivered another Shatter Machine on him and rather than score an easy pinfall, Dawson cinched in a reverse figure four leglock for the submission victory.


In a match that was clearly carried by Bliss and Cross, the only real offense mounted by Fire & Desire was when they executed some brief tandem offense in the form of a high-low on Bliss. This advantage didn’t last long as Nikki Cross hit the swinging neck breaker with Rose’s legs propped up on the top ropes for the pinfall victory.


The first few minutes of this match were ruined by Sami Zayn supplying obnoxious commentary as he strutted around the ring until his mic was mercifully cut off and we could get down to business. This match saw The Artist Known As Shinsuke Nakamura attempt to continue his title reign while The Miz was striving to earn his ninth Intercontinental Title. Zayn proved to be the difference in this match as The Miz finally had enough of his antics in the closing moments and proceeded to chase him around the ring. Unfortunately for The Miz, he didn’t see Nakamura laying in wait on the other side of the ring and as he rounded the corner, he was greeted with a jumping knee strike to the jaw. Nakamura then rolled Miz back into the ring and sealed the deal with the Kinshasa for the victory.


After a lengthy hiatus, Sasha Banks returned a few weeks ago with a vengeance and it was apparent from the get-go that The Man was explicitly in her crosshairs. As Banks became frustrated that she could not put away Lynch with The Bank Statement, she turned to some dirty antics as she introduced a chair into the fray. This soon backfired on Banks as The Man picked up the chair and swung for the fences. Unfortunately for the referee, he took the first shot that laid him out. Lynch then laid waste to Sasha and the fight spilled into the arena. Once the women finally made their way back to the ring, Lynch continued her vicious assault on Banks even though she had long since been disqualified. WWE officials finally rescued Banks as Lynch seemed poised to pop out her shoulder with the Disarmer while using a steel chair for leverage. Needless to say, this rivalry is far from over.


After coming up short against Kingston at Summerslam, The Viper was given another opportunity at the WWE Championship this evening against someone who’s had a more improbable title reign than Mr. McMahon’s back in the Attitude Era - perhaps that’s a little harsh but oh well. This was by and far the most lackluster match on the card as Kofi unbelievably dominated Orton for a good deal of the contest and the crowd was not engaged - at least not in a positive fashion as you could hear boos echoing out. The only time the crowd rose to their feet was when Orton nailed Kofi with an RKO Outta Nowhere, however, Kofi placed his leg on the rope to break the pinfall attempt. Orton tried to finish Kofi once and for all with the punt to the skull but Kingston evaded it and landed the Trouble In Paradise to retain his title.


After weeks of speculation as to who was responsible for attack after attack on Roman Reigns, it was finally revealed that Rowan, not Daniel Bryan, was the mastermind. Roman Reigns was out for vengeance this evening as he entered the ring with Rowan in a no disqualification match. It appeared late in the contest that Reigns would overcome being put through not one, but two, tables to come out victorious over Rowan. After attacking Rowan with a TV camera at the top of the stage, Reigns seemed poised to run down the ramp for a spear or Superman punch, however, he was intercepted with a boot to the face by a returning Luke Harper! The two proceeded to severely beat down Reigns just before Rowan finished him off with the Iron Claw.


After coming out unsuccessful in their defense of the RAW Tag Team Championship earlier in the evening, partners became foes as Rollins and Strowman stepped into the squared circle again - this time with Rollins’ Universal Championship on the line. The real highlight of this match was a legit splash that Strowman landed on Rollins from the top rope, however, it wasn’t enough. Rollins had to put work in this evening to keep his title as it took four curb stomps and the Pedigree to finally overcome The Monster Among Men. As Rollins made his way to the top of the entrance ramp in victory, the arena went black. Then a spotlight illuminated “The Fiend” Bray Wyatt holding a subdued Rollins. First, Wyatt put Rollins down with a Sister Abigail just before the lights went out again. This would not be all, however, as the two were illuminated again, this time with Wyatt’s fingers shoved down Rollins’ throat as he choked him out with the Mandible Claw to close the show. 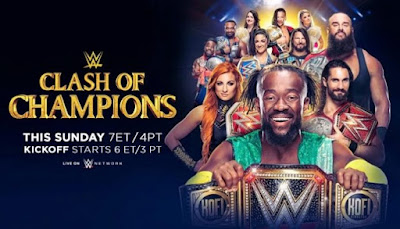