Haney wins 23rd as a professional; Serrano too much for game Hardy

After four rounds of Devin Haney (23-0) (15 KO’s) using his speed of hand and foot to completely destroy Zaur Abdullaev (11-1) (7 KO’s), the referee on advice from the ring doctor stopped the fight.  Abdullaev suffered a broken orbital bone after Haney peppered him with jabs and powerful looping right hands.

Just twenty-years-old, Haney captured the WBC Interim Lightweight title and is the number one contender for the current champion Vasyl Lomachenko.  That fight will likely not take place in the near future, but Haney once again put the boxing world on notice with his dominant performance.

Serrano is too much for the game Hardy

Serrano came out guns blazing and nearly stopped Hardy in the first two rounds.  Hardy proved that she is indeed worthy of all the praise of being mentally tough, as she took all Serrano had to offer and gave it her best throughout all ten rounds.

Hardy had some moments of success, but they would last briefly because Serrano would regain control with her overall better skills.  All three judges scored the fight for Serrano 98-91 twice and 98-92.  Katie Taylor awaits the new featherweight champion, which could be a big fight in New York.

A check left hook dropped Kuzmin in the fifth round, but Hunter wisely got on his toes and continued to out box Kuzmin, the much heavier puncher of the two.  Heading into the final three rounds, Hunter was in control of the fight with Kuzmin searching for a big punch to end the fight.

It was not to be for Kuzmin as Hunter continued his formula for success until the final round clearly winning the fight.  Now placing himself in position for bigger fights in the future, all three judges scored the fight 117-110 in favor of Hunter. 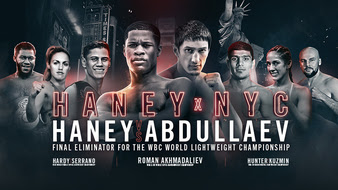