Formerly known as Sands,  boxing returned to the newly established  Wind Creek Bethlehem Casino, where another card of intense action was displayed. Over four months ago,  fight fans and those covering the sport had the pleasure of witnessing local talents, traveling warriors and even boxers making their debut at the same ring fought in this September 14th  card. The Weigh-In will breakdown each outcome, from first fight to the last, in what was another extraordinary night for the sport and it's spectators watching from Kings Boxing Promotions Facebook page.

Wheeler is one of the boxers who made his pro debut in this arena four years ago, here at his hometown in Bethlehem. Wasting no time in his third professional bout, the pressure was dictated early and instantly. In the first round, blinding combinations put Zapata in a difficult spot, with nothing to answer with, forcing the referee to stop the bout under the two minute mark of the first round. Wheeler wins big In the first round to start off the night. Result: Wheeler win via TKO

Undefeated Mullins from Newark, Delaware opened up the fight with crisp outside fighting, finding much success with the jab early on.  Oren found his place on the back foot for brief moments after the first round, yet the thudding, quick and sudden body shots from Mullins would keep the second round close. On top of the potshots by Mullins, he has done everything with his arsenal  in this bout, winning most the rounds, causing Oren to start off the final round  strong and having his way with the needed power shots. The cool collected Brandon Mullins returned with his own power counterpunches and secured the round and fight,  winning the bout via unanimous decision (judges scored the bout 39-37 across the board).

A fight at the 147 lb. weight class may have been the fight of the night, and the only way to describe the intense action from both fighters would be two men in a phone booth. Not the easiest fight for judges to score and after the first round, Johnson was landing accurate counters, potshots, looking really sharp before entering the halfway point of the six round contest. Hutchinson, had a dramatic return in round 4, by placing sensational power shots that left the spectators amazed, considering Johnson stayed on his feet.  The crowd was relatively silent when listening to the score cards and Kashon Hutchinson fought hard to win a unanimous decision with all three judges scoring the bout 58-56.

The ABO champion, undefeated Martino Jules, is another fighter who is no stranger to this venue in Bethlehem.  Always bringing the entourage of fellow Allentown fans, as well as  pleasing his viewers each time his steps into the ring, the first two rounds were slow paced, with slick generalship by Jules as Stoute continually chased and made solid effort to land his offense. The high caliber and diverse arsenal in Jules would be too much in the third round, as a blinding jab-straight combination floored Stoute, who was unable to get up for the count. This KO victory for Martino Jules was another one to remember and arguably the best performance of the night next to this following bout.

The shortest fight of the night and also the most explosive finish. If there was a victory to match the Martino Jules bout, it would be the devastating first round KO from the hometown favorite, Torres. The fight started with Torres landing the hardest counters ever, which caused a knockdown over Waites (that was ruled a slip). Torres must have known he had his opponent hurt, because shortly after, he landed a ferocious combination to drop Waites again, which needed no count by the official in the ring. Superb first round KO victory for Torres as he elevates to 6-0.

Heart, guts, skills and basically a little bit of everything in this spectacular matchup. The only fight to match and maybe even top the Johnson- Hutchinson bout. Hernandez came out the first round with a high-guard, pursuing pressure and aiming to the gut downstairs with significant power. The energy in and out the ring was constantly changing, as the second round was close, but following on - the crowd witnessed Williams knocked down three different times, JUST to see him get back up and box at a phenomenal pace, not just surviving the rounds, but trying to win them back. The last round was Williams' best, as he closed in with his strongest combinations that appeared to have Nico hurt.  At the final bell, both fighters received huge applause and it was Nicolas Hernandez who earned the unanimous decision victory (76-74, 77-73 *twice).

Spring participated in what was considered 'fight of the night' back in May and found himself in a stern match where finding rhythm was not easy.  Pennington started off busy and full of pressure after the opening bell, continuously landing over hands to the body and up top. Spring showed incredible grit here, never going down all the way to end.  Result: Courtney wins via unanimous decision.

It's no surprise that the main event of the evening would have it's work cut out in terms of matching all the bouts before hand. Particularly not a concerning issue for Mykal Fox, who would display pure dominance from round one all the way to round ten. The key to beating Bernardo was working off the jab, constantly working on the outside.  Result: Fox wins via unanimous decision (100-90 on all cards).

That wraps up yet another successful and beyond entertaining night of boxing.  Kings Promotions continues to dish out quality matches that The Weigh-In Team always looks forward to cover. 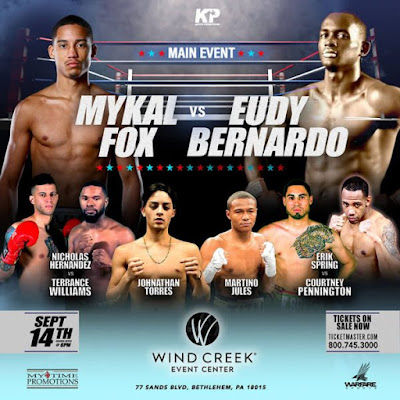