All the marquee arenas in the western hemisphere that host boxing are located in cities of reputed glamour and glitz. London’s Wembley Stadium, Manhattan's Madison Square Garden, and any large arena in Las Vegas are renowned for different reasons. Las Vegas' lights and glitter, Madison Square Garden’s illustrious history plus it’s midtown address, and Wembley’s enormity and raucous fans within a gentlemanly behaved London, England. Brooklyn, New York is not as cultured as London or glamorously Manhattan trendy. “Forget about it!”, Brooklyn will never match the gilded gaudiness of Vegas. With its endemic personality Brooklyn can boast, there is no other place like it on the planet. Located in ethnically diverse Downtown Brooklyn, the Barclays Center holds its own at hosting pro prizefighting events with any of the aforementioned sites. A walk up crowd on the evening's affairs, always fills any remaining seats with enthusiasm.

The lobby at the Hampton Inn filling up with undercard prizefighters and their crews awaiting to grab shuttle ride to the Barclays Center. Striding through the revolving doors onto the concrete, in front of me an idling mini bus AKA “The Shuttle”, to my right a block away, the Manhattan Bridge that crosses the East River connecting Downtown Brooklyn to what was formerly known as the “Five Points District” and currently named “China Town.” Google Maps informs, in the opposite direction from that span, it is just over a mile and a half down Flatbush Ave onto Atlantic Ave for a pedestrian to arrive at the Barclays Center. I forsook a free lift and decided to hoof it. A blatant lie about this choice would suggest getting some fresh air, but the soot stained facades of the tall buildings would imperiously disprove that phrase.

Lights changing, voices rising, humans strutting and jogging, as automobiles roll in both directions. Downtown Brooklyn is in constant motion.

A twenty something guy approaches me from the rear, “excuse me sir. I’m sorry to bother you. My mother is sick and I have to see her. I lost my wallet with my paycheck in it. Could you please give me fifteen dollars for the bus to Long Island?”

I examine a lucid, cleared eyed inquisitor, and deduced he was no junkie. Further inspection found him wearing a pair of suede, leather accented Timberland boots. My thoughts, were that this grifter did have a job and his billfold, and scored chump change scheming. Interesting that a cheap flim flam artist chose me as an easy mark. A bit insulted, I replied “NO” and brushed off this millennial conman.

As always, I purchased a pretzel and diet coke from a Kurdish looking street vendor, and sat in front of the arena and chowed, as a queue formed outside of the Barclays Center.

Polish countrymen come in multitudes to Barclays supporting any native who climbs between the ropes. When heavyweight Adam Kownacki of Poland crushes foes, the P.A. system churns out Poland’s national anthem, initiating a resounding vocal harmonizing in unison among the faithful.

The pound-for-pound coronation of Errol Spence Jr., as the best in the land, has been supported by this venue. Deontay Wilder has also proven before the Barclays' faithful he can whip anyone he hits with his concrete shattering right hand.

Brooklyn has a unique style and it’s residents have an accented speech that is recognized globally. Sporting fans world wide should acknowledge the Barclays Center importance to paid fist trading.

The following morning…...Bumps, bruises, scratches, stitches, and hurt ego’s indulged in the Hampton Inns' continental breakfast. Managers and trainers discussed future moves and possibilities over syrup soaked waffles and sausages. Some defeated boxers smile and enjoy the meal with friends. Other conquered pugilists chew their food with bowed heads until some good natured fellows see their discourse and pull up next to him with assuring words, that everything will be alright. Within moments this beaten man sits up in his seat and grins as he shovels grub through a pair of fat lips. When it is time to leave, the victors jump up and rush to the shuttle anxious to get home and tell tales of grandeur. Boxing close knit fraternal members bid adieu to one another. Back through the revolving doors for the last time this weekend, carrying a suitcase and briefcase, I walk to a fifty dollar a night parking garage, get my car, pay my fee, and eventually cross the Verrazano Bridge on my way home to “Champions Rest,” as Brooklyn maintains it’s perpetual motion.

I finished 2018 where I started it at the Barclays Center. I began 2018 last January, when Errol Spence defended his welterweight world championship laurels throwing Lamont Peterson a beating. I have ended the year watching the Charlo twins fill the venue with a near sellout crowd that booed disputed decisions in both their bouts.

The boxing future is bright as the blue lettered marquee of the Barclays Center. The sport is filled with talent globally and a billion dollars of revenue is being invested from media outlets DAZN, Fox network, ESPN+, and Showtime cable. All this cash makes bouts happen and combatants will square off in first rate matchups. No need for a fortune teller's crystal ball to see 2019 will be a great year for pugilism…...Until next time...Keep Punching! 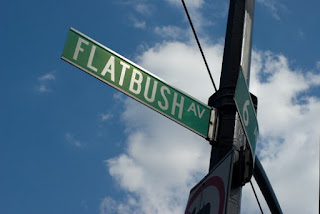