WWE TLC-Table, Ladders, and Chairs, emanated from the SAP Center in San Jose, CA this evening. The loaded ten match card was highlighted by five title bouts, one of which also marked the landmark, first ever Women’s Tables, Ladders, and Chairs match.

It was nice to see R-Truth make an appearance on a pay-per-view doing something other than comic relief or a dance break. The former TNA/Impact Wrestling heavyweight champion who’s never seemed to have a legitimate push in WWE teamed with Carmella to battle Jinder Mahal and Alicia Fox in the finals of Mixed Match Challenge, WWE’s Facebook Live program, with the winners being awarded spots in their respective matches at January’s Royal Rumble. Carmella put an end to this contest as she trapped Alicia Fox in the Code of Silence for the submission victory. With the victory, R-Truth and Carmella will not only be entered in the Royal Rumble but will also enter at number 30.

Sheamus delivered an abrupt end to this contest with a vicious Brogue Kick to the jaw of Xavier Woods to afford him the opportunity to capture the 1-2-3.

There was a great deal on the line in this contest as Baron Corbin needed to win in order to become permanent General Manager of RAW, whereas, a shot at Brock Lesnar for the Universal Championship was at stake for Strowman. Corbin expected to win by forfeit due to Strowman seemingly being out with an injury, however, as the official (who happened to be Heath Slater) began his ten count, Strowman‘s music hit and The Monster Among Men made his way to the ring in a sling. Strowman proceeded to grab a mic and remind Corbin that their match was a no disqualification match and anyone could help him. Shortly thereafter, accompanied by Bobby Roode, Chad Gable, Apollo Crews, Finn Balor, and Heath Slater, they proceeded to lay the smack down on the interim general manager. As Corbin attempted to flee the arena, Kurt Angle shocked the crowd and drove him back to the ring. After Corbin was victimized by those he had done wrong to on RAW, Strowman stood over him and pinned him with one foot. As a result, Corbin is no longer the GM of RAW and Strowman will face Brock Lesnar at the Royal Rumble for the Universal Championship.

Just as a refresher for you all, the only way to win a Tables Match is to put your opponent through a table, so no pinfalls or submissions. The odds were stacked as Ruby Riot had the rest of the Riot Squad in tow until Natalya put Liv Morgan and later Sara Logan through tables. Just when it appeared Ruby had the upper hand with Natalya seated on the top turnbuckle, Natalya blocked her attempt at a Frankensteiner and power bombed Riot through the table set beneath them for the victory.

McIntyre dominated the majority of this bout until the fight was taken outside. After McIntyre victimized Balor to the point where he easily threw his limp body back into the ring, his old running mate Dolph Ziggler emerged from the crowd to deliver a super kick to McIntyre. Dolph proceeded to obtain a steel chair, and as he attempted to strike him, McIntyre kicked him in the face. McIntyre then made his way back into the ring with the chair seeking to issue more punishment to Ziggler but lost sight of Balor who dropped him to the canvas and finished him with the Coup de Grace for the pinfall.

The conclusion of this match arrived after Orton’s attempt at an RKO onto four chairs he lined up was thwarted. Mysterio knocked Orton onto the chairs and as he sat there in a daze, Rey rebounded off the ropes behind him and vaulted over The Viper into a unique rollup pin for the victory.

This contest followed the narrative of the unstoppable force attempting to impose her will on the much smaller Rousey. Jax attempted to put away Rousey with a Samoan Drop from the middle turnbuckle only to have her reverse it into a power bomb and subsequently lock in the armbar submission to retain her title.

This bout was a rematch of Bryan’s shocking victory over The Phenomenal One on the final episode of Smackdown Live leading into Survivor Series last month. It appeared late in this contest that Styles had finally turned the tides in his favor as he landed a springboard 450 splash on a prone Bryan, and subsequently engaged him in the Calf Crusher submission. Bryan was able to reach the bottom rope which prompted the ref to break the hold and he escaped the ring. Once Styles was finally able to get Bryan back into the ring, he rolled him into an inside cradle only to have Bryan shift his weight so Styles’ shoulders were pinned for the 1-2-3.

Dean Ambrose’s betrayal of his Shield brethren came to a head this evening as he challenged Seth Rollins for the Intercontinental Championship. Aside from Seth Rollins’ execution of a top rope superplex that he rolled into a Falcon Arrow, this match was drawn out way too long with significantly less action than one would’ve expected from these two performers. At one point, the crowd even began a “This is boring” chant. In the end, Rollins became so frustrated with his inability to put away Ambrose that as he attempted to land a finishing blow, in the form of what appeared to be a stab at the Curb Stomp, Ambrose sprung to his feet and hit Rollins with the Dirty Deeds to win the title.

This match signified the first ever women’s TLC match earning itself the main event slot on the show. In order to win the match, one of the women needed to scale a ladder and retrieve the championship belt suspended above the ring. This bout finished in shocking fashion, as Charlotte and Asuka jockeyed for position at the top of the ladder directly below the hanging title belt, Becky returned to the ring with another ladder that she set up next to them just as Asuka was knocked off the ladder down to the canvas. Charlotte jumped over to the ladder Becky ascended in an attempt to halt her progress towards the belt. Just then, Ronda Rousey made her way to the ring and tipped over the ladder they were on and knocked them out of the ring. This allowed Asuka an open path up the lone standing ladder as she was able to retrieve the title and become the new Smackdown Women’s Champion! 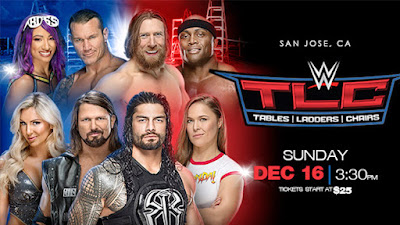