Author of From Boxing Ring to Battlefield: The Life of War Hero Lew Jenkins 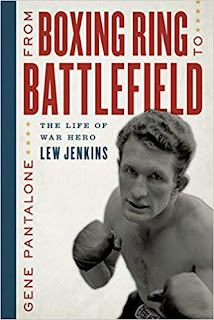 Available for order on Amazon and from Rowman and Littlefield

“Too often the history of boxing boils down to tales about heavyweights, as if the exploits of Sullivan, Johnson, Dempsey, Louis, Marciano, Ali, and Tyson are all that matter. Well, Lew Jenkins—lightweight champion, war hero, and a danger to himself as much as any opponent—mattered. His is the story of survival in the ring, in two wars, and in life. Gene Pantalone’s biography of Jenkins richly recounts a fascinating life. ‘Only in America,’ as the great Don King always said.”

In late 1923, William Lawrence “Young” Stribling, the pride of Georgia, had just turned nineteen one day before coming to the Long Hill Health Farm of former lightweight champion Freddie Welsh in Chatham Township, New Jersey. The brown-haired, blue-eyed, good-looking kid was a promising boxer. Stribling’s boxing was a family undertaking. His father managed him, and his mother was known to aid in his training. He arrived at Welsh’s to prepare for a New Year’s Day bout against Dave Rosenberg. He hoped to train with his idol, Jack Dempsey, who was a good friend of Freddie Welsh and had used his farm to train for bouts including the first million-dollar gate against Georges Carpentier. Stribling was a seasoned boxer despite his age. He began boxing professionally at the age of sixteen, compiling a record of 67 wins, 3 losses, and 13 draws before arriving at Welsh’s, a career for most boxers. Stribling would have a long, prolific career. He would compile a record of 223 wins, 13 losses, 14 draws, and another 39 newspaper fights. One year he fought 45 times. In total, he fought 291 bouts knocking out 129 opponents, a knockout record only surpassed by two people, Billy Bird and Archie Moore.

Welsh gave the Striblings a wheelbarrow for a publicity photograph. It appeared in newspapers showing Young Stribling pushing Ma and Pa Stribling, which the press dubbed them, and one other person. While there, he fulfilled his wish of training with the heavyweight champion. The youthful Stribling impressed Dempsey with his skills.

On January 1, 1924, despite being the underdog, Stribling defeated Rosenberg. He received a twelve-round decision at the First Regiment Armory in Newark, New Jersey. He won almost every round. Stribling fought six times that January. He won every bout except one he lost on a disqualification. In the loss, he was in the lead, but after repetitive cautions for hitting on the break, referee Phil Pritchard disqualified him. His father then hit the referee. Stribling fought thirty-six times in 1924, losing three bouts.

Young Stribling was the only man that Max Schmeling successfully defended his heavyweight title against. Schmeling trained in Conneaut Lake Park, Pennsylvania, for the July 3, 1931, Stribling heavyweight title bout. The fight was first scheduled in Chicago but changed to Cleveland. Stribling’s camp in Geauga Lake, Ohio, was ninety-three miles away from Schmeling’s camp.

Stribling, being a pilot, and accompanied by a New York newspaperman, borrowed a friend’s plane in Akron, Ohio. Stribling flew over his training camp and then proceeded to the Pennsylvania border and Schmeling’s camp. Schmeling was in the ring sparring in the second round with George Panka of Pittsburgh when Stribling flew his plane overhead. The plane was not more than two hundred feet above the spectators as they gasped. He returned twice to repeat the bold feat and then hurried back to the Cleveland airport to receive a reprimand from his father.

“It seems that Stribling broke away from the apron strings,” Nate Lewis said, a Stribling camp member. “He probably will do the same thing when he gets into the ring with Schmeling Friday.”

On July 3, 1931, the two met for the world heavyweight championship. Stribling was no longer the teenager that had come to Freddie Welsh’s Long Hill Health Farm to train. He was twenty-six years old and now had a record of 238 wins, 13 losses, and 17 draws. Schmeling was less than a year younger. They fought at Cleveland’s new Municipal Stadium on the shore of Lake Erie before an estimated 35,000 spectators. The disappointing crowd occupied a third of the big double-decked structure. The gate approximated at $323,000 was one of the lowest in heavyweight title history since the post-World War I boom days began. The depression that started in 1929 was affecting boxing.

Schmeling had Stribling bruised and bleeding in the last half of the fight. In the fifteenth and final round, Schmeling connected with his lethal right to Stribling’s chin. Stribling went down and looked unable to rise but beat the count at nine while clutching onto the ropes. He appeared out on his feet. Schmeling dashed toward him while the crowd yelled, “Stop it!” With fifteen seconds left in the round, Stribling’s father tossed in the towel. Referee George Blake stopped the fight, lifting Schmeling’s arm in victory. It was a technical knockout in the fifteenth round for Schmeling. A boxer for the first time stopped Young Stribling. Schmeling was euphoric but brought the stunned Stribling to his corner.

After the fight, Stribling said it was an injustice to stop the fight with fourteen seconds left. Stribling argued that Schmeling knocked him down only once, and he might have continued to the end. The Garden crowd, including his father, saw Stribling was in no state to continue, and another vicious hit could have caused a severe injury. Boxing finally recognized Schmeling as the legitimate titleholder. The Ring magazine declared their bout the 1931 Fight of the Year. The New York State Boxing Commission finally had Schmeling’s name engraved on the Tunney-Muldoon Trophy for heavyweight champions, which they had denied him after he won the title on a disqualification against Jack Sharkey.

Stribling’s last fight was a win over “Slapsie” Maxie Rosenbloom in 1933. In October of that year, Stribling was struck by a car while riding his motorcycle on his way to the hospital to visit his wife and newly born baby. Stribling’s foot was badly mangled, but he said, “I guess this means more roadwork.” Physicians were astonished at his ability to hang on to life with a temperature of 107.5 degrees and pulse of 175. He was given a last privilege to see his wife and baby at the same hospital before he died two days later. He was inducted into the International Boxing Hall of Fame in 1996.