The largest independent professional wrestling show in history emanated Saturday evening from a sold out Sears Centre Arena just outside of Chicago, Illinois.  The event was promoted by Cody Rhodes and The Young Bucks, and the concept was sparked by pro wrestling journalist Dave Meltzer who tweeted that Ring of Honor couldn’t sell out a 10,000 seat arena. Cody Rhodes took that bet and the show proceeded to sell out in less than 30 minutes. The pay-per-view and the Zero Hour pre-show featured wrestlers from Ring of Honor, New Japan Pro Wrestling, Impact Wrestling, the NWA, and more who competed in a stacked, 11 match card.

The opening bout of the Zero Hour pre-show on WGN pitted two of the premier tag teams from Ring of Honor against each other, SCU and the nine-time ROH Tag Team Champions, The Briscoes. The match concluded as Kazarian was on the shoulders of Jay Briscoe while Mark was perched on the top turnbuckle. As Mark took flight, Kazarian amazingly caught him and power slammed him from his brother’s shoulders to the canvas to steal the upset victory.

This match featured many fan favorites from the world of wrestling including Hurricane Helms, Billy Gunn, Brian Cage, Moose, Bully Ray, Colt Cabana, Punishment Martinez, and even Jimmy Jacobs. It appeared that Bully Ray won the battle royal after he eliminated Chicago’s own Colt Cabana when a masked luchador got the jump on him and threw him over the top rope. The winner unmasked himself to reveal he was Flip Gordon and earned himself a shot at the ROH World Championship.

The opening contest on the pay- per-view, officiated by Ring of Honor’s Todd Sinclair, matched 20-year independent wrestling veteran Matt Cross with 22-year old MJF who was trained by current WWE superstar Curt Hawkins. Cross finished this contest in an impressive fashion as he laid out MJF with a springboard stunner to set him up for a beautifully executed shooting star press to seal the pinfall victory.

Introduced as the “Whole Reffing Show,” the special guest referee for this contest was ECW legend Jerry Lynn. The match itself featured 25 year ring veteran and SCU member Christopher Daniels as he squared off with Stephen Amell, star of the CW series Arrow, who represented The Bullet Club in the second bout of the evening. One of the many highlights of this contest was a coast to coast dropkick where fans witnessed Amell propel himself across the ring to kick The Fallen Angel in the teeth. This entertaining contest concluded as The Fallen Angel hit the BME (Best Moonsault Ever) to earn the victory.

The atmosphere was electric for this bout. Cody made his way to the ring accompanied by Brandi Rhodes, Diamond Dallas Page, and Tommy dreamer while Nick Aldis (formerly known as Magnus in Impact and husband of WWE Superstar Mickie James) was flanked by Jeff Jarrett and Daivari to add to the big fight feel. Cody withstood an enormous level of punishment from Aldis throughout the contest as it appeared he would retain his title. This, however, was Cody’s night to take the title once held by his father Dusty Rhodes as it celebrates its 70th anniversary. After he was able to withstand the Cross Rhodes, Aldis attempted a sunset flip only to be pinned down by Cody for the victory. Cody has certainly cemented his place as a bona fide star in the wrestling industry, a far cry from his days as Stardust.

This match featured Asbury Park’s own “Bad Boy” Joey Janela and the Bullet Club’s Hangman Page. This contest was absolutely brutal. In the end Page and Janela found themselves at the top of a ladder next to a table staged in the center of the ring. Page proceeded to pummel Janela with a phone before he hit the Rite of Passage off the top of the ladder through the table for the win. After the contest ended, the lights went out and several men in inflatable penis costumes lined the entrance ramp as Joey Ryan entered the arena! Ryan proceeded to flip Page with his penis (yes, you read that correctly) and followed that with a super kick to the face to lay him out driving the crowd into a frenzy.

Jay Lethal was welcomed with a huge pop from the crowd as he donned Macho Man Randy Savage’s attire from his original debut in WCW. This gesture marked the resurrection of his wildly entertaining Black Machismo gimmick as he was accompanied to the ring by Lanny “The Genius” Poffo, brother of the late great Randy Savage. One of the highlights of the contest was when Lethal tapped his inner Randy Savage and landed THREE elbow drops from the top turnbuckle. This match concluded as Black Machismo first executed a cutter off of the top rope and followed that with The Lethal Injection for the victory.

After the contest, Lethal and Gordon were ambushed by Bully Ray who rushed the ring with a chain in tow. Bully even rewarded Poffo for trying to intervene with an unceremonious kick between the uprights. Just after Bully set up a table, he was attacked by Chicago’s own Colt Cabana who came to the rescue. Cabana, Lethal, and Gordon proceeded to hoist up Bully Ray and power bomb him through the table.

This dream match pitted Bullet Club member and IWGP Heavyweight Champion Kenny Omega against Penta El Zero a.k.a. Pentagon Jr. The action was fast and furious as the contest lived up to its billing. Pentagon threw everything in his arsenal at Omega-a Pentagon Driver, a devastating Fear Factor on the ring apron, and a double stomp from the top rope only to have Omega answer with his own Fear Factor. The Cleaner, after hitting the V Trigger for the umpteenth time, was able to finish Pentagon with the One Winged Angel.

After the contest, the lights went out again.  When the lights came back up, something appeared different about Pentagon. As Omega turned around, “Pentagon” jumped to his feet, ran at him, and landed the Code Breaker! “Pentagon” then removed his mask to reveal some shenanigans went on in the dark and the real Pentagon was replaced with Chris Jericho! Y2J told Omega he’d see him on the Cruise of Jericho and left through the crowd.

The Bullet Club’s Marty Scurll squared off with the towering Rainmaker in this bout. It appeared late in the contest that Okada was doomed when he was pushed into Tiger Hattori “knocking him out” which lead Scurll to grab his umbrella. Unfortunately, Scurll was unable to capitalize as Okada hit two Rainmakers to solidify the victory.

The main event featured six of the best high flyers in the world, including the legendary Rey Mysterio who donned ring gear that paid homage to the classic attire of Marvel’s Wolverine. The pace was frenetic from the opening bell in part due to the participants in the contest and also because they were left with less than 20 minutes before the show would be cut off of pay-per-view. This contest was full of awe inspiring aerial attacks, hurricanranas, and, of course, SUPER KICKS! The conclusion of this match came as the Young Bucks finished off Bandido with the Five Star Meltzer Driver for the 1-2-3. 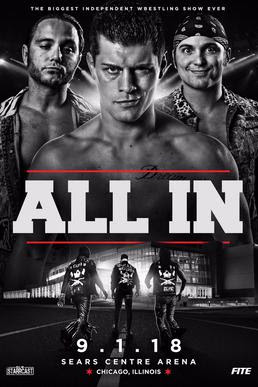