The WWE presented us with its latest installment of Hell in a Cell this evening from a jam packed AT&T Center in San Antonio, TX. The card boasted seven matches with five titles defended.

WWE wasted no time showing off its new red cell in its opening contest which pitted Hardy and Orton against each other. This has turned into a bitter feud between the two which commenced with Orton’s appearance at the conclusion of Hardy’s loss to Shinsuke Nakamura at Summerslam. The brutality of this match was a refreshing surprise as it pushed the boundaries of the PG-Era. Aside from a plethora of tables, ladders, and chairs, Orton was bloodied from the lashing his back took at the hands of Hardy and his studded belt, and the gash on his leg from a steel chair that broke upon the impact of a Swanton Bomb while it laid across his chest. Orton even displayed his sadistic side when he located a toolbox under the ring from which he procured a screwdriver that he drove through the gauge in Hardy’s ear! This display of unadulterated brutality concluded as Hardy scaled a ladder in the center of the ring as Orton laid seemingly lifeless on a table below it. Hardy did not have room to execute another Swanton Bomb so he proceeded to hang from the top of the cell. As Hardy dropped from the cell to land a splash, Orton rolled off the table leaving Hardy to plunge through the table. Despite the referee pleading for medical assistance, Orton forced him to count the 1-2-3 for the victory.

This contest came to fruition after Becky came up short at Summerslam, and finally reached her boiling point when she turned on her former best friend Charlotte and left her in a victimized heap in the center of the ring. This match concluded in shocking fashion as Becky rolled up Charlotte for the pinfall victory.

After dismantling The B-Team to win the tag team titles, McIntyre and Ziggler aimed to maintain a vice grip on the championship as they squared off with two thirds of The Shield, the formidable duo of Rollins and Ambrose. The frenetic pace of this match came to a screeching conclusion as Rollins executed a perfect superplex on Ziggler and attempted to roll into a follow-up suplex as he was unexpectedly hit with a Claymore Kick from McIntyre. Rollins collapsed with Ziggler on top of him for the pinfall.

Styles and Joe met again in a rematch of their title bout from Summerslam where AJ retained his title after he was disqualified for assaulting Joe with a steel chair. After Joe brutalized AJ for the majority of this match, the conclusion came in controversial fashion. Joe had Styles locked in the Coquina Clutch as AJ, while still locked in the submission hold, flipped over Joe pinning his shoulders to the mat. The referee counted the pinfall for Styles, however, Joe argued that AJ had tapped out before the count of three which the video footage substantiated.

After The Miz defeated Bryan at Summerslam, thanks to a foreign object introduced by his wife at ringside, tensions heated the past few weeks on Smackdown between the couples which lead to this encounter. After Bryan and Miz carried the load for much of this contest, Brie and Maryse found themselves alone in the ring. Brie seemed to take control after she shoved Maryse into the Miz knocking him off the ring apron, so he couldn’t rescue her again, until Maryse got the jump on Bella and rolled her up for the victory.

Alexa Bliss decided to invoke her rematch clause after dropping the title to Rousey at Summerslam making this her first title defense in WWE. Bliss came prepared this time around after she was embarrassed at Summerslam and executed her plan to target Rousey’s ribs to perfection. Rousey was able to persevere in the end as Bliss became overconfident and succumbed to an armbar which she couldn’t have tapped out to any faster.

First, Braun was incapacitated at Summerslam and unable to cash in his Money in the Bank briefcase after Reigns defeated Brock Lesnar to become the new Universal Champion. Then Braun attempted to cash in on RAW after Reigns defended against Finn Balor only to have Roman bailed out by his Shield brethren. This time there would be no escape with the title contended in Hell in a Cell with special guest referee Mick Foley. Half way through the match with Braun and Roman exhausted and laid out in the ring, Strowman’s new cohorts, Dolph Ziggler and Drew McIntyre, made their way to ringside only to be intercepted by Rollins and Ambrose. All four men made their way to the top of the cell leading up to the first “holy shit” moment of the match. Ziggler who appeared to want nothing to do with the Shield, began to climb down the cell only to be pursued by Rollins. The two proceeded to exchange blows while teetering off the cell before they both plummeted off the side of the cell and went through two announce tables.

Just when we thought things couldn’t get any crazier, the music of “The Beast Incarnate” Brock Lesnar echoed through the arena. Lesnar, with his advocate Paul Heyman in tow, made his way to ringside where Lesnar kicked the padlocked cell door open to get to the fallen combatants in the squared circle. Mick Foley attempted to intervene only to be pepper sprayed by Paul E. Dangerously for his efforts. Once in the ring, Lesnar picked up the fragments of a previously broken table and pummeled both Strowman and Reigns. With a scene of carnage left in the ring, the match was ruled a no contest as the show went off the air. 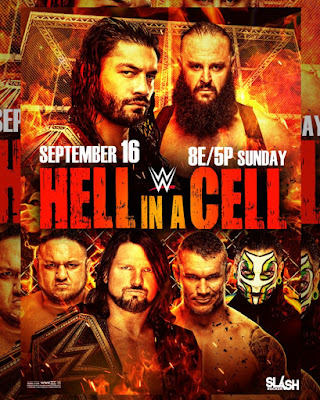