Kings Promotions continues their busy schedule of providing action fights for the Philadelphia and North East Pennsylvania area fight fans. On Friday night, September 14th, a nine fight card took place at 2300 Arena in South Philadelphia.  The card was featured on Fight Night Live, which is streamed on Facebook.  So far over 200,000 fans have viewed the action. Below are the results from this great night of action. 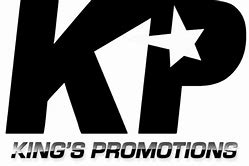 Shyngyskhan Tazhibay (6-0, 2 KOs) won a four round decision over Justin Johnson (6-18-6) in a welterweight fight. Tazhibay looked solid as he continues his development.

James Bernadin (1-0, 1 KO) stopped Christopher Burogos (1-3-1) at the 2:19 mark of the third round. Bernadin came out firing power shots and withstood the game effort from Burogos, who tested the new professional’s stamina and will. Bernadin was able to land power rights that finally halted the fight.

Yeri Andujar (1-0, 1 KO) stopped the returning Crystian Peguero (2-1, 1 KO) in the third round at the 2:36 minute mark. Peguero was considered the favorite, but was fighting for the first time in a year. Andujar blasted away at the body of Peguero from the start of the fight, which effectively broke down the favorite, who clearly suffered from his long lay-off.

In a good bantamweight fight, Alejandro Jimenez (3-0, 1 KO) defeated Jerrod Minor (1-2-2, 1 KO). After four rounds, it was clear that Jimenez was the winner, as he applied effective aggression behind a good jab to land the more telling power shots.

Former three time Olympian Anvar Yunusov (5-0, 2 KOs) proved yet again that he is a prospect to watch. After landing a crisp right hook that floored Angel Monreal (10-11-1, 3 KOs). Monreal rose to his feet and tried to survive with a jab. Yunusov would land a crushing straight left from his southpaw stance that ended the fight at 2:39 of the opening round.

Terrell Williams (17-0, 13 KOs) got a great night of work and a quality test from David Grayton (15-3-1, 11 KOs). Williams landed a crushing straight right hand that dropped Grayton in the first round. After another right in the third put Grayton down, it looked as though it would be a quick night for Williams. Grayton proved his value as he battled through the early knockdowns to push Williams into the middle rounds. This forced Williams to prove that he is a true near future contender as he had to battle his own fatigue and the on coming assault from Grayton. It was a little too much, too late for Grayton as Williams lasted to the final bell wining a ten round decision. Scores were 97-92, 98-89, and 98-90.

In the main event, Brandon Robinson (11-1, 8 KOs) warmed up in the second round and got to work landing hard body shots on Ernest Amuzu (24-4, 22 KOs).  Robinson's momentum continued into the third round and the two fighters started to exchange power shots when Robinson pinned Amuzu in the corner. As Amuzu escaped, Robinson landed a huge right hand bomb that made Amuzu walk backwards on spaghetti legs. Just as he reached the other side of the ring, Robinson landed a second right hand bomb that prompted the referee to stop the fight at the 2:04 mark of the third round. Robinson continues to improve, and at the age of 30 will be looked for more fights to rise up the ranks in 2019. 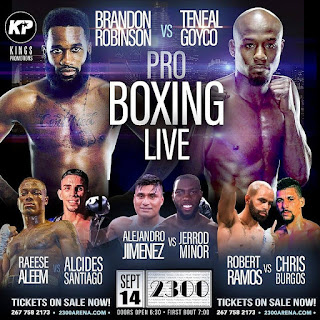 On Tuesday night September 25th, Kings Promotions returns to the Sands Hotel and Casino in Bethlehem, PA. Yet another nine fight card will take place that will feature a good eight round battle between Anthony Mercado (11-4, 9 KOs) and Victor Vazquez (10-4, 3 KOs). Both fighters have been improving as of late and Vazquez, who is co-trained by lightweight prospect Branden Pizzaro's father Angel Pizzaro, has impressed with his now disciplined jab, which he uses to set up his powerful right hand.

Also on this night, featherweight prospect Stephen "Scooter" Fulton (13-0, 6 KOs) will continue his rise through the featherweight ranks as he takes on the tough Esteban Aquino (12-5, 7 KOs).  Fulton is a former National Golden Gloves and Ringside champion. Fulton is always in an entertaining fight, and with Aquino is looking to prove that he is a true challenger. Look for this fight to be no different.

Tickets are still available and start at just $35. There is no bad seat in the house, and the Sands and Kings always provide fan friendly fights at a great price. Tickets can be purchased from the Sands Casino box office here. 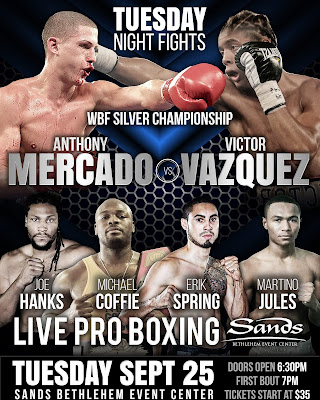