For the second night in a row, the WWE invaded the Barclays Center in Brooklyn, NY. A capacity crowd was on hand and chomping at the bit to bear witness to WWE’s marquee show of the summer for the 30th year in a row. Last night’s card boasted ten matches from the RAW and SmackDown brands with seven titles on the line.

After weeks of being outnumbered by The Show-off and Drew McIntyre, Seth Rollins shocked the WWE Universe by introducing the returning Dean Ambrose as his back-up on Monday Night RAW. In all honesty, this match did not have the crowd’s interest until Rollins hit a spectacular suplex off the top rope on Ziggler. In the end, it appeared Rollins was going to lose the match as he was distracted by Ambrose nailing McIntyre with Dirty Deeds outside the ring and Ziggler sized him up, and seemingly dead to rights, for the super kick. Rollins turned and beat him to the punch with a super kick of his own. As Ziggler was down, Rollins proceeded to finish him with the Curb Stomp. Your winner and new Intercontinental Champion, Monday Night Rollins!

The New Day earned the right to vie for the Tag Team Championship after they defeated The Bar (Cesaro and Sheamus) on SmackDown Live two weeks ago. Utilizing the Free Bird Rule, The New Day was represented by Big E and Xavier Woods. As the New Day began to build momentum after Xavier Woods landed an elbow drop on Harper from the top rope to the outside of the ring, Rowan put an end to that quickly as he bludgeoned The New Day with his hammer. This lead to a disqualification victory for The New Day, however, the titles can’t change hands in this manner so The Bludgeon Brothers are still your SmackDown champions.

Kevin Owens “earned” a chance at Strowman’s Money In the Bank contract in this contest after pleading with Stephanie McMahon for an opportunity to seek vengeance after what he considered to be a personal vendetta was carried out against him for several weeks by Strowman. Owens didn’t stand a chance in this one. After a few minutes of chaos, The Monster Among Men finally hit the running power slam for the pinfall victory.

This match became a triple threat encounter after Flair earned her way into the bout by defeating Carmella in a non-title contest on SmackDown Live. In the closing moments of the match, it appeared Becky was moments away from earning a win by submission as she had Carmella locked in the Disarm-Her. The Queen then emerged out of nowhere to hit the Natural Selection on Becky and pinned her to become the new champion. It appeared after the match that Becky and Charlotte were going to share a moment of sportsmanship as they hugged it out in the middle of the ring until Becky snapped! Becky proceeded to viciously assault Flair and walked out to a “You deserve it” chant from the raucous Brooklyn crowd who were energized by the heel turn.

This match had a nostalgic feel to it as both men main-evented countless shows together during their tenure with TNA/Impact Wrestling, so much so, that the crowd even paid homage with a “TNA” chant in the opening moments. This match was turning into a classic until the action spilled to outside. Joe decided to get on the mic and address Styles’ wife and daughter in the crowd which pushed him over the edge. Styles proceeded destroy Joe with a steel chair leading to the second title bout of the night ending in a disqualification.

The Miz vs. Daniel Bryan
Winner: The Miz

This was billed as a match eight years in the making dating all the way back to 2010 when Bryan was assigned as The Miz’s “rookie” in the early days of NXT. In the closing moments, Miz was knocked out to the barrier where his wife Maryse sat in the front row. As he hung over the barricade, Maryse slipped a foreign object into his hand that he used to knock out Bryan with as he attempted a suicide dive. Miz returned the object to his wife and quickly re-entered the ring to pin Bryan for the victory.

Balor threw the crowd into a frenzy as the arena faded to black and he made his presence known with his “Demon” persona coming to the forefront. Corbin got no offense in as he never was able to rid himself of the shock he faced with the presence of the Demon. Balor made short order of “The Constable” and finished him off with the Coup de Grace.

This was a return match from Extreme Rules when Nakamura stole the title from Hardy after an unceremonious shot between the uprights. After Hardy successfully connected on the Swanton Bomb only to have Nakamura grab the ropes as he attempted to pin him, Hardy escalated things to a whole new level. The Charismatic Enigma decided to not only climb to the top rope but also the ring post. With Nakamura prone on the ring apron, Hardy attempted another Swanton Bomb. Unfortunately for Hardy, Nakamura moved out of the way and he landed hard. The Artist was able to get Hardy back in the ring and hit the Kinshasa for the win.

After the bout, Randy Orton’s music hit as he walked down to the ring, stopped, and walked back out of the arena leaving the audience a bit confused.

Ronda toyed with “The Goddess” for a few minutes as she put on a display of strikes and Judo throws before she finally sealed the deal with an armbar to become the new RAW Women’s Champion!

Just before the match began, the Barclays Center erupted as the Monster Among Men made his way to the ring. Strowman proceeded to convey a foreboding proclamation to Lesnar and Reigns that he would be waiting at ringside ready to cash in his Money in the Bank briefcase against the victor. Reigns was on fire in the early stages of the match as he repeatedly punished The Beast with several spears before Brock attempted to put Roman to sleep with his ground submission game. As the action spilled out of the ring, Brock decided to take advantage of Strowman as he had his back turned and beat him down with his own briefcase and a steel chair, while throwing an F5 thrown into the fray for good measure. Unfortunately for Brock, he got greedy and took the steel chair into the ring in hopes of finishing off Roman. As Brock wound up with the chair in hand, Roman nearly broke him in half with a devastating spear to earn the pinfall and become the newly crowned Universal Champion. 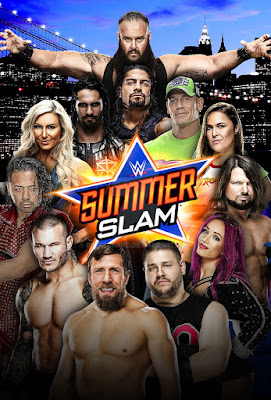