Allow me to set the mood for you if I may…deep in the heart of Phoenix, AZ stands the Celebrity Theatre, a structure that has stood since it first opened its doors in 1963, a structure that was designed by Beverly Hills architect Perry Neuschatz, a structure that was listed on the national Register of Historic Places this year, and a structure that has hosted such legendary performers as B.B. King, Black Sabbath, and Willie Nelson among countless others. Well tonight when the lights went down the fans in attendance weren’t gazing upon a stage complimented by instruments of music but rather the visceral octagon that set the stage for Iron Boy MMA 15.

Tonight, there were instruments but not those of the conventional sense, instead, they were the competitors themselves who entered ready to fight for whatever their cause may be – pride, competition, glory, hopes of a career in MMA, etc. Phoenix based Iron Boy Promotions was poised yet again to deliver an evening of competitive and thrilling bouts that featured a bevy of young fighters from local MMA gyms such as Fight Ready MMA, Driven Boxing & MMA, and Notorious Fight Sports. The card this evening boasted eight bouts in both the amateur and professional ranks with the main event pitting Tyler Cole against Kasey Tanner in a 155 lb clash.

The opening contest of the evening featured two men making their debuts, Edward Rang who hailed from the Marshall Islands and Swar Boatthoughthugal from Phoenix. Rang displayed lightning quickness from the onset of round one and quickly attempted to take Swar to the ground. Swar displayed great poise in his debut and was able to quickly take advantage and lock in a rear naked choke for the victory.

Arizona’s Jontae McCowan came out quickly in the opening round with his game plan clearly in mind as he wasted no time cinching in a rear naked choke to claim victory in his debut.

Blass Gutierrez vs. An Ho
Three Rounds, 125 lbs
Decision: An Ho via KO in round 2.

Fight Ready MMA’s An Ho came out in round one displaying some apt striking ability and appeared poised to claim a first round stoppage as he gained the advantage with some mounted strikes, however, Gutierrez escaped and managed to survive the round. Round two saw more of Ho’s striking ability displayed as he quickly drew blood from the nose of Gutierrez. It became apparent that Gutierrez was struggling to breathe through his nose as An Ho took advantage of the fatiguing fighter and struck him with a devastating roundhouse kick square in the face that dropped him straight to the canvas.

Much to my surprise, this fight featured a fighter from my home state, as Wildwood, New Jersey’s Aiden Ingram competed against Chandler, Arizona’s Stephen Esparza-Owens. After a quick flurry of wildly thrown strikes by each fighter to open the bout, round one was rather uneventful as the only takedown, by Owens, was not capitalized upon. Round two saw Esparza-Owens make better use of an early takedown as he was able to control the majority of the round landing some solid strikes from the mounted position and avoided a near fatal error as he escaped a triangle choke attempt by Ingram. Ingram showed continued resilience and again managed to survive the round. In the third and final round, Esparza-Owens found himself on his back but again made the best of his positioning as he attempted to cinch in a triangle choke but again Ingram displayed a resounding will and was able to persevere leaving the decision in the hands of the judges.

Round one saw James Scott utilize his wrestling background to quickly take down Kemoy Anderson, however, Anderson used his speed to turn the tables leaving Scott defending himself from the guard position for the majority of the round. Round two again saw Scott score a quick takedown only to allow Anderson to slip out when Scott attempted to go for the ground and pound. Anderson then controlled the remainder of the round with Scott defending from the guard and sustaining a few solid shots. Round three ended quickly as Scott was a bit overzealous with his takedown of Anderson as he again attempted to land strikes on his opponent. Anderson found the opening he needed this time as he was able to apply a triangle choke for the submission victory.

It was clear from the start of this contest that these two combatants had no interest in doing anything but trading strikes with one another and that it probably was going to make it an easy night for the judges. Ulibarri was able to land a solid right that staggered Suarez enough that he was able to pounce on him and landed vicious blows until the referee needed to wrestle him off of Suarez.

In the co-main event of the evening, Deran Martinez became the first fighter representing the Gila River Indian Community for Iron Boy Promotions as he went toe to toe with Ryan Taylor in a clash of heavyweights. Martinez scored a quick takedown on a well placed kick to Taylor’s ankle and wasted no time pouncing on him. Martinez maintained control of Taylor’s head as the two men rose to their feet and proceeded to wrench on his head forcing Taylor to tap out solidifying the submission victory by standing guillotine choke. Another note of significance in this fight was in the history of Iron Boy MMA, this was the first bout to end with a standing guillotine.

In the main event, Roswell, New Mexico’s Tyler Cole made his professional debut and probably wished he had been abducted by aliens after the pounding he sustained in round one. Cole remained on his back the entire round and sustained countless straight rights and elbows to the face that left him a blood soaked mess. Round two displayed much of the same as Tanner overwhelmed Cole with another barrage of damage-inducing strikes before he closed the round trapping Cole in a rear mount position. Just after the signal of 10 seconds remaining resonated throughout Celebrity Theatre, Tanner finally put Cole out of his misery as he succumbed to a rear naked choke. I will give credit to Cole however – he had a significant reach disadvantage, sustained a mauling, and refused to tap out as he was put to sleep to end the fight showing the propensity to fight with the heart of a champion. 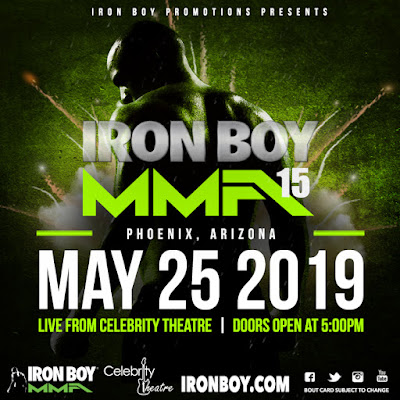