Arguably one of the greatest flyweights to ever lace up gloves, Pancho Villa (Francisco Guilledo) is known as a real balanced fighter, originating from the Philippines. Villa was the 110 lb version of a classic Smokin' Joe, or an old-school Jack Dempsey with less KO power. Boxing's first "Asian star to make a name within America," Villa, had tremendous heart and practically unrivaled respect for the sport of boxing which makes him a significantly likable boxer.

The honor and pride he carried into the ring was nothing short of admirable, on top of his performances in the ring. Weary if his opponents were about to fall, Villa would even go to his own or neutral corner once he had his opponent on the canvas. This fact is interesting, because it was not an official rule in the early 1900s. You could stand anywhere in the ring after a knockdown occurred during this era of pugilism. The game-plan and style was pressure, yet Villa knew how to back up and utilize generalship when needed.

The notable, yet critiqued fights here, are with legends Jimmy Wilde and Jimmy McLarnin.

The Wilde fight would be Pancho's "greatest" critiqued KO victory, as Jimmy decided to take another tough fight, after a dramatic loss to Pete Herman. Wilde had close to a two year layoff, which was out of the norm for his taste, but decided to take the fight out of confidence, as well as to [please his fans. Jimmy had huge heart like Pancho and was a well known legend in the ring, yet this fight proved to be too much, as well as his last. Pancho would batter him almost as bad as Herman and ended up dropping Wilde in the seventh round.

McLarnin - Villa is filled with conspiracy, due to Pancho's wife releasing a certain statement decades later. Before the fight, Villa had an infected tooth extracted the morning before his match with Jimmy McLarnin. Villa entered the ring with a badly swollen jaw to face McLarnin, and despite this, Villa survived a bad beating and lost on points. The conspiracy began months after this fight, when he had several more teeth pulled from the same infection. Blood poisoning caused Pancho to cancel his last fight, and sadly, he passed from the disease.

Pancho's wife gave birth to their son right after his passing, and she stated his death was caused by an intentional overdose of anesthesia. She insinuated that this was the result of a gambling conspiracy to murder Villa for losing to McLarnin, as Villa was highly favored to win the fight.

A Closer Look at Pancho Villa: 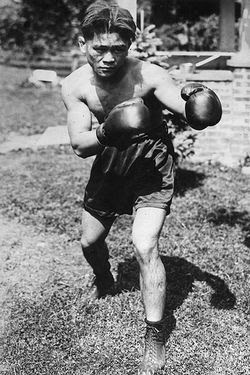