Now that the dust has settled from Wrestlemania, it’s time for what has become one of the biggest pay per views of the year (aside from the “Big 4”) as it has dictated the landscape of WWE year after year. This year’s installment of Money In The Bank emanated from the back yard of WWE Headquaters at the XL Center in Hartford, CT. Six titles were scheduled to be contested on the card that also boasted two massive Money In The Bank Ladder Matches and a steel cage match between The Miz and Shane McMahon. One factor to take into consideration heading into this event, was whether WWE would push the envelope with their PG rating and pedestrian booking due to the ever increasing pressure being put on by AEW who will present their debut pay per view, Double Or Nothing, next Saturday in Las Vegas.

Women’s Money In The Bank Ladder Match
Naomi vs. Carmella vs. Nikki Cross vs. Mandy Rose vs. Ember Moon vs. Dana Brooke vs. Natalya vs. Bayley
Winner: Bayley

My only real gripe with this match was that it did not feature Alexa Bliss, other than that it was quite entertaining and a great opener to the main card. Towards the conclusion of the match, it appeared that Sonya Deville was going to hand the victory to her running mate Mandy Rose after an impressive display of strength where she threw Rose into a fireman’s carry and scaled the ladder with her on her back. Just as the briefcase was at Rose’s fingertips, Bayley emerged from nowhere to race up the ladder and shove the women off of the ladder leaving her unopposed to retrieve the Money In The Bank contract.

This match presented an opportunity for Rey Mysterio to seek redemption after he was embarrassed by The Samoan Submission Machine at Wrestlemania with a submission loss in barely a minute. Well Rey certainly gained retribution as he countered a power bomb attempt by Joe and rolled him into a pin to steal the title on a missed call by the ref as Joe’s shoulder was off the mat.

In another Wrestlemania rematch, The Miz sought retribution for his Falls Count Anywhere loss to Shane last month…this time however, it was going to be settled in the carnal confines of a steel cage. After a grueling contest, Shane-o-Mac won in quite entertaining fashion. With Shane McMahon hanging on from the top of the cage on the outside and The Miz attempting to pull him back in from the inside, McMahon slipped out of his shirt to drop to the floor for the victory.

“The Premier Athlete” Tony Nese made the second defense, first on pay per view, of the title he won from longtime champ Buddy Murphy at Wrestlemania. In a match that the crowd was just not into unfortunately, Tony Nese put his athleticism on full display, including execution of a 450 splash, on his way to retaining the Cruiserweight title.

In the first of two title defenses scheduled for “Becky Two Belts” on the evening, The Man squared off with Lacey Evans. Lacey Evans put on a strong showing in her first pay per view singles match as she took Becky to the limit. In the end, Becky reversed a pinfall attempt by the Southern Belle into the Disarmer for the submission victory.

As Becky started to leave for the locker rooms, she was intercepted on the ramp by Charlotte Flair.

As it appeared that Becky would overcome adversity and retain both of her titles, Lacey Evans returned to ringside and delivered a Woman’s Right to The Man while the referee was engaged in a ten count directed towards Charlotte who was outside the ring. Charlotte then returned to the ring and delivered a big boot to Becky to regain the Smackdown Women’s Championship.

After the match, Flair and Evans proceeded to lay waste to Becky until the new Miss Money in the Bank, Bayley, came to the rescue. After Bayley subdued Charlotte, she immediately cashed in her briefcase, ascended to the top turnbuckle and landed an elbow drop to become the new Smackdown Women’s Champion!

Elias shattered a guitar over Roman’s back as he made his way through the backstage area seemingly taking him out of the match. After Elias proceeded to insult the city of Hartford he was greeted with a Superman Punch on his way out. Roman then tossed Elias back into the ring and as soon as the referee called for the bell, Reigns speared Elias out of his boots for a laughably fast victory.

This match was a bit of a snoozer until A.J. Styles stepped it up a gear and executed a Styles Clash. Styles then attempted to seal the deal with a Phenomenal Forearm, however, Rollins caught him with a knee to the face that dropped him to his knees. Rollins then super kicked Styles and followed up with the Curb Stomp to retain his title.

Well this wasn’t exactly a match. Lars Sullivan made his way to the ring and left a pile of carnage without an opening bell ever ringing. Essentially, this was WWE exposing Lars Sullivan to a pay per view audience as he continues to lay waste to everyone in his path every week.

Kevin Owens baited Kofi into a title match after he posed as a member of the New Day for a couple weeks prior to turning his back on them during Kofi’s match with Shinsuke Nakamura a couple weeks ago. Kofi was able to withstand a Pop-Up Powerbomb and then turned the tables on Owens top rope senton attempt to land the Trouble in Paradise for the pinfall victory.

Men’s Money In The Bank Match
Baron Corbin vs. Finn Balor vs. Ricochet vs. Andrade vs. Mustafa Ali (now known as Ali) vs. Drew McIntyre vs. Randy Orton vs. ???
Winner: Brock Lesnar

Sami Zayn was supposed to be the eighth competitor in this match until Braun Strowman earned a small measure of payback after Zayn enlisted Corbin and McIntyre to help him “earn” the final spot in this match recently on RAW. Zayn who was found hanging upside down in the back earlier in the evening got a trip to the hospital while Strowman was banned from the building. The crowd was under the assumption that there would be a replacement but the opening bell rang with only seven competitors in the ring…that is until the ring had later transformed into a war zone. The shocker of the night occurred as it seemed that Ali was going to retrieve the briefcase until the unmistakable music of “The Beast” Brock Lesnar resonated through the arena! Lesnar made his way to the ring, disposed of Ali, and scaled the ladder to become Mr. Money In The Bank. 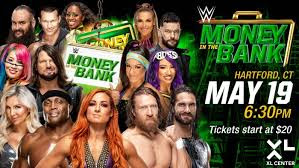