This Saturday night in Fairfax, VA , at the EagleBank Arena, Jarrett “Swift” Hurd of Washington D.C., returns home to defend his IBF and WBO Super Welterweight belts against Julian “J Rock” Williams. Entering the tiger’s lair of frenzied DMV (DC, Maryland, Virginia) fight fans, Williams appears to be Hurd’s toughest opponent to date. It has been two and a half years since Williams suffered the lone loss of his 28 fight career. That defeat came at the hands of then IBF Super Middleweight king Jermall Charlo via fifth round kayo. Over the course of his nine year career, Williams has established himself as a take-on-all comers boxer. Because of this, Williams has the best resume of any combatant that Hurd has faced. Born and bred in Philadelphia, which is two hour Amtrak train ride away from  Fairfax VA, Williams is a decided underdog. Being from one of the toughest fight scenes in the world, Williams effort will not be detoured by unfavorable odds and boisterous hometown supporters.

Even Philly’s most prolific boxing scribe Ken Hissner of Boxinginsider.com thinks the cards are stacked against  Williams saying, “I thought J Rock would win the first time he challenged for a title, but the Philly Jinx happened. J Rock isn’t beating Hurd."


Not at all overconfident, Hurd is not taking his challenger lightly and is still hashing out his strategy. “It’s hard to tell what type of fight it's going to be. I want to say he’s going to try to box and get through the twelve rounds.”

It is likely Hurd will employ his usual style of moving forward behind his jab, stepping aside and uncorking combinations. Eventually Hurd wears down his opponents due to his size and strength. Using these tactics Hurd gets to his opponents during the second half of contests.

Addressing the shoulder surgery that saw Hurd sit out for eight months in 2018 he said, “I feel strong and my shoulder is one hundred percent. During training, I forgot I even had surgery.” In hopes of a homecoming celebration,  Hurd said, “I’ve got the city behind me, and I couldn’t be happier about that.”  Meanwhile Williams has plans on ruining that party.

The match will air live nationally on prime time television on Saturday night with the Fox Network broadcasting it. 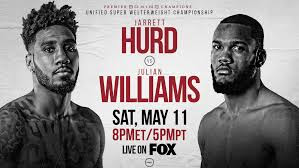