After a pro wrestling fan’s dream weekend with events such as Wrestlecon, The G1 Supercard, NXT Takeover New York, and the WWE Hall of Fame Ceremony (I’m still waiting for an actual building to be erected to enshrine these hall of famers), the day has arrived for the granddaddy of them all, the showcase of the immortals, Wrestlemania. This year 82,265 fans embarked upon MetLife Stadium, the home of the New York Giants, in East Rutherford, New Jersey and were treated to a marathon that clocked in at nearly seven and a half hours. One of the major questions posed by fans was how this show would play out with the undeniable pressure of the upstart AEW coming in the fall and the massive aforementioned G1 Supercard (a joint event by New Japan Pro Wrestling and Ring of Honor) that was held at Madison Square Garden, the “home” arena of WWE for decades. Aside from the competition posed by competitors, the card advertised leading up to the event was clearly devoid of WWE staples John Cena, The Rock, Hulk Hogan (after the drama that accompanied his return to the company), and the man who personifies Wrestle mania - The Undertaker.

Unfortunately the men of 205 Live were denied the respect they deserve as they opened the kickoff show in front of a half full MetLife Stadium. Long Island’s Tony Nese put on an outstanding performance as he withstood Murphy’s Law to execute a German Suplex that propelled Murphy into the turnbuckle and he followed it up with the Running Nese to earn the pinfall.

After Asuka unceremoniously dropped the Smackdown Women’s Championship two weeks ago, she was my favorite to win this until Sarah Logan eliminated her. The fans believed Sarah Logan won until Carmella emerged from outside the ring to super-kick her over the top rope for the victory.

The streak is over! Curt Hawkins’ 269 match losing streak ended as he rolled up Scott Dawson for the pinfall!

Saturday Night Live’s Michael Che and Colin Jost attempted to get the upper hand on the Monster Among Men as they emerged from beneath the ring after hiding there for the duration of the match. After Strowman eliminated both Hardy Boyz, Che attempted to eliminate himself by stepping over the top rope, but received a shot to the jaw to knock him off the ring apron. Braun then launched Colin Jost over the top rope into a collective of Superstars for the win.

Just when the WWE Universe didn’t think the show could kick off any better than with Alexa Bliss and Hulk Hogan, Paul Heyman stormed down to the ring and declared that his client refused to sit around all night if he wasn’t closing the show and wanted to get business done.

Seth Rollins solidified his position in a title match at The Showcase of the Immortals after he outlasted 30 other men to win this year’s Royal Rumble. It didn’t take Rollins long to declare that he would challenge The Beast for his Universal Championship. After Brock laid waste to Rollins for several minutes, Rollins shoved Brock into the ref and capitalized with a low blow. Rollins proceeded to execute three consecutive curb stomps to become the new Universal Champion.

Another surprising entry early on the card pitted The Phenomenal One against The Viper. AJ styles dodged an RKO attempt by Orton while he attempted a Phenomenal Forearm as he grabbed Orton by the back of the head and drove his throat down into the top rope. Styles then successfully landed his second Phenomenal Forearm attempt while Orton was stunned to solidify the pinfall victory.

After it appeared Ricochet and Black would win when The One and Only landed a magnificent 630 from the top rope, The Usos proved their resilience and landed dual top rope splashes from opposite corners on Nakamura and Sheamus to retain their titles.

This match came to fruition after The Miz and Shane-o-Mac came up short in their attempt to regain the Smackdown Tag Team Titles at Fastlane and Shane turned on Miz as he engaged in a vicious beat down of the A-lister in front of his father. This match exceeded my expectations as it spilled all over the stadium after The Miz’s father was beat down by Shane. Eventually the two men scaled a camera platform in the middle of the crowd after destroying the foreign commentary section. The Miz proceeded to superplex Shane off of the platform to a pile of mats and plywood about 15 feet down. The way they landed left Shane on top allowing referee Charles Robinson to make the three count.

It appeared that Natalya and Beth Phoenix had the titles won after Phoenix dropped Bayley on her face with a modified gut wrench, however, Billie Kay tagged Phoenix before she left the turnbuckle. As Phoenix pinned Bayley, the Iiconics threw her out of the ring and Kay pinned Bayley to win the titles.

After weeks of being run through the ringer by Mr. McMahon, Kofi’s counterparts Big E & Xavier Woods successfully ran the gauntlet on Smackdown Live to earn Kofi his title shot at Wrestlemania. Kofi seemed to be a man of destiny as he withstood several running knee strikes and submission attempts in the form of the LeBell lock. Kofi sealed the victory with the Trouble in Paradise to become the new WWE Champion.

Blink and you would have missed this match. Rey landed wrong on his ankle coming off the top turnbuckle allowing Joe to lock in the Coquina clutch for the quick submission victory.

This match marked Roman’s first singles match on pay per view since his return from a battle with leukemia. Roman’s opponent, the man once billed as Vince McMahon’s chosen one, Drew McIntyre. McIntyre dominated the majority of the contest until, in typical Roman Reigns fashion, Roman got “fired up” after being slapped and proceeded to hit the Superman Punch and The Spear in succession for the pinfall victory.

After the match, it was time for the Elias concert. Halfway through the concert, a strange video highlighting Babe Ruth played on the Titantron. At it’s conclusion, Thuganomics was displayed in conjunction with John Cena’s classic entrance theme. Cena came to the ring dressed like it was 2002, dissed Elias in classic fashion, and hit the F-U and Five Knuckle Shuffle to the loudest pop he’s received in 15 years.

Batista made his return to WWE several weeks back on RAW when he assaulted Ric Flair backstage during his 70th birthday celebration and proceeded to call Triple H out. The two proceeded to make their demands regarding the stipulations of the match. First, Triple H accepted the challenge but declared it would be contested under No Holds Barred rules. Then Batista countered and told Triple H he wanted him to put his in-ring career on the line - which Triple H aptly accepted. This match was absolute carnage. Broken announce tables, ring steps, pliers, and of course - sledgehammers. Just when it seemed Triple H’s career was in jeopardy after Batista kicked out of a Pedigree, Ric Flair emerged to pass him a sledgehammer. Triple H took down Batista with it, then utilized another Pedigree to seal the victory.

Much to the chagrin of the WWE Universe, Kurt Angle was scheduled to square off with Baron Corbin in what has been coined his farewell match. Kurt arrived in great shape, landed several German suplexes, The Angle Slam, and the ankle lock submission - none of which did the job. Angle then attempted a moonsault but, unfortunately, Corbin rolled out of the way and trapped Kurt in the Deep Six to defeat the only Olympic Gold Medalist in WWE history.

Initially “The Man” Becky Lynch earned her spot against Ronda Rousey by winning the Women’s Royal Rumble match, however, she was supplanted from the bout after being suspended by Mr. McMahon and replaced with Charlotte Flair. After Becky earned her way back into the match making it a triple threat contest, Charlotte shocked the WWE Universe by defeating Asuka for the Smackdown Women’s Championship a couple weeks ago on Smackdown Live making tonight’s bout a winner take all affair. All of these ladies put on performances worthy of walking out with the titles but it was The Man’s night. With Charlotte laid out on the floor, Ronda Rousey hoisted Becky up for the Piper’s Pit and as she dropped her to the canvas, The Man rolled Rousey onto her shoulders to claim the pinfall victory. 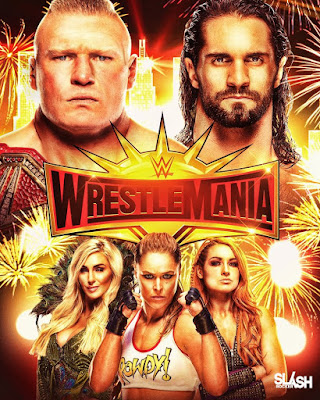