The marquee weekend of the year for professional wrestling kicked off this evening as NXT Takeover New York emanated from the bustling mecca of Brooklyn sports - The Barclays Center. The highly anticipated five match card featured all of the NXT titles, in addition to the NXT UK Title, contested and was highlighted by Adam Cole vs. Johnny Gargano for the vacant NXT Title.

The explosive night of action kicked off with War Raiders (I still find myself wanting to call them War Machine but I digress) defending their tag team championship against the winners of the 2019 Dusty Rhodes Tag Team Classic - Aleister Black and Ricochet. Many labeled this bout a clash of styles but these two teams rapidly proved all who bared witness to be utterly wrong. Not only did Ricochet impress the crowd with a testament to his strength conditioning as he perfectly executed a Scott Hall-esque fall away slam on Hanson but Hanson later drove the WWE Universe to a fever pitch as he launched himself from the top turnbuckle to the outside where he laid waste to all of the other competitors with a cannonball splash. This match reached it’s conclusion as War Raiders obliterated Ricochet with a barrage of devastating tandem offense as they first connected on Thor’s Hammer and followed it up with Fallout (a guillotine leg drop delivered by Hanson from the top turnbuckle while Rowe held Ricochet) to get the 1-2-3 and retain their titles.

This contest pitted Velveteen Dream in his first defense of the North American Championship since supplanting Johnny Gargano as champ against former UFC star “The Original Bro” Matt Riddle. After the bout commenced with Velveteen Dream attempting to rattle the cage of Riddle with his antics and a stomp to his bare foot, The Original Bro proceeded to display a proficient ring IQ as he attempted to break down the champ with a fusion of wrestling and MMA tactics. Dream was able to bring himself back into the match, however, with a Hulk Hogan big boot, a Fameasser, and a Codebreaker. Late in the match, Dream averted certain disaster again as he survived another onslaught of offense from Riddle. First, Riddle stood on the middle rope and German suplexed Dream back into the ring, then he scaled to the top turnbuckle and beautifully landed The Floating Bro (a moonsault that twists into a senton), and lastly cinched in The Bromission. Just moments before the capacity crowd thought a submission was imminent, Velveteen Dream rolled over with the hold still locked in and was able to pin Riddle’s shoulders down for the pinfall.

At first glance, the lumbering Walter (yes, that’s his entire ring name) from Vienna, Austria is reminiscent of how one might imagine a Gestapo version of Lenny from the classic, and fixture of many high school reading lists, Of Mice and Men. All jokes aside, the undefeated 6’4” sports entertainer proved to be The Bruiserweight’s most imposing threat to date for his 685 day title reign. Walter dictated the course of the action for the majority of the match by imposing his size and strength on Pete Dunne. While Dunne put forth a spirited defense loaded with several applications of his signature joint manipulation and utilization of his speed advantage, The Ring General was just too much in the end. After a vicious big boot to the jaw of Dunne turned the tides of his late push, Walter then power bombed the defending champ from the top rope and as if that wasn’t enough, he ascended to the top rope and came down with a near 300 lb splash which proved to be the final nail in the coffin of Dunne’s title reign.

After imposing her will on the NXT Women’s division with her Horsewomen cohorts for several weeks and ruining efforts to crown a number one contender, Commissioner William Regal declared that the Queen of Spades would defend her title in a fatal 4-way match. The ladies kept the action at a frenetic pace throughout this contest. Without the other Horsewomen at ringside, Baszler withstood Belair’s KOD, Kairi Sane’s Insane Elbow, and a moonsault from Io Shirai as it seemed her reign of dominance was about to end. After Bianca Belair hoisted both Shirai and Sane on her shoulders and dropped them with a brutal KOD, Baszler came from out of nowhere to trap Belair in the Kirifuda Clutch for the submission victory.

The NXT Championship was originally set to be defended by Tommaso Ciampa against Johnny Gargano until neck surgery unfortunately put him on the shelf and required him to relinquish his title. Adam Cole earned his spot in the match after he survived a brutal fatal 5-way match against Velveteen Dream, Matt Riddle, Aleister Black, and Ricochet a couple weeks ago on NXT TV. With one fall separating Johnny Gargano from leaving New York with the NXT Championship, the entire Barclays Center rose to their feet generating an electricity fitting of this title bout. The end of the match did not arrive without one more feat of adversity for Gargano to overcome as the other three members of the Undisputed Era attempted to push Adam Cole to his first NXT Championship. After Gargano overcame the trio of Fish, Strong, and O’Reilly, it appeared Adam Cole was still going to triumph as he measured a seated Gargano up for a kick to the back of his head. At the last second, Gargano ducked out of the way and trapped Cole in the Gargano Escape for the submission victory. 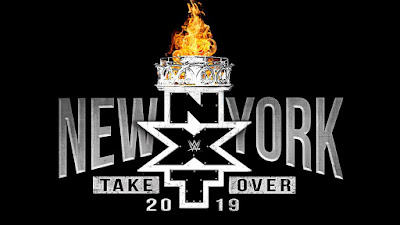