Impact Wrestling returned to pay per view this evening with Rebellion as they emanated from the Rebel Entertainment Complex in Toronto-Ontario, Canada. The card featured four titles contested amongst the eight matches on the card. While this was an excellent show, there were some notable omissions from the card as Eli Drake, Rosemary, Su Yung, Killer Kross, and Willie Mack found themselves without a match and unfortunately, based on the timing of his new contract signing, Rob Van Dam will not appear for the company until their TV tapings this coming weekend at the legendary 2300 Arena in Philadelphia - of course this is the birthplace of extreme, the former ECW Arena.


The opening contest of the card was an X-Division contest that would help sort out the landscape of the crowded division to help determine who may be in line for a future title shot. The match came to a quick conclusion after Petey Williams first executed the Canadian Destroyer on the much larger Cousin Jake only to have Ace Austin emerge from outside of the ring to unceremoniously roll up Petey with a handful of tights for the pinfall.


Announced earlier in the day, the fans in attendance were treated to a rare inter-gender match between “The Smoke Show” Scarlett Bordeaux and Desi Hit Squad member Rohit Raju. Also of note, I was happy to see fan favorite and New Jersey’s own Fallah Bahh accompany Bordeaux to the ring despite not getting involved in the match. Bordeaux displayed outstanding ring presence and strength as she executed a German Suplex on Raju and finished him off with a modified Gringo Killer for the pinfall.

Moose recruited Josh Alexander and Ethan Page, collectively known as The North (which went over in a huge way in Canada), to exact revenge against The Rascalz after he was embarrassed by the trio on Impact. While The Rascalz did put on a good showing with a plethora of aerial maneuvers, the power of The North and Moose could not be overcome. The match reached it’s conclusion after The North propelled Dez at Moose as he speared him to set up the pinfall.

Jordynne Grace earned this title shot after she defeated the returning Madison Rayne recently on Impact and came in ready to go. Grace controlled the tempo early as she took the fight to Taya on the outside of the ring and displayed her impressive strength with a powerbomb that propelled Valkyrie’s back into the edge of the ring apron. It appeared Grace would win her first title after executing a Muscle Buster but Taya was able to neutralize Grace’s strength game as she continued to work on her arm and eventually found her window to land the Road to Valhalla to retain her title.

Per the request of Sami Callihan, this match was contested under OVE rules - which essentially meant this was a hardcore match. It didn’t take long for the ring to become littered with chairs, a staple gun, a wet floor sign, and a cookie sheet, all of which became instruments of carnage sooner than later. Just one of the many highlights of this contest came after thousands of Legos, yes Legos, were dumped onto the ring canvas. First, Swann was able to drop Callihan onto the Lego blocks with a perfectly executed hurricanrana only to have Callihan regain the upper hand with a piledriver off the top turnbuckle that drove Swann’s head into the blocks. The conclusion of the match came after Swann was able to wrestle a baseball bat wrapped in barbed wire from Callihan and raked it across his face in a modified crossface for the submission victory.


After Gail Kim cost Blanchard the Knockouts title at Homecoming, she went on a crusade to cost Kim her job in Impact Management. After the Impact Hall of Famer tendered her resignation, Gail Kim came out of retirement to challenge Blanchard this evening. Gail Kim certainly looked like she was in phenomenal shape with minimal ring rust as she took Tessa to the limit. Tessa was able to withstand a figure four leg lock with her leg twisted around the ring post, as well as, Eat Defeat to conquer Gail with a new submission she unleashed that resembled a modified LeBell Lock.

After Cage was “screwed” out of his title opportunities at Homecoming, as a result of ringside interference by Impact’s buddies from his Survivor appearance, and recently on Impact, as a result of senior official Johnny Bravo being in the pocket of the defending champ. In an attempt to even the playing ground, the legendary Lance Storm was inserted as the special guest referee. It appeared Impact was going to retain his title after he took out Lance Storm and Johnny Bravo unveiled a referee shirt under his jacket, however, Impact wasn’t able to secure the pinfall after he dropped The Machine with the title. After Cage disposed of Bravo, he executed The Drillclaw as Storm counted the 1-2-3. Cage’s celebration as new champ was short lived as the crowd was shocked with the debut of Michael Elgin! Elgin, who most recently performed for New Japan Pro Wrestling, got in the face of Cage, delivered a brutal backhand that staggered him, and hoisted him up for a spinning sit down powerbomb.


This bout marked the return match for LAX after they recently dropped their tag team titles to The Lucha Bros. It appeared that The Lucha Bros were going to walk away with their titles for the majority of this bout as they landed punishing move after punishing move. One of the many highlights in this match occurred after a table was staged on the entrance ramp just outside the ring with a ladder propped up just inside the ring ropes. Ortiz scaled the ladder, however, Pentagon Jr. ran along the top rope from the corner to meet Ortiz at the top of the ladder and launched him through the table with a beautifully executed Spanish Fly. The conclusion of this match arrived with Santana and Pentagon Jr. battling at the top of a ladder in the center of the ring with a table covered in tacks set-up just below the man with no fear. Ortiz made his way into the ring and positioned himself to attempt a powerbomb of Pentagon Jr. but he held firmly to the ladder…that is until Santana stabbed him in the forehead with a fork several times. This allowed Ortiz to powerbomb Pentagon through the table as his body sickeningly buckled in half. Ortiz covered him for the pinfall to crown new Impact World Tag Team Champions! 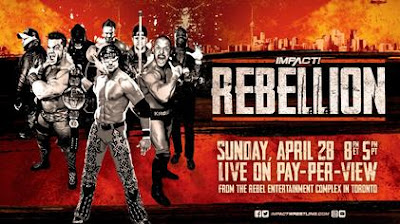