With all the live streaming of boxing on DAZN, ESPN+ amongst others, and big money TV deals with Showtime, Fox, and ESPN, a fan has no reason to leave their home to attend a fight card. Small club shows are the heart pumping blood into the sports veins.

New Jersey’s most prolific promoter, the LaManna family's Rising Star Promotions in conjunction with Nedal Promotions kept this tradition alive by serving up a six bout card just across the Delaware River at the Pennsbury Racquet and Athletic Club in Morrisville PA. Renee Aikens did a good job, handling the matchmaking duties.

Three Trenton based pugilists made there pro debuts, and Trentonite Elijah Morales stayed undefeated at 3-0. Morales,146.75 lbs, had to work hard to earn a four round unanimous decision against Steve Moore of Orange, NJ. Possessing a 1-7 record entering the contest, Moore shocked a large throng of Morales supporters on hand when a right hand to the chin put their charge derrieres on the bottom strand. Referee Eric Dahli correctly ruled it a knock down. Arising to his feet, Morales still had a buzz on when the action continued. By rounds end, Morales head was clear and he was in control from that point on, until the end of the contest. Putting forth a game effort, Moore landed wild shots. Building up steam and bull rushing forward every chance he had, Moore’s effort made it a enjoyable scrap.

A staple of the Trenton fight scene for over seventy years Mugsy Episcopo seconded the corner of debuting cruiserweight  Jacob Sowirko, Trenton NJ, in a non-action four round draw against Washington, D.C. native Charles Johnson. The soul was willing but the body was not, as neither man had any skill.

Episcopo handled the careers of such fighters as Bryant Brannon and Kenny Bogner, amongst others. Back in the day, “Mugsy” was the go-to-guy in “The Burg” (Trenton’s Chambersburg Section). At that time, being the guy in “the Burg” was a distinguished honor.

Philly lightweight Nahir Albright had his hands full fending off Tyrome Jones of South Bend, Indiana. Throughout the scrap, Albright,134.5 lbs., would stun Jones, 133.5 lbs., and then unload on him. Once out of harm's way, Jones used his jab to stay at bay and score occasional combinations. A little bit worn out by his high punch rate, Jones forfeited the fifth round  when the game Jones kept trudging forward. A lively sixth round of action completed this enjoyable to watch scuffle. Judges scored it all in Albright's favor 59-55 and 60-54 twice. Albright's record rises to 7-1 (2 KO’s), while Jones' drops below .500 at 4-5-1 (1 KO).

Promoter Thomas LaManna almost scored a bout versus former welterweight world champion Kell Brook on the undercard of heavyweight champion Anthony Joshua vs Andy Ruiz, Jr. title defense at Madison Square Garden on June 1st. Matchroom USA matchmaker Eric Bottjer tried to make the match but Brook was just not interested in facing LaManna. Also, LaManna may get a crack at WBO Super Welterweight champ Jamie Munguia. Currently LaManna is ranked twelfth by that sanctioning body. Meanwhile LaManna stays active taking on a opponent to be announced on a Rising Star promoted event in Norfolk, VA on May 18th. 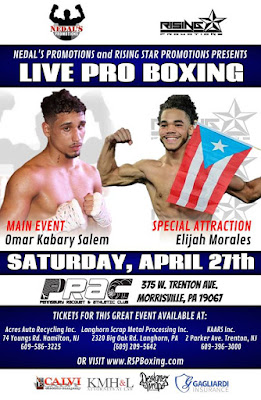