ESPN hosted a huge night of combat sports from the city of Brotherly Love, Philadelphia, PA this past Saturday night.  With the city a buzz with the break out start of the Philadelphia Phillies and their new $330 million-man Bryce Harper, along with the impending play off run by the Sixers, the city was ready to host a great night of action both inside the octagon and the squared circle.  Top Rank Promotions invaded Philadelphia to provide the night's boxing action as they featured a card topped by the first defense of WBC Light Heavyweight Champion Oleksandr Gvozdyk (17-0, 14 Kos).  The card also featured  a fight that was supposed to be a welterweight showcase for Egidijus Kavaliauskas (21-0-1, 17 Kos), who is being groomed to be a challenger for WBO champion Terrance Crawford.

A host of undercard action also took place (which we will get to later), but a few things became clear while watching the fights ringside.  These sentiments about the nights action were verified once this writer was able to finally watch the televised broadcast.  The first thing that was verified was something that I’ve had a sneaking suspicion about for some time.  That is that for all the hype (and rightly so), surrounding Eastern European fighters due to their extensive amateur pedigrees, outside of Vasyl Lomachenko, most of these Eastern European fighters tend to have trouble when they face fighters that can fight on angles.  They tend to also have problems with fighters that can fight on the inside and match their strength and aggressive nature.  It was something first noticed during the Andre Ward – Sergey Kovalev fights and was confirmed on Saturday night.

While fighters from this part of the world (Eastern Europe) tend to be fantastic from a fundamental standpoint, many have issues with the types of things that are taught in gyms in Latin America and the United States.  I’m talking about the type of boxing that is predicated on defense by using both the upper body and legs to avoid punches.  Counter-punching boxers that know how to set traps with their small footwork, as well as fighters that know how to avoid pressure and take away their opponents’ aggression and one-two power punching style.

Some of these points were on display during the main event.  With Gvozdyk defending his crown against the game Doudou Ngumbu (38-9, 14 Kos), a fight that wound up having a bizarre ending when the contest was stopped due to a leg injury in the fifth round.  Up until the point of Ngumbu not being able to finish, the fight and thus losing by technical stoppage, he was having some success against the power punching Gvozdyk.  His constant movement and attack, which consisted of him jumping in and out of range to try and land a punch or two before getting out of range seemed to have the champion a bit frustrated.

Gvozdyk was beginning to come on and started to land some thudding straight body shots that clearly caused Ngumbu some issues.  It seemed that the tide of the fight was going to start to turn in the favor of the champion, who wasn’t being held at bay by Ngumbu as the fight was starting to near the middle rounds.  Ngumbu couldn’t land anything that made Gvozdyk think twice about charging forward towards his prey.  As a result, the ending that seemed to occur happened a bit prematurely but was most likely going to be the way the fight would have ended regardless, with Gvozdyk winning by stoppage.

It’s a shame to see Ngumbu's opportunity at championship glory and financial stability for his family come to an end the way it did, but so is the nature of the beast that is boxing.  Gvozdyk will continue forward and will stake claims as both the WBC and Lineal Light Heavyweight Champion of the World.  With a large amount of talent invading the division along with the current champions, nothing is clear as to who the best light heavyweight in the world.  Gvozdyk will be competitive against any of the other champions or challengers, which will make watching this division clear itself out over the next couple of years a fun thing to witness.  One fighter of note that was in the ring after the fight was former super middleweight contender and Philadelphia native Jesse Hart.  Hart has told TWI on several occasions that he is also thinking about moving up to light heavyweight to fight the big names.

In the opening bout of the telecast and the co-feature, Kavaliauskas was matched against Philadelphia native and veteran welterweight Ray Robinson (24-3-1, 12 Kos).  It was supposed to be a test for Kavaliauskas to see how he would fair against a southpaw that could box and that can do the things mentioned above.  What the fans in attendance and watching from home saw was yet another example of that style being an Achilles heel to Eastern European aggression.  Robinson was able to use his jab and move on angles creating traps that Kavaliauskas seemed to always walk into.  Once Robinson had Kavaliauskas where he wanted, he was able to land lefts to the body or use a check right hook that allowed him to get out of the way from any power counter shots.

Kavaliauskas looked confused and frustrated that he couldn’t come forward and cut off the ring on the taller and lengthier Robinson.  He did have his fair share of moments in the fight and landed some good clean punches that allowed him to win some of the rounds when Robinson was not being active enough to win the round based off of his boxing.  These times and lapses of activity from Robinson allowed for some of the close rounds to be awarded to Kavaliauskas based solely on his aggression.  After the ten rounds, one of the judges scored the fight 97-93 in favor of Robinson, while the other two scored the fight even at 95-95.  For the record TWI scored the fight 96-94 in favor of Robinson.

While neither fighter was satisfied with the outcome,  Robinson rightly denied answering a question in the post-fight interview geared towards trying to prop Kavaliauskas as a possible opponent for Crawford by stating he deserves that fight.  It was a clear indication that Kavaliauskas may not be ready for that type of challenge and has lots of things to work on if he is going to challenge the best fighter in the world.  As for Robinson, the best thing going for him after he wasn’t awarded this victory is the fact that he is available to fight any of the top names at welterweight.  At the age of 33, hopefully he is not penalized for putting forth a game effort and is able to get his chance at glory before it is too late.

Several fights on the undercard were of note:

In an IBF welterweight title eliminator, Kudratillo Abdukakhorov (16-0, 9 Kos) defeated Keita Obara (20-4-1, 18 Kos) by unanimous decision.  With his victory, he is now in line to face IBF welterweight king Errol Spence Jr.  While Kudratillo was effective with his pressure and landed the power shots against Obara to become the mandatory challenger, once again his style doesn’t seem like it would fair well against the much more polished professional Spence.  It’s likely that he will wait for his moment of championship glory when Spence vacates the IBF title to face bigger named opposition for bigger pay checks.

Philadelphia heavyweight prospect Sonny Conto (2-0, 2 Kos) notched his second victory with a first round stoppage.  Conto looks solid and his punches are serious, he is still getting his feet under him as a professional and will continue to be showcased around the country by his handlers at Top Rank before the level of competition increases.  Next up for him is a trip to Las Vegas to fight on the undercard of Tyson Fury’s fight in June.

Reading native Joshafat Ortiz (6-0, 4 KOs) once again looked impressive with a first-round stoppage over James Thomas (6-5, 6 Kos).  He blasted Thomas with a powerful right that hurt him, and continued to mug Thomas with power shots before the fight was stopped.

Newly signed to Top Rank, welterweight contender Fredrick Lawson (27-2, 21 Kos) was stunned and stopped by Juan Ruiz (22-4, 14 Kos) in the fourth round at the 1:17 mark.  Lawson had an opportunity to make a statement and claim his place as a legitimate contender at the world class level, but he was out gunned by the determination of Ruiz.

Philadelphia super featherweight Donald Smith (9-0, 6 KOs) was impressive with his fourth round one punch knockout of Jose Martinez (11-18, 6 KOs).  Smith was stunned in the first round when he was gunning for the early knockout.  He wisely adjusted his game plan and started to box and set up his shots.  In the fourth, he set a trap that Martinez walked straight into and blasted him with a powerful straight left that knocked Martinez out cold.

Jeremy Adorno (1-0) won a four round unanimous decision over Sebastian Baltazar (1-4).  Adorno faced live competition in his first fight as Baltazar came to Philadelphia to win.  Adorno was cracked by Baltazar on several occasions, but showed a good chin for an 18 year old and stormed back with power shots of his own to take the decision. 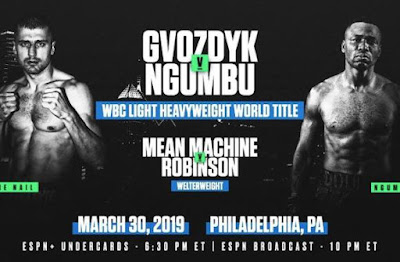