Hranoush Sidky Bey, known as Madame Bey, ran a successful boxing camp in Chatham that was frequented by the legendary fighters of her day.

Commonly known as Madame Bey, she came to the United States at the age of 16 with her future husband, Mehmed, a Turkish diplomat. Prior to becoming an important figure in professional boxing circles, Bey was already a "Renaissance woman." She was well-educated, spoke seven languages, sang opera, and was a fixture in the Washington, D.C. social scene. It was in Washington, D.C. that she and her husband became friends with President William McKinley. She was just a few feet away from McKinley when he was assassinated in Buffalo in 1901.

Since publishing his book, Pantalone has been a vocal advocate for honoring Madame Bey's contributions to the boxing world. His research, writing and talks have made him a "go to guy" for all things Madame Bey, and his efforts have brought her contributions to the history of boxing back to the forefront of the sports world.

"Imagine, a woman in the 1920s, just 3 years after the 19th amendment gave women the right to vote in the US, running a successful business in a man’s world in a sport thought of as only men could be involved in. Throughout its existence, the camp saw no fewer than 14 world heavyweight boxing champions and 80 hall-of-famers. It was the most famous boxing camp at the time. It is a feat that would be hard to duplicate even in today’s world," Pantalone told Patch.

While researching his book, Pantalone, a resident of New Providence, discovered that Madame Bey and her husband were laid to rest in nearby Fair Mount Cemetery without a grave marker. Soon after making this discovery, Pantalone and the Chatham Township Historical Society became actively involved with Bey's descendants, local historians and the Turkish Consulate General to raise funds and plan for the placement of a tombstone for Madame Bey and her husband. The project to place a tombstone over the previously unmarked grave was completed on September 20, 2020.

Madame Bey was also honored earlier this year by the New Jersey Boxing Hall of Fame when she was selected to be inducted into the hall of fame with the class of 2020. Unfortunately, this year's induction ceremony and banquet was postponed until November of 2021 due to restrictions associated with the COVID-19 pandemic.

When asked what Madame Bey means to the history of boxing, New Jersey Boxing Hall of Fame president Henry Hascup said, "Madame Bey's induction into the New Jersey Boxing Hall of Fame is long overdue! Here's a lady who knew nothing about boxing, and then went on to build one of the top boxing camps in the history of the sport. There were times when there were ONLY eight recognized World Champions, and she had over half of them training at her camp." 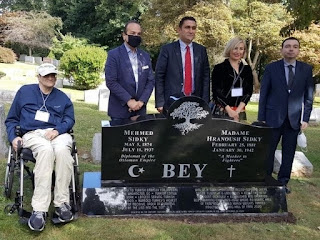