All Elite Wrestling returned to pay per view this evening as Full Gear emanated from Daily’s Place in Jacksonville, Florida. As has been the case for the past couple months, AEW continued to make WWE look bad as they allowed a limited number of fans to attend - whereas WWE continues with their dystopian virtual fans. Aside from the impressive card for this evening’s event where five titles were defended, rumors have also run rampant as of late that “The Villain” Marty Scurll and/or the legendary Sting could make their presence known. This is yet another reason why AEW has continued to build momentum - they have successfully maintained a strong blend of veteran stars while still developing younger talent all while treating fans to the element of surprise, something that is quite difficult today with everything spoiled on social media.

Following Serena Deeb’s shocking victory over Thunder Rosa in a non-televised event a couple weeks ago, AEW again elected to have the NWA Women’s Title showcased on pay per view. Deeb’s challenger this evening was former Impact Wrestling Women’s Champion and recent NWA star Allysin Kay (formerly known as Sienna). It was noted by the commentators that Kay recently parted ways with the NWA hence providing her with a strong platform to put her in place for a potential signing with AEW. Kay put forth a solid showing in this contest, however, Deeb was able to cinch in the Serenity Lock allowing her to walk away with the submission victory.

Following the match, former champion Thunder Rosa made her way to the ring for a face to face with Deeb as one would expect an eventual rematch between the two.

As was expected when the bracket was released for this tournament with these competitors on opposite sides, they made their way through the field of eight to face one another in the finals. The stakes were high in this contest as the one to emerge victorious between the former co-tag team champions would earn a future world title opportunity. In a phenomenal opening match to the main card, Adam Page gave Kenny Omega everything he could handle. As the match approached it’s conclusion, Page hit the Deadeye and then attempted the Buckshot Lariat. Unable to connect on the Buckshot proved to be his fatal flaw as Omega countered with the One Winged Angel to seal the victory.

In what has become a newly budding rivalry the past couple weeks, “Freshly Squeezed” Orange Cassidy was pitted against John Silver of Brodie Lee’s Dark Order faction in a huge spot on pay per view for #4. John Silver put on what was quite possibly his best match in his AEW career but it wasn’t enough as Cassidy finished him off with the Orange Punch and Beach Blast to earn the pinfall victory.

These two men met each other this evening for the fourth time with Cody prevailing in each of their previous three encounters. This time was different, however, as it was for Cody’s newly regained TNT Championship. Cody also hoped to not only retain his title but also silence Allin’s claims that he could never be the face of TNT. Prior to the beginning of the match there were two significant occurrences. First, Mike Chioda was introduced as the referee - making his second appearance for AEW since falling victim to WWE’s budget cuts in April (despite being with them since the late ‘80s). Second, Cody was finally able to be introduced as Cody Rhodes as WWE finally dropped their trademark on his name. Cody absolutely dominated this bout, however, he was unable to put away the relentless Allin. Rhodes allowed Darby to hang around too long and it ended up costing him in the end. The final moments of the match saw a series of back and forth rollup pin attempts that finally saw Allin shock the fans in attendance and win the title.

Following the match, Rhodes presentation of the title to Allin was interrupted by Taz. As Taz belittled Rhodes and Allin, Brian Cage and Ricky Starks of Team Taz ambushed them from behind and laid waste to the men until Will Hobbs came to their rescue with a steel chair in tow.

These two women finally met again this evening following Shida leaving victorious with Rose’s title in a no holds barred match months ago. Hikaru Shida put forth an impressive display against The Native Beast. After overcoming a kendo stick strike to the knee at the hands of Vickie Guerrero early on, Shida demonstrated exceptional strength headlined by not one, but two, Falcon Arrows - one of the avalanche variety off the top turnbuckle. After executing the second Falcon Arrow, Shida finished off Rose with several knee strikes to the head.

FTR (c) vs. The Young Bucks

Winners: The Young Bucks via pinfall

The Young Bucks earned their shot this evening after prevailing in a four way dance with The Butcher and The Blade, The Lucha Bros, and Private Party on a recent edition of Dynamite. The Young Bucks, who have yet to taste championship gold in AEW, proclaimed they would never challenge for the titles again if they could not win this evening. Another substantial factor in this bout was the banning of Tully Blanchard from the corner of FTR as he often serves as a significant distraction, if nothing else. This match started slow but certainly didn’t end that way. In the closing moments, The Young Bucks overcame the Mindbreaker as Nick Jackson first executed a 450 splash and then Matt Jackson avoided a subsequent springboard 450 splash from Cash Wheeler and answered with a super kick to earn the pinfall and the tag team titles.

After months of feuding between these two men, including their match at All Out where Hardy took an ugly bump, this evening should prove to be the climax of their rivalry. What is an “Elite Deletion Match?” Your guess would have been as good as mine as no details were divulged in advance of this encounter. The match kicked off at the Hardy Compound in Cameron, North Carolina as Sammy drove his golf cart onto the grounds only to have it run over by a monster truck driven by Hardy. This then immediately turned into hardcore, backyard brawl before it spilled into the wrestling ring in Hardy’s yard. The bout quickly turned to a three on three melee as Sammy’s Inner Circle cohorts Santana and Ortiz came to his assistance, however, Hardy’s protégés Private Party soon assisted him. As Hardy appeared primed to put away Guevara, he was distracted by a masked man attacking The Hurricane! The masked man was then revealed as Gangrel - make it a four on four affair as The Hurricane sided with Hardy and Gangrel with the Inner Circle.

Hardy and Guevara then found themselves segregated from the other men inside the shed on the Hardy Compound which contained yet another ring with a ladder and table set up within. Guevara found himself in control briefly as he laid Hardy out on the table. Sammy then proceeded to scale the ominous ladder and propelled Matt through the table with a Swanton Bomb. This couldn’t put Hardy away as he got back to his feet and hit the Twist of Fate. Sammy also kicked out of this so Hardy proceeded to brutalize Sammy with several chair shots before he finally covered him for the pinfall.

This match held significant implications as the stipulation indicated if MJF were to come out victorious, he would earn membership in Jericho’s Inner Circle. Jericho pulled out all the stops and then some as he continues to amaze in the ring at age 50. Jericho executed a perfect Lionsault and Frankensteiner, however, MJF was able to cheat his way to victory in the end. MJF had Wardlow make his way to ringside and distract the referee as he attempted to strike Jericho with the Dynamite Diamond ring. After MJF missed, Jericho was tossed a baseball bat by Jake Hager who emerged at ringside. MJF saw the strike coming and preemptively dropped to the canvas to make the referee believe Y2J struck him. As Aubrey Edwards reprimanded Jericho, MJF rolled him up for the pinfall to become a member of the Inner Circle.

In arguably the biggest match of his 18 year career, Eddie Kingston found himself in the main event of the evening vying for the AEW Heavyweight Championship against Jon Moxley. This match became personal due to the extensive history between the two dating back to the independent scene and Kingston’s claim that he never gave up in their previous encounter (as he passed out from the submission hold applied by Moxley) - hence it’s evolution into an “I Quit” match. This was a brutal, bloody affair complete with barbed wire, tacks, and chairs - Kingston even poured a full bottle of rubbing alcohol on the back of Moxley after it was punctured with tacks as the result of a suplex into a pile of them. The conclusion of the match saw Moxley wrap his forearm in barbed wire and proceed to cinch in a chokehold that prompted Kingston to utter the words, “I Quit.” 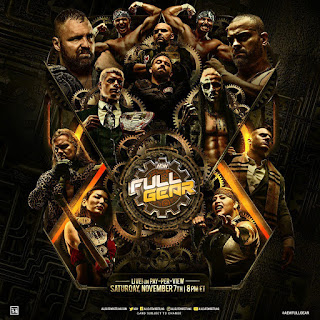