Just one week following Clash of Champions, WWE returned with NXT Takeover 31 from the brand new Capitol Wrestling Center at the WWE Performance Center in Orlando, Florida. Essentially, the Capitol Wrestling Center is a scaled down version of the Thunderdome as WWE has again implemented the virtual fans with the primary difference being Performance Center athletes, family, and friends also surrounding the ring. The event also marked the debut of Wade “Bad News” Barrett on commentary with Vic Joseph and Beth Phoenix - a much needed infusion of life since the departure of Mauro Ranallo. The concise card featured five bouts with four titles on the line and was headlined by Finn Balor going head to head with Kyle O’Reilly for the NXT Championship.

Takeover kicked off in electrifying fashion as the man formerly known as Punishment Martinez in Ring of Honor defended his North American Championship against Johnny Gargano. This hard-hitting contest fired on all pistons from the opening bell. One of the most brutal spots of the match evolved as the two men battled in front of the announce table where Priest hoisted Gargano up into the Razor’s Edge and propelled him so his spine collided with the edge of the ring apron. Following a low blow that caused a momentum shift late in the match, Priest was still able to prevail as he executed The Reckoning to solidify the victory.

This grudge match evolved after each man essentially cost the other their respective title opportunities for Takeover. Like the opening contest, this one also got off to a ferocious start as Kushida ambushed Dream in the midst of his entrance. The advantage did not last long as Dream was able to assert control over the contest by engaging in his well known mind games. Kushida was able to withstand the Dream Valley Driver and The Purple Rain Maker to systematically dismantle Dream’s left arm. The final moments of the match saw Kushida cinch in The Hoverboard Lock as Dream attempted another Dream Valley Driver and he sustained the hold throughout as he forced Dream to tap out.

Since the demise of 205 Live, the Cruiserweight Championship has been adopted by NXT. Tonight’s bout featured two men who had their personas manipulated in typical WWE fashion shortly following their arrivals. First, we had the champion, Santos Escobar, who may be better known as El Hijo del Fantasma. In his case he debuted under that moniker until he unmasked himself and formed Legado del Fantasma. Escobar’s opponent, Isaiah “Swerve” Scott, was formerly known in Ring of Honor as Swerve Strickland. Swerve was able to execute the impressive 450 splash late in the bout, however, it wasn’t enough. The two proceeded to jockey for position on the ring apron as Swerve was knocked down and inadvertently struck his head on the steel ring post. This opened the window of opportunity for Escobar who hoisted him up in a double underhook and drove Scott’s cranium into his knee to allow him to earn the pinfall.

Late in the match Shirai appeared to be in dire straits after the referee was inadvertently knocked out and LeRae’s husband, Johnny Gargano, made his way to the ring in a referee’s shirt. As the referee came to, Johnny Gargano was able to distract him while LeRae took the title and decked Shirai with it. This just wasn’t enough as Shirai first executed a perfect Spanish Fly and then immediately followed through with the Over The Moonsault to retain her title.

After Karrion Kross was forced to relinquish the NXT Champinship immediately after he defeated Keith Lee for it due to injury, Finn Balor quickly emerged as the new champ. This evening he was pitted in his first defense against the Undisputed Era’s Kyle O’Reilly. This opportunity was substantial for O’Reilly as he has been known throughout his career as a tag team specialist primarily alongside Bobby Fish and has never competed in a singles match at a Takeover event. Kyle O’Reilly certainly brought his A-game this evening as his submission prowess was on full display, however, The Prince was able to withstand the challenge as he finished him off with the Coup de Grace to retain his title. 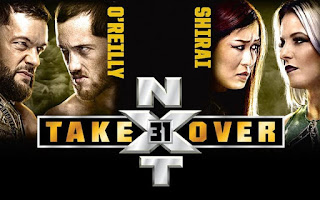