The Quarantine Era continued into month number eight this evening as Hell In A Cell emanated from the Thunderdome (Amway Center) in Orlando, Florida. This continues to be an interesting decision in my opinion as not only AEW, but also other professional sports have embraced a limited return for fans - after all, you would think there has to be several outdoor venues in Florida that would gladly host WWE with limited capacity. Nonetheless, this evening’s card boasted six matches with four titles contested and was headlined by Randy Orton and Drew McIntyre going toe to toe in the ominous Hell In A Cell.

Universal Championship Hell In A Cell I Quit Match

Following last month’s embarrassing loss to his cousin where his brother Jimmy threw in the towel for him, Jey found himself in a rematch for the Universal Championship this evening. This time the match would be escalated to an even greater level of intensity as the cousin’s battled within the carnal Hell In A Cell with the brutal addition of an “I Quit” stipulation where you must make your opponent give up. Sadly this match was another abomination with more of Roman preaching to his cousin than anything else. After Jey was beaten “senseless” but refused to quit, the ring was rushed by WWE officials. Following their futile efforts to get Roman out of the ring, Jimmy Uso came to his brother‘s aid. Roman seemingly listened to some sense but instead proceeded to put Jimmy in a guillotine choke for his efforts. Jey finally proclaimed the words “I quit” to save his brother leading the anticlimactic end to this “contest.” Following the match, Roman was met on the stage by his uncle Afa and father Sika (the legendary Wild Samoans) where they anointed him the new “head of the table.”

Elias made his return from injury during the WWE Draft a couple weeks ago following a five month layoff that was attributed to being hit by a car driven by Jeff Hardy during the DUI angle they were involved in with Sheamus at the time. Elias immediately targeted Hardy leading to their first ever meeting in the squared circle this evening. Just as the contest was building momentum, Jeff Hardy followed Elias to the outside of the ring where he retrieved his guitar. Hardy intercepted Elias, took his guitar, and demolished it over him leading the referee to call an abrupt end to the match.

Winner: The Miz via pinfall

Following a courtroom segment on Friday Night Smackdown with JBL presiding, it was ruled that Otis would need to defend his Money In The Bank briefcase against The Miz leading us to their showdown this evening. Otis controlled the tempo for the majority of this bout which prompted John Morrison to attempt to intervene with the briefcase, however, the referee put a stop to it and he was banned from ringside. In a shocking turn of events, The Miz was laid out on the canvas and Otis proceeded to propel himself off of the ropes but was met with a strike to the back with the briefcase by his “best friend” Tucker. This allowed The Miz the opportunity to cover Otis for the pinfall as he became the new holder of the Money In The Bank briefcase.

Following the nuclear fallout of their friendship, Sasha Banks challenged Bayley and her 380 day reign as champion to a Hell In A Cell Match. This match was better than the Hell In A Cell which opened the show, however, that isn’t saying much. In the closing moments of the bout, Bayley seemed to be moments from retaining her title as she brutalized Banks with several chair shots and the Bayley To Belly, however, Sasha kicked out of the subsequent pinfall attempt. Bayley then attempted the Bayley to Belly again with the use of a chair but Banks pulled off a sloppy reversal that propelled Bayley’s head into her own chair. Sasha took advantage of this as she trapped Bayley’s head in the chair and cinched in the Bank Statement for the submission victory as a new champion was crowned.

The developing feud between The Hurt Business and Retribution picked up steam recently as Mustafa Ali was revealed as their leader. This evening’s title contest came to fruition on the Kickoff Show as Ali challenged The Hurt Business to a match. MVP accepted the challenge and proclaimed that Bobby Lashley would defend his United States Championship against Slapjack (yes, you read that correctly) of Retribution. Bobby Lashley dominated Slapjack from the opening bell and with the exception of some brief offense on the part of the Retribution member, this was a very one-sided contest that ended with Lashley cinching in The Hurt Lock for the victory.

Following his loss last month to McIntyre in the Ambulance Match at Clash of Champions, Randy Orton maintained his fixation on the WWE Championship and vengeance as he has continued to focus all of his efforts towards a rematch with the champ. Orton wasted no time taking the fight to McIntyre this evening as he disguised himself as a ringside crew member allowing him to get the jump on Drew. This didn’t prove to pay the dividends Orton had hoped for as McIntyre controlled much of the early going. Orton finally turned the tide as McIntyre was met with a steel chair when he attempted to close out the bout early. The Viper then took the opportunity to unleash his sadistic side as McIntyre was forced to endure attacks with chairs, the ring steps, and his face being grated against the cage. As Orton felt his advantage slipping, he used bolt cutters to escape the cage and lured McIntyre to the top of the imposing structure.

As this plan didn’t progress as Orton hoped, he again baited McIntyre to climb down the side of the cage aligned with the announce table. As they were halfway down the side of the cell, Orton pried the champ’s fingers loose and launched him off the side of the cage and through the announce table below. McIntyre willed himself back into the cage and alluded an RKO which he answered with a Claymore Kick. Orton managed to roll out of the ring to avoid the pinfall and recover. After slowly rolling back in, he dodged a second Claymore Kick attempt and answered with an RKO which allowed him to pin McIntyre crowning himself as the new world champion for the 14th time. 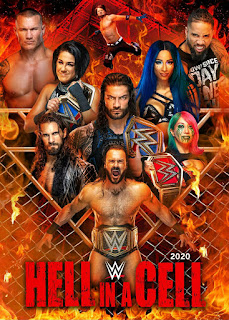