Showtime executive Stephen Espinoza came under heavy scrutiny in 2019 for the network's boxing coverage. Desirable PBC events went to Fox pay-per-view or Fox cable networks, while Showtime had to settle for pedestrian fight cards. In the wake of HBO's departure from the sweet science, it was fair to wonder if premium TV wasn't long for boxing.


To Espinoza's credit, he and the network remained steadfast in their dedication to boxing, rolling out a stellar schedule for the first quarter of 2020. By the time Showtime arrived in Brooklyn for its Jan. 25th broadcast, the network had already staged two previous events in the year. Claressa Shields kicked the year off with a Jan. 10th title defense over Ivana Habazin, and Shohjahon Ergashev headlined a Jan. 17th ShoBox from Sloan, Iowa. These entertaining events provided upsets- such as Elin Cederroos' triumph over Alicia Napoleon Espinosa- and viral knockouts, like Ergashev's sickening body shot stoppage of Adrian Estrella.

However, it would be a herculean task to maintain this success throughout the year. And indeed, Showtime's momentum fell flat at the Barclays Center. The night featured a triple-header of Stephen Fulton vs. Arnold Khegai, Jarrett Hurd vs. Francisco Santana, and Danny Garcia vs. Ivan Redkach. Many in boxing circles had correctly predicted that Fulton vs. Khegai would steal the show; what pundits didn't anticipate was the co-main and main event being comprised of 22 uncompetitive rounds of boxing.

The super bantamweight scrap between "Cool Boy" Fulton and Khegai offered a terrific clash of styles. Khegai, the bruiser, used relentless pressure and dirty tactics to bully Fulton in early rounds. A pure boxer, Stephen survived these scares and used his superior footwork to claim a wide decision. Similar to fellow Philadelphian Jaron "Boots" Ennis, Fulton used Showtime's exposure to put himself on the map with an early 2020 victory.

The night's malaise started with Jarrett Hurd's tune-up fight with Francisco Santana. A journeyman who was fighting up a weight class, Santana posed no threat to Hurd. The fight amounted to a 10-round sparring session; an opportunity for Hurd to shake off the ring rust after he'd been unseated for the WBA and IBF titles by Julian "J Rock" Williams. As Paulie Malignaggi astutely pointed out on the Showtime Boxing Podcast, there's nothing wrong with Hurd taking this type of fight to ease himself back into contention. The problem is subjecting premium TV viewers to a fight devoid of stakes. Whereas Fulton's fight whetted the public's appetite for a world title shot, Hurd's fight had an opposite effect. Rather, many fans wondered aloud what happened to the old Jarrett Hurd.

Accomplished welterweight Danny "Swift" Garcia closed the show with a stay-busy fight against Ivan Redkach. While not an ideal main event, the fight was practical as each boxer had more preferable matchups fall through in a similar timeframe. Garcia had been slated to face Errol Spence Jr. before "The Truth" was injured in a car crash. Meanwhile, Redkach was reportedly set to fight Adrien Broner, before myriad legal issues sidelined the Cincinnati native.

Redkach's cagey nature, coupled with Garcia's counter-punching prowess, ostensibly could have led to fun exchanges and an early night. This was not to be, as Redkach's inability to close distance led to a shutout decision win for Garcia. The only memorable moment from the fight came when Redkach bit Garcia's shoulder in the eighth round.

Garcia did all that he could to finish Redkach, and in his post-fight interview cited frustration with referee Benjy Esteves for not stopping the fight. The remark was warranted. Following a brutal 2019 which saw two boxers in US events succumb to injuries suffered in the ring, a sport-wide priority needs to be circumventing senseless punishment. After the 7th or 8th round, when it was plainly obvious that Redkach had no path to victory, either Esteves, a ringside physician, or trainer Jack Mosley should have stepped in to stop the contest.

Though the fight won't be remembered as a fan favorite, Garcia's win left him well-positioned for a potential pay-per-view showdown with Manny Pacquiao. And, similarly, Showtime remains primed for a bounce-back 2020 despite Saturday's misfire. ShoBox has two events scheduled through February, and Gary Russell Jr.'s Feb. 8th featherweight title defense against Tugstsogt Nyambayar has the potential to be a Fight of the Year candidate. Boxing is better off with Showtime at the top of its game; let's hope Saturday night proved to be an anomaly. 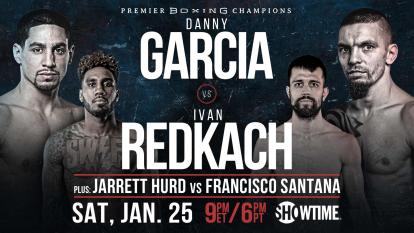