The Red Bank Armory is located at 76 Chestnut Street in Red Bank. The historic building dates back to 1914, and was the home of the New Jersey Army National Guard’s Troop B of the Cavalry. A major feature of the armory was the 100x144-foot equestrian riding hall. By the 1950s, the armory was used as a storage space for old tanks. In 1998, the armory was purchased from the state and converted into an ice rink. The rink is home to a number of local hockey teams including the Red Bank Generals of the New Jersey Youth Hockey League and the nearby Red Bank Catholic High School Casey’s hockey team. The facility’s rinks are also used for ice skating lessons. I had the opportunity to tour the building in May of 2017, and was amazed by how wonderfully preserved the building is. It is a standing testament to the value of repurposing historic buildings for the sake of preservation!


Other than for military and ice hockey purposes, the building has also hosted a series of professional and amateur boxing matches. The most notable professional bouts occurred in 1925 and 1948.

A charity card for disabled children was put on by the Asbury Park and Long Branch Benevolent and Protective Order of Elks at the Red Bank Armory on August 7, 1925. The card was arranged by John Leon, a matchmaker for Coney Island Stadium in Brooklyn. This event attracted over 4,000 fans that enjoyed an evening of thrilling fights. The main event of the card featured flyweight boxing champion Frankie Genaro and bantamweight pugilist George Marks, who agreed to fight at bantamweight.

Frankie Genaro was a boxer from New York City who fought professionally from 1920 to 1934. Prior to turning professional, the five foot and one inch boxer captured a gold medal at the 1920 Antwerp Olympic Games as a flyweight boxer representing the United States of America. Over the course of his long career, he fought over 100 times and captured titles in the flyweight division. Following his long boxing career, Genaro pursued a career as a horse jockey in France. He died in 1966 at the age of 65. Genaro was inducted into the International Boxing Hall of Fame in 1998.

His opponent that summer night in Red Bank was an English born fighter billed out of Los Angeles, George Marks. Marks was a contender in the bantamweight division who captured the Pacific Coast Bantamweight title during his nine year professional career that lasted from 1917 to 1926. In 1933, Marks was tragically killed at the young age of 32 in an automobile accident in Azusa, California.

This was the second encounter between the two men in the squared circle. Genaro had defeated Marks in June of 1925 at Coney Island Stadium in Brooklyn. The actual events of the contest, that was billed as “one of the most stirring boxing events ever carded in the state of New Jersey”, differed based on what local newspaper you read. According to The Red Bank Register, Genaro took five rounds and Marks won two. The two fighters split the other three rounds. Reporters from the Asbury Park Press were also in the press section that evening. They reported that Marks won every round with the exception of possibly the ninth “when Genaro probably conscious that Marks was getting the better of the breaks attempted to make a desperate try to even things up.”

Because reporters from both papers saw the fight differently, the fight was ruled a newspaper decision draw. A newspaper decision was utilized in the early 20th century after a fight ended with no decision from the judges and referee. In this scenario, reporters from a local newspaper(s) would decide who won the fight. As you can imagine, these decisions were, at times, heavily lopsided in favor of a hometown fighter. This method of scoring is no longer utilized in modern boxing.

The evening also had three other boxing matches featuring Tommy Jordan versus George Levine, Rene De Vos versus Lew Ferry, and Willie Dillon versus Erwin Bige. Belgian middleweight champion Rene De Vos, who is often listed as one of the greatest boxers not in the International Boxing Hall of Fame, took on Lew Ferry of Newark, New Jersey. Ferry was a veteran of the Jersey Shore fight scene, having fought there on numerous occasions. De Vos walked away the winner via newspaper decision after both The Red Bank Register and the Asbury Park Press scored the bout in favor of the Belgian.

Brooklyn based boxer Tommy Jordan and California’s George Levine squared off in a welterweight contest. The fight was described by the local media as having “all the earmarks of a championship bout from the start.” Levine won the bout via newspaper decision after The Red Bank Register scored the contest a draw, and the Asbury Park Press scored the fight for Levine.

The opening bout of the evening featured Omaha’s Erwin Bige, who weighed in at 121 pounds, and New York’s Willie Dillon, who weighed seven pounds heavier than his opponent. The weight advantage had no impact on the fight’s outcome, as Bige cruised to a newspaper decision over his opponent after ten rounds of boxing. Both The Red Bank Register and Asbury Park Press scored the fight in favor of the Nebraskan.

Professional boxing returned to the Red Bank Armory on October 12, 1948. This card had far less star power than the show 13 years earlier, and featured a card loaded with fighters from the tristate area such as Philadelphia’s Danny McCall, Newark’s Jimmy Stamford, and Asbury Park’s Don Layton. The main event featured middleweights Milton Lattimore and Billy Ellison. Lattimore, a New York City fighter, was originally supposed to face Tony Rose. Rose was replaced prior to the bout by Billy Ellison of Newark. The six round main event ended in favor of the replacement fighter, Ellison, who won by points. Before retiring in 1949, Ellison fought three of his final four bouts in Atlantic City. Lattimore retired in 1951 with an even professional record of 26-26.

This venue was also the site of numerous amateur boxing shows from the 1930s to 1970s. These cards often pitted local Police Athletic League (PAL) chapters against one another, including the Red Bank and Middletown PALs. The rich sports history of this building coupled with the building’s current position in the world of hockey will ensure that the Red Bank Armory will be an important part of the Red Bank community for many years to come. 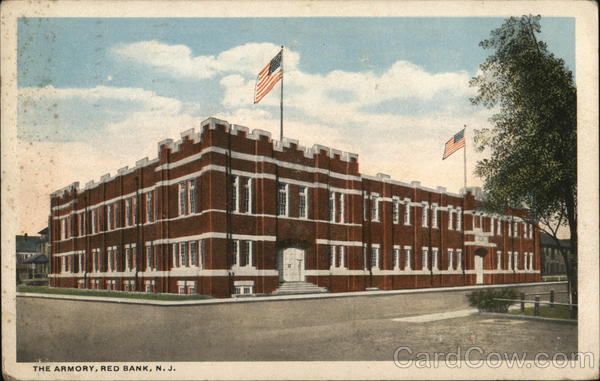