On Saturday night from Temecula California, Top Rank Promotions and ESPN (10 p.m. ET/4 p.m. PT) will broadcast a fight card that’s main event will feature the beginning of the path towards an undisputed king.  The quest for lightweight supremacy begins as IBF lightweight champion Richard Commey (28-2, 22 KO’s) defends his title for the first time against former world champion and grizzled veteran Ray Beltran (36-8-1, 22 KO’s).  When Mikey Garcia decided to vacate the WBC portion of the lightweight crown back in April after his loss to welterweight champion Errol Spence, it meant that the biggest fight in the division between Garcia and the WBA/WBO champion Vasiliy Lomachenko would have to once again be placed on hold.

With Garcia now set to face Danny Garcia at welterweight, it meant that the division could now move on from the unification fight between Garcia and Lomachenko and allow for the rest of the world class talent a chance to stake their claim as the king of the talent rich division.  Lomachenko (a top pound-for-pound fighter) and already a unified champion in the division is clearly the proverbial favorite to be the last man standing when the dust settles.  This brings us back to what will take place this weekend between Commey and Beltran.

Commey, the hard-punching champion from Ghana, won the IBF portion of the crown in February when he blasted Isa Chaniev with power shots in two rounds to earn the knockout win.  It was supposed to have set up Commey with the chance to unify his titles with Lomachenko in April.  However, due to a hand injury sustained during his title winning victory, it caused a need for surgery and Lomachenko to look elsewhere for his next opponent.

Beltran himself has had to navigate a twisting path towards this opportunity to have his name listed as the divisions king.  It was just last year that Beltran, after a long career that had seen its ups and downs, finally captured a world championship when he defeated Paulus Moses.  In his first defense of the WBO title in August, he dropped a decision to Puerto Rico’s Jose Pedraza.  Going into that fight (like the Commey situation this year), it was believed that with the victory over Pedraza, Beltran would be next in line for Lomachenko and the seven-figure payday that accompanies that type of fight.  Unfortunately for Beltran, Pedraza not only won the WBO title but would get the fight last December with Lomachenko.  With a comeback knockout victory last February, Beltran has now placed himself into a prime position to challenge Commey for another portion of the lightweight crown.

“Being a world champion is great.  I went back home, and everyone welcomed me at the airport.  It was like a hero’s welcome, it was unbelievable,” stated Commey during the final press conference this week.  “I never try and knock out my opponent.  It comes when it comes.  I believe he’s a strong guy, a tough guy, and so am I.  It’s going to be a good fight, but I’m the champion, and I’m going to keep my belt.”

It’s clear that Commey has taken to the role of favorite for this fight as the champion, but for Beltran being an underdog is par for the course for him at this point in his twenty-year career.  “I feel like I made it the hard way.  Even when the sport or boxing world didn’t believe in me, that’s when I had to believe in myself,” expressed Beltran.  “Nobody gave me an opportunity, I had to go and take it.  I became a world champion and I am fighting for another world title.  It’s not about if people believe in you.  You must believe in yourself.”

Both fighters are clearly focused on the task at hand and through their words one can tell that they are not taking this opportunity to prove that they are elite lightly.  Having both missed out on an opportunity to fight for bigger fight purses, each fighter clearly is aware what victory and defeat can mean to their careers.  What should also be promising for fans is the fact that both men are hard nosed both in their approach to the sport in terms of preparation, but also in how they fight inside of the ring.  They do not shy away from trying to find their opponents and are happy to exchange power shots to inflict punishment.  In other words, get ready for a fight that has the potential to provide fireworks and bombs for as long as the warfare lasts.

With a fight between the sport’s top young sensation lightweight Teofimo Lopez and veteran Masayoshi Nakatani scheduled for July 19th as an IBF title eliminator, whoever survives the fight on Friday night and steps out of the ring with the IBF title will have his eyes focused on that ring in July.  In fact, Lopez will have his eyes on the ring Friday since he is scheduled to be in California to watch Commey and Beltran do battle from ringside.

Lopez has not been shy about wanting to prove to the world that his days as “top prospect” are behind him.  He has been vocal in calling out the unified champion Lomachenko and with this road to crowning an undisputed lightweight king getting underway.  Lopez will have his chance with just two victories during the remainder of the year to not only fulfill his dream of becoming a world champion, but also, to put himself in the prime position to challenge Lomachenko to become undisputed champion.

A wild card has been thrown into the mix since there still is that issue of the WBC title being vacant.  While it seemed that Luke Campbell, the former 2012 Olympian, would somehow be involved as one of the fighters with top contender status in the WBC rankings, what became interesting was that the WBC named Lomachenko also as a top contender in their rankings despite holding two other portions of the crown.  As a result, there have been plenty of news circulating that a unification fight between Campbell and Lomachenko tentatively scheduled for late August in London is all but set.  Campbell could walk into a London ring with no titles, and if he were to pull off the mega upset, would walk out of that ring with three of the four portions of the undisputed lightweight crown.

However, if all goes as expected late this summer across the pond, Lomachenko will add that WBC title to the other two portions of the crown he already holds and will await the fighter who survives this small tournament that gets underway Friday night to decide the IBF title.  Whichever way things will pan out in the division, by this time next year, barring any drastic changes or outside of the ring mishaps, fans of the sport should be happy to know that finally a talent rich division will have the elite champions and contenders fight to crown one undisputed king at lightweight. 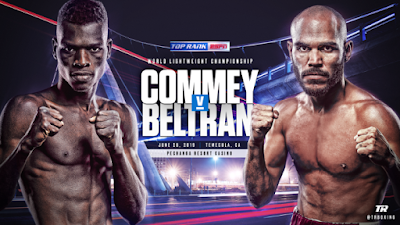