The seventeenth installment of Impact Wrestling’s Slammiversary emanated from a sold out Gilley’s Complex in Dallas, TX this evening. The stacked card featured eight matches and was headlined by Tessa Blanchard battling Sami Callihan in an intergender match. Impact Wrestling continues to put forth a solid product as they have shown true perseverance after several years of turmoil within their ownership structure that had them on the brink of disaster and they needed to deliver again this evening with the quickly evolving landscape of professional wrestling. Impact did just that but only time will tell how things shape up with AEW coming on strong as their weekly tv program debuts on TNT in October, Ring of Honor is maintaining their foothold with their partnership with NJPW, and of course WWE -despite their stale writing and booking- is still the standard bearer in sports entertainment.

TJP vs. Trey Miguel (of the Rascalz) vs. Jake Crist (of OVE) vs. Willie Mack
Winner: Willie Mack via pinfall

The opening contest of Slammiversary was an X-Division fatal four way attraction featuring TJP (T.J. Perkins) in his first pay per view appearance since his return from being buried in WWE on 205 Live. The action was fast and furious and certainly set the tempo for the evening. The body flying action culminated with the 285 lb Willie Mack executing a frog splash on Jake Crist to solidify the pinfall victory.

After shockingly losing their tag team titles to The North Friday night at Bash at the Brewery - an Impact Plus event that literally looked like it was in front of a crowd of 100 people at a brewery - LAX entered as the challengers. Unfortunately for The North, the retention of their titles was overshadowed in this one by a bad landing Santana took that required him to be helped out of the arena after the contest.

After weeks of mind games initiated by Killer Kross including the destruction of Edwards’ best friend Kenny - the kendo stick - Edwards achieved retribution this evening as he made Kross bleed by raking the splintered edge of a kendo stick across his mouth.

For several weeks, Moose proclaimed that the old legends needed to retire and go away. This generated a brief feud between Moose and The North and ECW originals RVD, Tommy Dreamer, and Sabu. This short lived program seemingly reached it’s climax this evening in Dallas as Rob Van Dam stood toe to toe with Moose. First things first, RVD may be 48 but he certainly can still keep up with the best of them and has aged pretty well considering the wars he’s been in as he doesn’t look much different than the last time he had a significant run in WWE - with the exception of appearing to enjoy a few beers here and there. It appeared RVD would walk out victorious as he had Moose laid out on top of a chair as he scaled to the top rope for the Five Star Frogsplash. As Van Dam took flight, Moose rolled out of the way leaving nothing but unforgiving steel for RVD to land on. Moose jumped to his feet and nailed RVD with the spear for the pinfall.

These ladies wasted no time after the opening bell as they rapidly transformed the ring into a visceral playground littered with chairs, ladders, tables, and eventually thumb tacks. Havoc seemed poised to solidify a dominating victory after she Tombstoned Su Yung from the top rope - yes you read that correctly - onto a bed of tacks but Taya Valkyrie returned to the ring and greeted Havoc with a chair to the face. As Havoc rolled out of the ring, Valkyrie covered Su Yung to retain her title.

Two of the best high-fliers in not only Impact, but potentially all of pro wrestling, squared off for the storied X Division Title this evening. After a fairly even bout where neither man was really able to create much momentum, Rich Swann was able to persevere. In the closing moments of the match, Swann withstood a series of Spanish Flys (the first from the top rope), Starship Pain, and the antics of Johnny Bravo at ringside to answer with two springboard cutters and the Phoenix Splash to retain his title.

Former Ring of Honor and New Japan star Michael Elgin made his in-ring pay per view debut this evening as he challenged “The Machine” Brian Cage for the Impact Heavyweight Championship. Cage wasted no time bringing the fight to Elgin as the first time Elgin rolled to the outside of the ring, Cage ensured there would be no reprieve for him as he ran and vaulted straight over the top rope to the arena floor taking out Elgin and landing on his feet in the process. In the final minutes of the contest, Cage attempted the Drill Claw but his back “went out” and he dropped Elgin. Elgin answered with a buckle bomb and as he hoisted Cage up for the Elgin Bomb, The Machine slipped out and rolled Elgin up for the pinfall. After the match, Elgin assaulted Cage with the title and then dragged Don Callis into the ring from his commentary position. Just before Elgin was going to lay waste to Callis, a masked man entered the ring from the crowd, executed a spear that looked a lot like a Gore (wink wink), and escaped through the crowd.

A rarity in pro wrestling today, at least in televised matches and never in WWE, Impact decided to push the envelope and headlined this pay per view with an intergender match between Sami Callihan and Tessa Blanchard, the daughter of former Four Horsemen member Tully Blanchard. Blanchard made another huge step this evening as she continued her ascension from barely gaining air time in NXT towards becoming a bona fide superstar as she more than hung in with “The Draw.” Blanchard displayed her grit as she took some huge bumps in this bout but also demonstrated her impressive strength as she hoisted Callihan up for a Samoan Drop at one point. In the closing moments, Callihan escaped a crossface submission to finish Blanchard off with a Cactus Special piledriver allowing him to earn the pinfall. 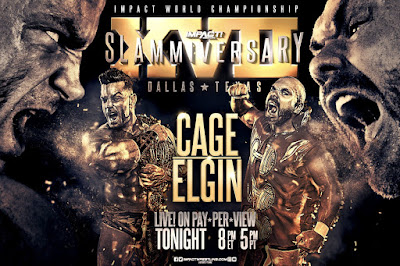