Ocean Casino Resort played host to Golden Boy Promotions Fight Night Live.  Broadcasted live on Facebook Watch, this fight card was the opening event for the Atlantic City Boxing Hall of Fame (ACBHOF) weekend.  With future International Boxing Hall of Fame inductee Bernard Hopkins being honored by the ACBHOF this weekend, it only made sense for Golden Boy Promotions to feature a fight card in the city honoring one of their own.

Ballard and Espadas have unfortunate No Contest

With the first round looking like it would just be a feel out round, D'Mitrius Ballard (20-0-1) (13 KO's) and Elias Espadas (18-4-1) (13 KO's) clashed heads when they both lunged in to land a power shot.  It resulted in a cut over the left eye of Espadas and the urgency forced a fire fight.  It carried into the second round and as both men threw with bad intentions, however, it was Ballard who landed the stronger shots that also made blood fly across the ring.

Doctors looked at the cut to start the third just as they did to finish the first and allowed the action to continue.  Thankfully that was the case since Espadas, who was losing the round, landed a clean hard right hand that buzzed Ballard who was on shaky legs for a bit.  Ballard was able to steady himself and regained control with thudding power hooks to the body and head.  Once the doctors checked on the cut again, the fight was called off in the third round, thus forcing a no contest.

A refocused and rejuvenated Eddie Gomez (23-3) (13 KOs) destroyed Saul Corral (30-14)(20 KO's) in just two rounds.  The fight was stopped after four knockdowns were scored by Gomez.  He landed good left hooks to both the head and body of Corral, who was tough, but couldn't take the pressure.

New to the Golden Boy stable, Franchon Crews (5-1)(2 KOs) blasted the tough Kayla Williams (0-3-1) out after five rounds.  Crews landed right hand power shots at will and worked the body early, until Williams seemed to run out of gas.  The fight was halted at the 1:40 mark of the fifth round.

***
Raul "Chino" Rivas continues to have an impressive stable; this time it was local super middleweight Gabriel Pham (11-1)(5 KO's) using his southpaw stance, height, and reach advantage in order to frustrate Jaba Khositashvili (4-1)(2 KO's) over six rounds.  Khositashvili wasn't bothered by the size disadvantage early in the first round until Pham landed a straight left hand that dropped him to his knees.

For the rest of the fight, it was Pham who controlled the pace and distance of the fight.  After the final bell rang, it was a matter of hearing just how wide the judges would score this fight in favor of Pham. Scores were 59-54 twice and 60-53 for Pham.

Mike Reed (25-2)(13 KO's) and Angel Hernandez (15-14)(9 KO's) had a real good eight round battle in the welterweight division.  Reed, the Washington D.C. native, boxed well out of his southpaw stance to easily win the first two rounds.  In the third, Hernandez landed a big right hand that got the attention of Reed, who elected to trade shots on the inside.

Whenever Reed seemed to take a few too many shots from Hernandez, he was able to get on his toes and box well from the perimeter of the ring.  Reed had plenty of supporters in the crowd and they cheered him on as he battled with Hernandez in the final round.  Both fighters had their moments, but it was Reed who landed more consistently and with the cleaner shots throughout the contest.  Scores were 79-73 twice and 78-74 in favor of Reed.  Afterwards Reed stated the following about the fight, "this was a very tough fight,. It was exactly what I needed right now.  I'm looking for a world title at 135 or 140, I feel really good."

***
George Rincon (7-0) (4 KOs) of Dallas won in impressive fashion by knocking out the tough Greg Young at the 2:01 mark of round three.  Rincon is a good young prospect to keep an eye out for.  He works well with combination punching, has a strong frame, and has nice head movement which allows him to cut the ring off.  Also, he worked well to the body and then the head, which helped him score a knockdown in round one and eventually score the winning knockdown in the third.

***
Dan Murray (5-2) won a unanimous decision over Leonard Kenon (3-6)(1 KO).  Murray was the more active fighter and landed the cleaner shots throughout over the game Kenon. 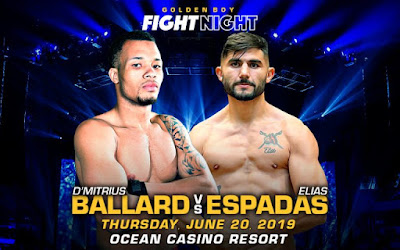