Saturday night in Las Vegas is no doubt another chance for the glamour division of the sport to bask in the spotlight of the sporting world as Tyson Fury (27-0-1) (19 KO’s) defends his lineal championship against German Tom Schwarz (24-0) (16 KO’s).  After the shocking results at Madison Square Garden that saw Andy Ruiz win portions of the heavyweight crown by knocking out the unbeaten Anthony Joshua, Saturday is a great chance for Fury to solidify his claim as the “baddest” man on the planet (a moniker which comes with being the best heavyweight in the world).

While Fury fights for the first time since his draw against the other champion thought of as one of the best, Deontay Wilder, and begins his partnership with promotional juggernaut Top Rank, the undercard features a co-main event that easily is worthy of its own main event status when Philadelphia native Jesse Hart (25-2) (21 KO’s) battles Sullivan Barrera (22-2) (14 KO’s) in a ten round light heavyweight contest.  Also, on the undercard is heavyweight and Top Rank prospect South Philadelphia’s future real life “Rocky” Sonny Conto (2-0) (2 KO’s).

Since his last fight, a second go around defeat at the hands of former WBO super middleweight champion Gilberto Ramirez, Hart has continued to reinforce that it is only a matter of time before he is known as a world champion.  His quest for the super middleweight crown was well documented by this writer prior to his first clash with Ramirez in the fall of 2017.  After the close defeat, Hart regrouped with the knowledge that he was one point away from fulfilling his dream.  Three knockout victories and a year later saw Hart back in the ring with Ramirez.  It seemed entering the final rounds that Hart would clear the Ramirez hurdle, but he was hurt by an injured Ramirez and the result wound up being the same.

With the two Ramirez fights being the only blemishes on his record, and Ramirez stating his desire to move up and join the talent loaded light heavyweight division, it was thought by many that Hart was poised to stick around the 168-pound super middleweight division and not only finally win the vacated championship by Ramirez, but in doing so would set himself up for big pay dates against some of the other talented champions and challengers in the division.

It was a bit of a shock when he told The Weigh-In directly that he was planning a move up to join the rest of the talent at 175-pounds in the light heavyweight division.  He stated that he was planning on fighting a big name in his debut and had targeted former world champion, Sergey Kovalev conqueror Eleider Alvarez.  “That division is so full of talent and now I’m going to add my name to the mix,” stated Hart.  Kudos to Hart for making the decision to not play it easy and defeat a lesser challenge to earn the championship he craves, and for chasing both greener pastures and tougher terrain at light heavyweight.

Enter Sullivan Barrera (22-2) (14 KO’s), himself a former title challenger, who like Hart only has two losses. These defeats came at the hands of future Hall of Famer Andre Ward and the current WBA light heavyweight champion Dmitry Bivol.  At 37 years old, Barrera has been less active than the 29-year-old Hart and struggled a bit during his last fight back in November against the durable Sean Monaghan.  Barrera seemed a bit off during the early portions of the fight, maybe it was due to disinterest because just eight months earlier he was stopped in twelve grueling rounds in his championship bid against Bivol.  Whatever it was, Barrera handled himself like the true professional and wound up battering Monaghan in route to the decision victory.

With Alvarez dropping out of the proposed fight with Hart, Barrera was the name that filled in and allowed Hart to remain as the co-feature on this big night in Vegas.  Hart is never shy to speak his mind and has traded barbs with Barrera over social media. Recently, he informed the media on his thoughts regarding this fight in career terms and Barrera.  “The 175-pound division is wide open and I’m finally ready to win that world title.  Sullivan Barrera is in my way, so I am going to smash him,” stated Hart.  Barrera is indeed a seasoned veteran, but at the age of 37, the idea that a fighter can get “old” overnight is always close by.  “After Saturday night we’re going to put him (Barrera) into retirement, you’re not going to hear from him again,” said Hart.

Barrera puts all of that to the side and thinks its just Hart trying to avoid dealing with nerves he may be facing since he is moving up in weight. “Jesse Hart knows he’s never fought anyone like me, he is scared.  He is coming up from 168, but the punching power at 175 is not the same.  I am a different level than what he’s used to.  It’s going to be a long night for him,” remarked Barrera.

ESPN analysts, former world champions, and future Hall of Famers Timothy Bradley and Andre Ward also had interesting takes on this fight.  “I think it’s a good move for Jesse.  I thought that at 168 pounds he may have been zapping some of his strength to make the weight.  He is a big strong guy, so 175 may just be the better fit for him,” stated Bradley.  “This is going to be a good fight and is a good way to lead into the Fury fight.  Barrera is a seasoned fighter that is technically sound,” replied Ward.  Both agreed that the winner of the fight aligns himself for bigger fights and bigger purses against the rest of the division that is rich with talent.  With the champions (Kovalev, Bivol, Beterbiev, and Gvozdyk), seemingly on a collusion course to unify their titles.  If Hart can get by Barrera (who is ranked #7 in the division) he will stake his claim for a shot at one of those champions in the future.

Also, on this loaded undercard is the aforementioned heavyweight prospect Sonny Conto.  With just two fights as a professional, Conto is indeed at the prospect stage of his career.  He has the amateur pedigree that included being crowned a National Golden Gloves champion.  His stock was high enough that Top Rank signed him right away.  With both of his wins coming at home in Philadelphia in front of an adoring crowd (and Conto already has a nice size fan base at home to build off), it made sense for Top Rank to have him continue his nurturing process by taking part in a big fight week in Sin City featuring a current heavyweight champion.

Conto was flown out to Vegas where he spent time training and sparring with Fury as well as Joseph Parker, the only man to beat Andy Ruiz.  As Conto progresses inside of the ring, it will be a bit of time before we see the 23-year-old in a meaningful fight.  Especially a fight that begins the test to see just how far he truly can go.

Full of talent, Conto continues to progress that talent and build the foundation to handle big fight weeks and fight nights when his name will be the one in the lights.  “Sparring with a champion is great work for a young fighter.  You don’t want to be just a sparring partner though,” stated Ward.  Bradley also agreed with Ward, “Terrance Crawford spent time with me in camp before anyone knew his name.  I think for him it was just as good outside of the ring as it was in terms of the work that we gave each other.  He got to see how I handled myself as a champion and the way I dealt with my family.”  So just what does Conto think about his time sparring Fury, “It was awesome, a great experience, and priceless.” 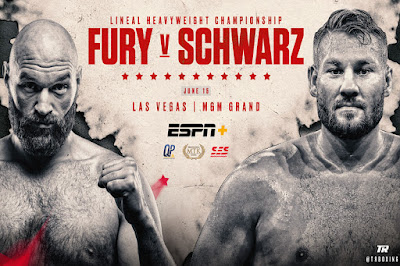